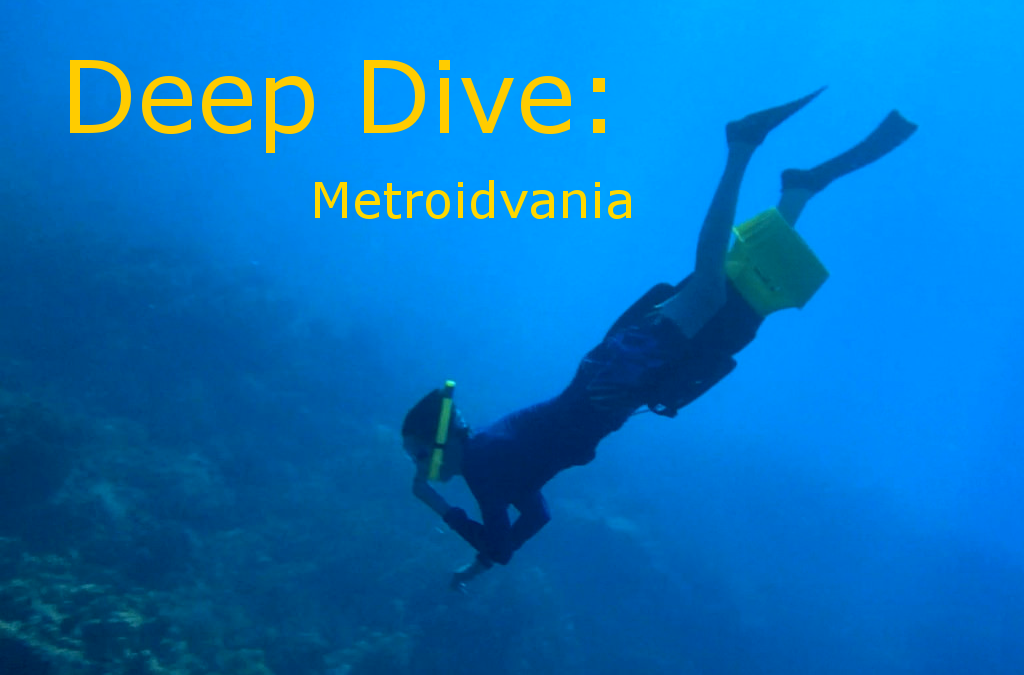 As we have discussed Metroidvania games recently, it would be a great time to introduce another series of articles I am interested in writing that I am titling “Deep Dive,” where we can take a closer inspection of a genre, game series or even particular mechanics. We were unable to discuss some other aspects of Metroidvania games in my previous article (“Learning with the Greats: The Metroidvania Sub-Genre”) so in this article we will continue our look at this sub-genre.

Another focus of this sub-genre is the stories they tell: a woman trying to rid the universe of a space-parasite, or an adventurer trying to prevent the return of Dracula by storming his castle. Your players will develop some muscle memory to your maps so you can introduce some other things to keep them interested. Story is great for this growing situation. You don’t want your player to think they are wasting their time by traveling over a specific part of a map over and over. By giving your player something story related to either listen to or read while traversing the now old sections of the map, they will still feel fresh and engaging. For example, a spacecraft survival game where the crashed spacecraft is headquarters and while exploring they may get a new message from a mothership or discover a piece of technology to decipher.

Exploring with and for New Abilities

A core mechanic of Metroidvania games as mentioned in my original article are the upgrades to the player. Upgrades progress the game but are also essential for accessing areas within previous zones to continue the search for upgrades. Upgrades from older zones tend to increase the maximum health, magic, and/or ammo capacity, but can also contain abilities if the player is meant to travel through that old zone to branch into new zones. As we all know, Metroidvania games are all about the back and forth nature of the map; this allows us developers to make very dynamic maps, but we also don’t want to make the players travel back and forth for no reason. Part of the fun in these games is obtaining new abilities and knowing what or where they are for—placing abilities in dead-end branches leaves players confused instead.

As mentioned several times now, maps are of the utmost importance, so, what happens when the environment changes from 2D to 3D? When the Metroid series made the jump to 3D with Metroid: Prime, it was met with a lot of hesitancy due to the unknown element 3D was at the time. The problem stemming from 3D, in my opinion, is not that Metroidvania games are inconceivable but rather we tend to lose ourselves, and our audiences, in the prospect that 3D games should focus on endless exploration. An ever expanding Metroidvania doesn’t work: these two concepts are, in my opinion, on opposing ends of the spectrum, but I would love to hear about what others believe about this (let’s chat in the comments!). I wholeheartedly believe that Metroidvania titles can make it in a 3D world, but the focus needs to be on the other elements and be balanced with them accordingly.

To wrap up, Metroidvania titles that gain appreciation are the ones that have level designs down, the combat (If there is any) feels right, and the player is always filled with a clear sense of direction or purpose. Being keenly aware of your player’s interactions with each portion of your map should reveal ideal locations to hide upgrades or taunt the player to come back later to access that out of reach platform, the payoff being that now they should be filled with excitement to use that new ability in every corner of the map. The essence of the Metroidvania sub-genre is making exploration a challenge, even exploring that “stuck” feeling briefly (being “stuck” can kill games, but a little bit can help break up that “on-rails” feeling) before giving them something new. They should be reinvigorated; rinse, repeat, and you’re done if it isn’t too short of an experience.