Getting Started! How to Appear Employable for the Games Industry 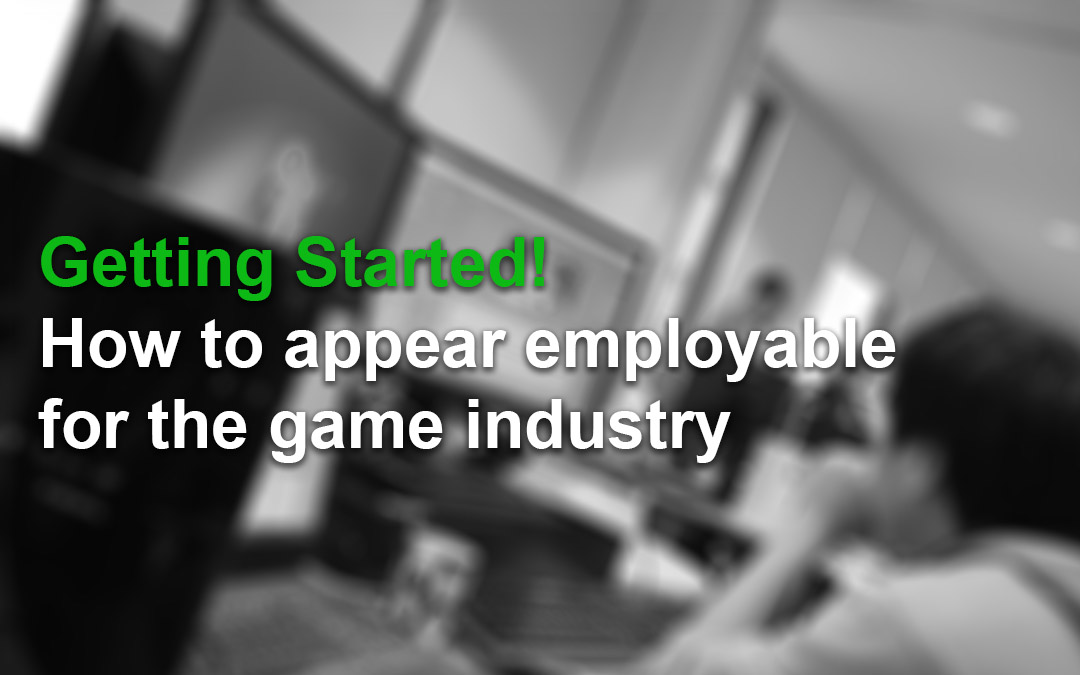 Deciding to start a career in video games can be daunting, and appearing employable doubly so. Knowing what to learn early on isn’t as simple as picking one route of education. After scratching the surface and understanding what certain games requires that one pathway of education will branch out into hundreds of other possibilities but you cannot learn everything at once. So the best approach would be making some decisions early on and setting up goals to complete on your journey to making it big in the industry.

The most direct road to take if you want the chance to be in a high paying game design job is to study hard then enter university, picking the most related subjects. This will involve primarily courses related to computer science and learning code such as C++. Standard universities will have options for this too, however there are specialized universities just for the game industry such as Full Sail University (Florida, USA) and places like SAE/Qantm in Australia. Some of these places will offer online courses, too, if you are not close to their campuses. This of course will cost money too—and quite a lot it in some cases. This route is also likely going to be the toughest, but at the end of the day, the goal with this is to become fully employable: you will fill the prerequisites required to enter larger and more renown game development companies.

Jack of All Trades?

Becoming a jack of all trades, so to speak, is a second option. Becoming proficient in multiple skills, whether in addition to programming or not, can allow you to approach the industry at other angles. If you have read the end credits of a higher budget game, you will notice the list of people who have worked on just specific parts can be extensive. As there are many different parts that make up games, from of course the code to asset work, sound, textures, story/writing, and other jobs that involve managing a group of staff or a project.

Online and Temporary work is a good way to get in work experience as well. This can also be mixed in with education and some people can even self teach certain skills especially using the internet as a resource. Sitting down and just starting on designing and developing your own game is also a common way to learn a little bit about everything: necessity is the mother of invention, after all.

Modding is yet another avenue that can make you look extremely employable, but it is somewhat a risk. The main risk is that you could spend years working on modifications—or a single mod for a game in some cases—only for no company to notice it. Not even the developers of the game you are modding. Your strongest asset in this situation is your fans, and that would be the players primarily. Sometimes, even you will garner fans who don’t even play the game you are working with but just follow your work out of interest.

Games media loves mods that garner growth, and having articles written about you is something you want. Like seen with mods such as Lost Alpha (S.T.A.L.K.E.R.) or The Dark Mod (Doom 3). In the process of creating mods you may or may not be skilled, but you will be learning as you go along and might even work with team members. This gives you an emulated experience of working on a development team even though it is somewhat more related to being a hobby.

Even though Lost Alpha was a non-paid venture by modders, they managed to work on it for over seven years. They even reworked some of the game engine to suit their own modifications.

The best course of action for entering the game industry for your career comes down to some careful planning. You must be open and able to learn new and different things; however there are many angles to approach from. From experience I can tell you understanding what to do as early on from secondary/high school is a strength. This will be the moment you start making choices that will impact your chances. This comes in the form of subjects you decide to learn in school but also things you want to become proficient at whether it is skills related to programming, art or sound work. If you are past this early stage then you need to find an angle into the industry that works, this will involve building connections and improving skills that you already know. Perseverance is key for becoming employable in this massive and constantly growing industry.