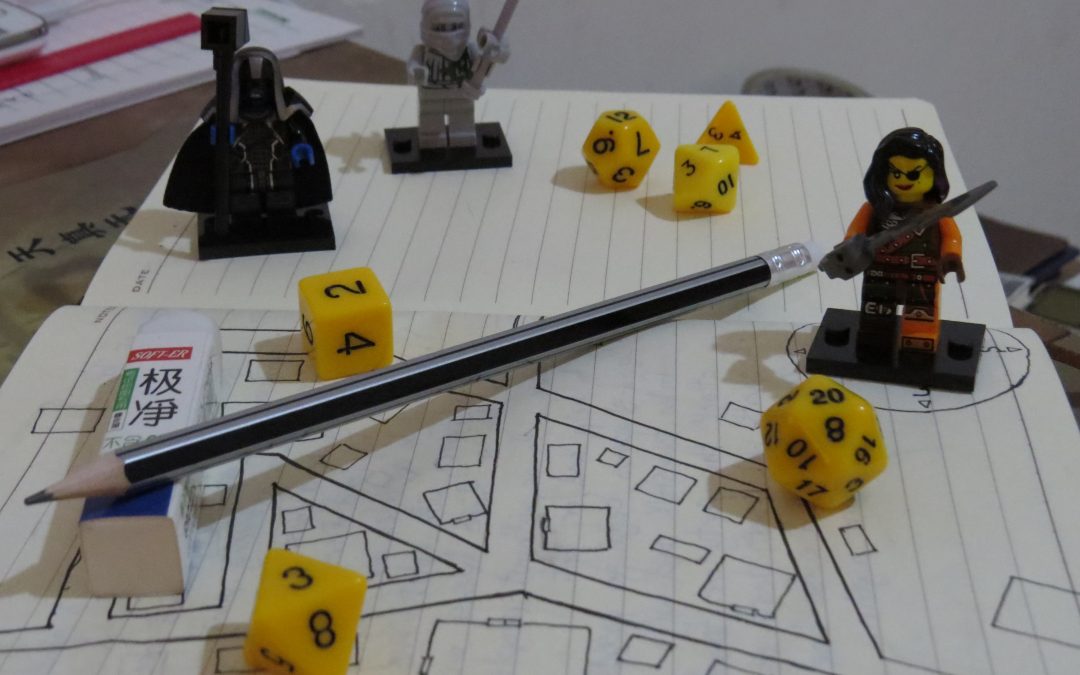 The setup: four people around a table comparing numbers on a sheet and the result of a dice roll. Sitting in front of them is the person pulling the smoke and mirrors around the players, showing them the Land of Oz. This group, together, tells a great story of heroes vanquishing great evils or solving a grant mystery that even Sherlock would be jealous of. This is Dungeons and Dragons (or D&D), a communal storytelling game where players play their individual characters in the setting and story line set by the Dungeon Master (or DM). For years now, D&D has been clawing back into the hearts of many and pop culture has recently been seeing a surge of D&D content. What people don’t realize is that D&D can be an amazing tool —personally, I see D&D as an amazing tool for teaching English in my Oral English classes. 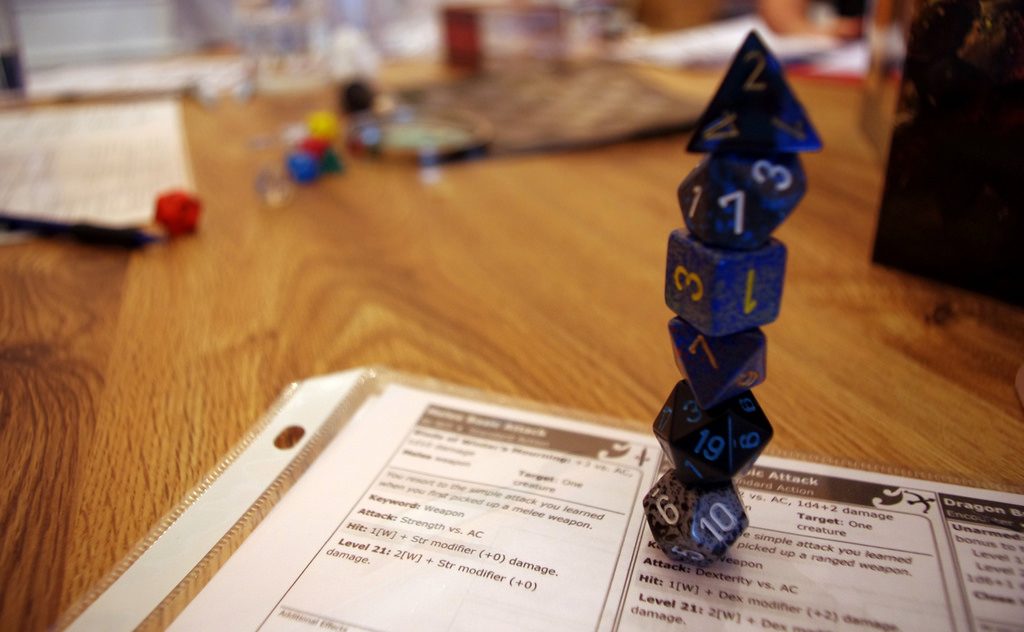 At Black Shell Media, we discuss how to be a better game developer and what we can learn from others, but something we should also look at from time to time is how our games can inspire, help, and hopefully provoke growth in our audiences. There are several creative benefits of playing D&D, but to get the whole package you should play as a Dungeon Master (DM) and a Player Character (PC). From the perspective of the PC, you work on critical thinking, conversational skills, and conflict resolution. Now, it is more demanding as a DM, but you will also gain insight on world building, narration, and storytelling. We often think about how games can help us relax, but maybe they should be used to help our society grow. D&D is a great example of how we can prepare our youth with games.

This creative outlet stimulates our critical thinking, conflict resolution, conversation, character development, and group dynamics as a player—the DM sets up the scenarios through world building and story-boarding. In a classroom, sometimes the discussions don’t go far enough: by developing a scenario and then having people make their choices, we can put the potential consequences on them in hopes for an eye-opening experience. As a budding DM, I recently built such a scenario into a game with friends who wanted to play for the first time. The scenario was as follows . . .

My players met a researcher who frantically strode into a town’s inn/tavern asking for help—a cliche plot hook for first-time players. His team of researchers had discovered a temple and wanted to explore it entirely but were blocked by some giant spiders. They agreed to help, and set out the next day with the researcher’s group. After reaching a broken section in the wall, the man asking for help said, “We learned the giant spiders attacking us have been coming from down there.” With much excitement, the group of players dove into the cavernous area. After defeating a nest of giant spiders, the players traversed the cave back to the broken temple. They pushed the doors to the last room of the temple open only to see the researchers now standing around some form of portal chanting and releasing some unknown evil into the world. 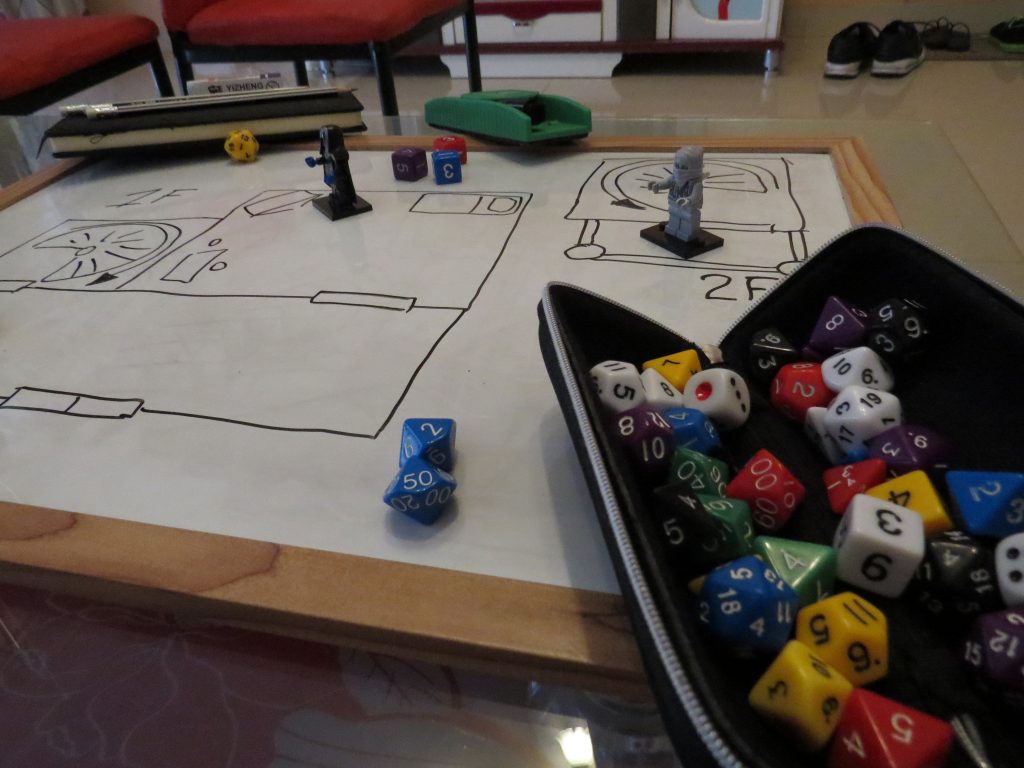 The hoard of Dice I have for players to use.

Had the players talked with the researcher and asked questions, they might have learned the reason for exploring the temple. Had the players requested the researchers join them in the fight against the spiders, it would have altered their plans for the portal. Players are always free to walk the world set out in front of them: all the DM does is follow through with consequences for the players. We ended that session with the players managing to close the portal, and upon leaving the temple, they could see the town now on fire and monsters running the streets—the consequences they now faced. This is one of several simple scenarios DMs will come up with for players. DMs strive for connecting their players emotionally to their actions by weaving their story threads through a major plot line or another character so that when major events happen they are fully invested.

What Are You Waiting For?

I cannot recommend finding a group online and putting yourself in the shoes of a player enough. There are several ways of getting a group going. <ost tabletop game shops have connections to local games, Facebook has several groups to join and ask questions or join in games, and Roll20.net and Tabletop Simulator on Steam are great virtual tabletop options worth exploring as well. D&D can be analyzed in many ways and from various angles, give it a shot and see what it is first hand; only then can people begin to see how to adapt it for other things than just playing for fun. Would you have stopped those researchers?