The two categories of gaming immersion, or How I Became a VR Fanboy in 10 Minutes 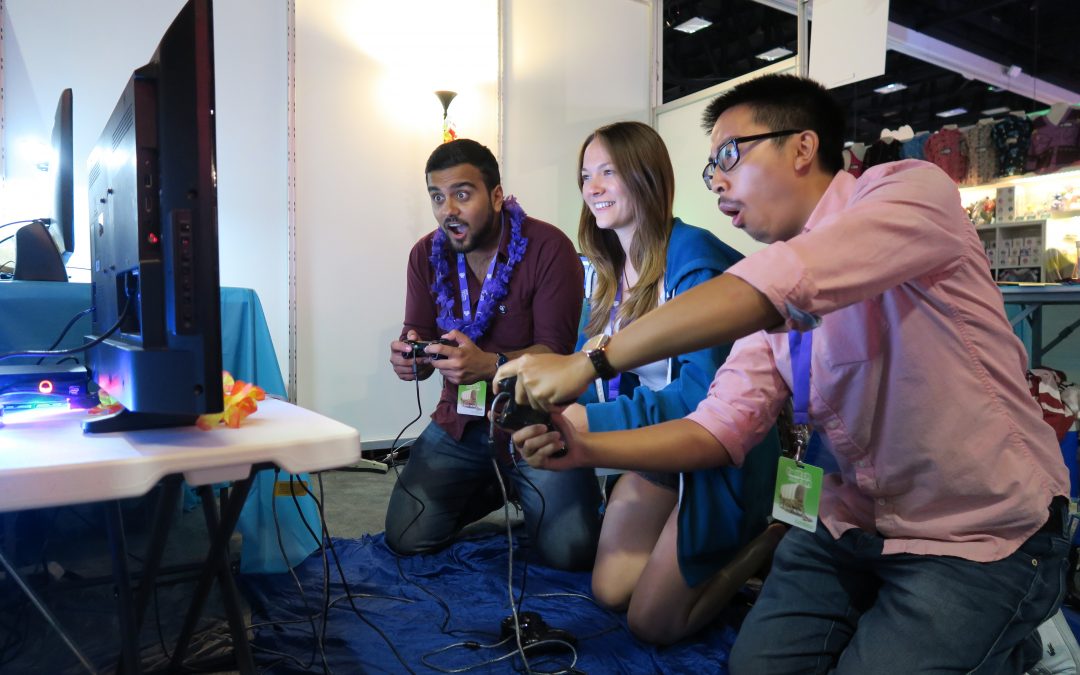 If you asked a thousand random gamers what they thought the biggest gaming buzzword of the last few years was, I bet you 999 of them would say virtual reality. The odd one out might be convinced that Pokémon Go was the be-all-end-all of gaming, but they’d be wrong. It’s VR.

PlayStation VR, Oculus Rift, Google Cardboard…It seems like everywhere you look these days, you see VR something or another. It wasn’t until my own mother called me and excitedly told me about the new Gear VR headset that came with her new phone that I realized, “Holy crap. VR is taking over.”

At TwitchCon a few weeks ago, I got to try out an HTC Vive with Longbow Tower Defense, a minigame in Valve’s collection of virtual reality concepts called The Lab. It’s an awesome little wave-based game where you look around and use your Vive controllers to fire a bow and arrow at angry little Viking men running up to your castle. (I’m assuming they’re Viking because they had vaguely Viking-esque helmets on. Is that racist of me? I need to brush up on my history…) The game has no depth, story or progression, but it is incredibly polished. Your hand holding the bow experiences vibrations just as it would if you were holding a real bow, and the sound design perfectly mirrors the atmosphere and bow sounds you’d hear if you were actually shooting invaders from a castle wall. I felt the weight of the bow in my hands after a few rounds. 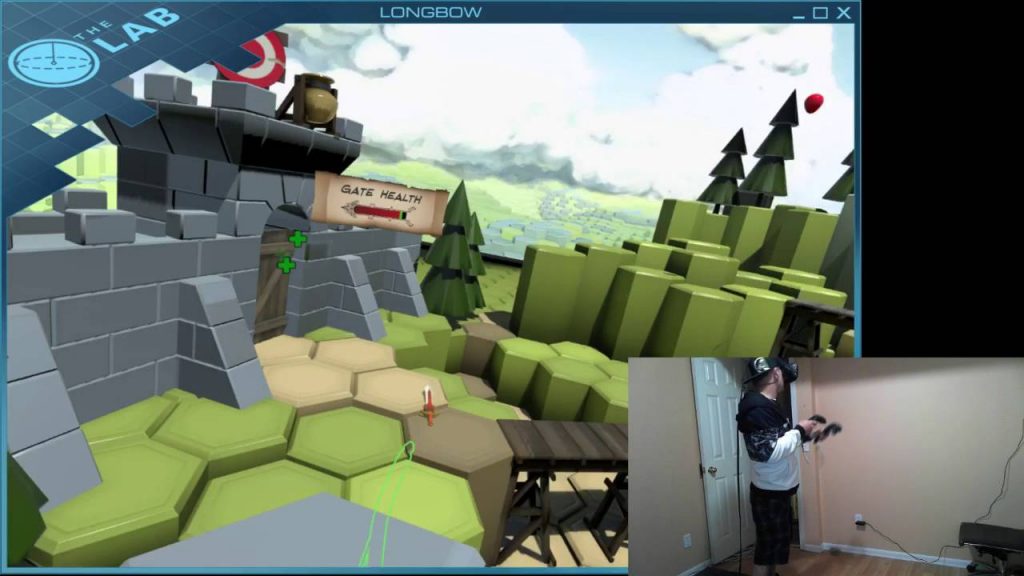 Before playing this demo at TwitchCon (which I did on a total whim by the way – it was a few hours before we had to wrap up our booth and I had been watching people try it out nonstop throughout the convention), I was not a VR fanboy. As a games industry professional I’ve certainly been trying to keep up with the news about new virtual reality advancements and games, and I’ve had my fair share of VR titles come to me asking for marketing support, but it never really struck me as something that could catch on and be enjoyable as a gaming experience. I was more into deep adventure titles (huge Zelda nerd) or addictive roguelike pick-up-and-slay experiences (shout out to Dungeon Souls!)

After 10 minutes shooting random dudes with the Vive, I can now say that I’m a total virtual reality fanboy.

I’ve been to my fair share of conventions and demo nights, but that there has never been an experience that made me want to keep going as much as this archery game. Sure, it was just sitting in one place and shooting repetitively, and sure my arms were super sore afterwards, but damn, it was really, really fun. I don’t know what exactly caused it to be such an eye-opening experience for me, but there’s something about completely immersing yourself in another environment that puts you 100% in the zone. 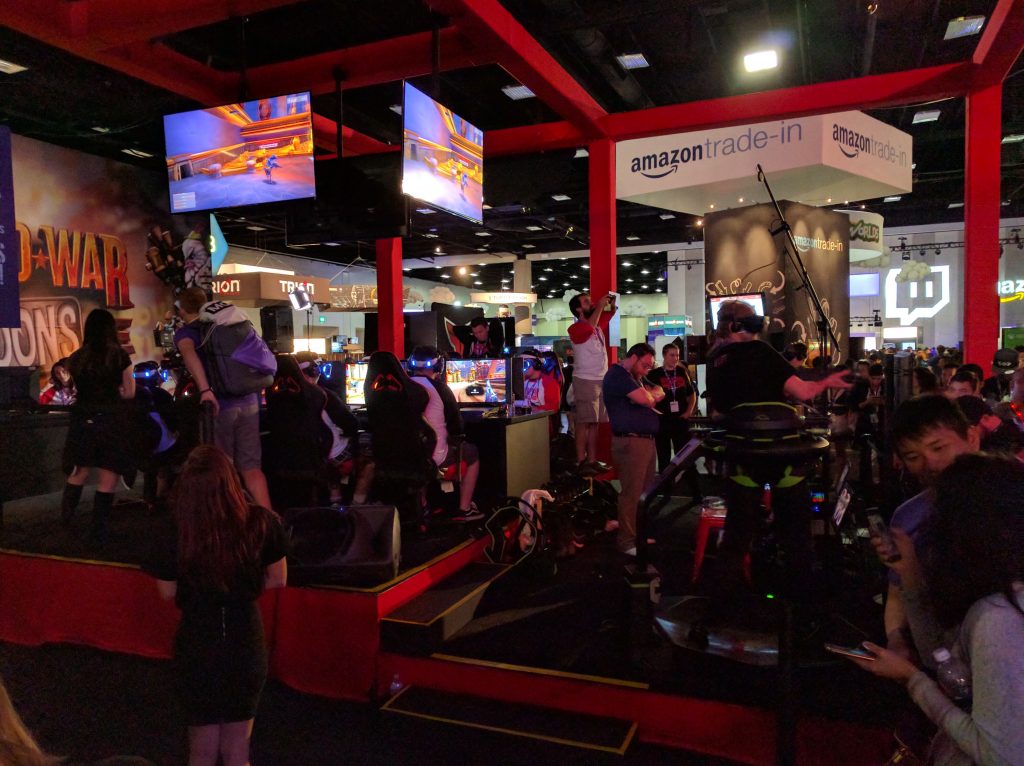 I feel like games of the past 20-30 years that have been hailed as having immersive visuals, storylines, characters and music are completely different when compared to how these new VR titles are immersing players. Games receive a lot of praise for helping people escape from what’s happening around them – you get to forget about the real world and live in a new in-game world where you can be whoever you want to be. Bioshock, Zelda, Fallout…all of these major franchises are definitely highly immersive experiences. But there’s always a little catch.

Games that are traditionally immersive, like the ones I named above, involve effort on the part of both the designer and the gamer. No matter how big your TV or how loud your headphones, while playing these games you’re still very aware of the world around you. It’s hard to focus 100% on the screen because unless you want to go blind you have to sit at a healthy viewing distance. No pair of headphones is ever 100% isolating. And the biggest thing: the 3D graphics of the game are still being rendered on a 2D plane. What I mean is that even if a game has 3D visuals, you’re still viewing them on the flat surface of a monitor or television screen. You don’t feel like you’re in the world unless you really force yourself to focus in and tune out the world around you. It requires a significant amount of effort and time on the part of the player if they really want to escape their world and enter another. Having to suspend disbelief can be a challenge for new gamers especially.

Games that are VR immersive, however, have a huge advantage. Their 3D renders are actually 3D in the same space as your body is 3D. When you put on the VR headset, you’re seeing objects, settings and people with a level of depth impossible to achieve on a flat TV screen. When something floats by you, you can turn your head and watch its every angle. If enemies are behind you, you have to physically rotate yourself to reach them. You can observe, interact and fight in a world that appears to you in the same way the real world does. I’m not a psychologist or anything so I have no clue what the scientific term for what I’m talking about is. But I am a gamer, and I can tell you that being inside that VR world, even with cartoon-y graphics and flat characters running at my castle, I truly forgot that I was at TwitchCon. I didn’t have to try to immerse myself in the experience. In fact, I had little choice but to be immersed. 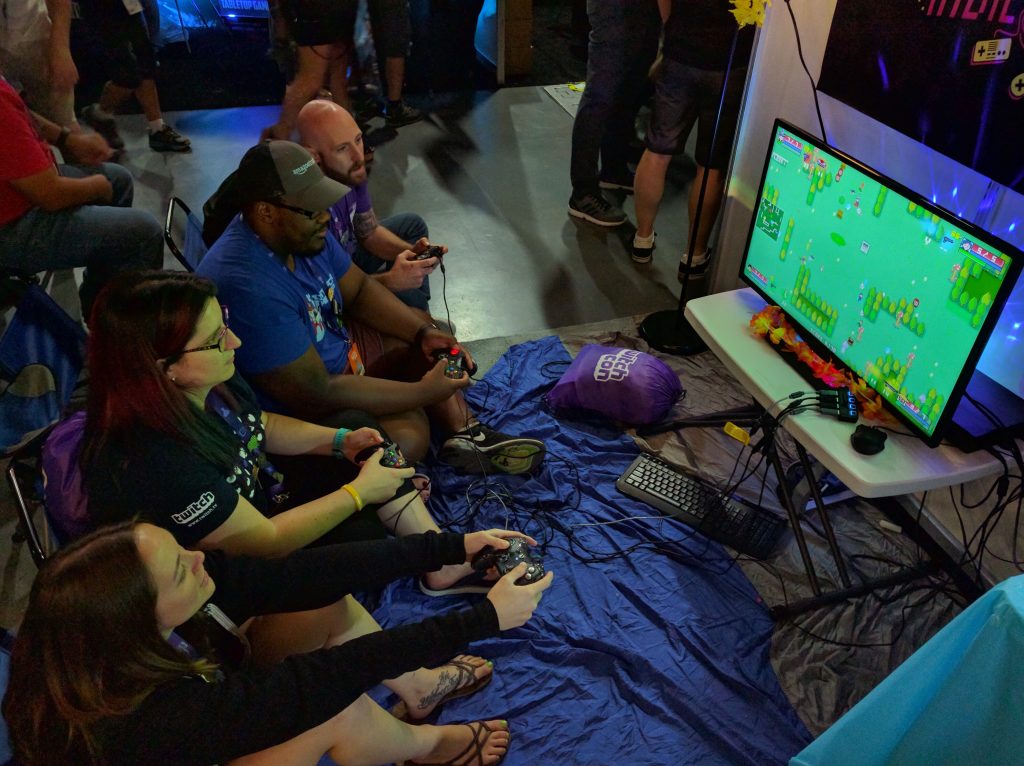 Whenever I get tired playing a traditionally immersive game, I know that I can just pause the game and step away for a bit to refresh myself. When I was playing Longbow Tower Defense and I got tired, I wasn’t thinking, “Oh man, I should probably pause the game (or ask the guy hosting the demo how to pause it).” I was thinking, “Oh man, these attackers are going to get through. I better try shooting some more.” I genuinely could not bring myself to break the immersion and step out of the game world. I was acutely focused on who was in my field of view, who was creeping up on the edges of the castle and where the traps I could set off were. When I was finally defeated (those damn little Vikings, or whatever they were) and had to take off the headset, I genuinely felt disoriented and had to take a second to readjust to being back on the loud, crowded exhibition hall floor.

I want a Vive so badly. I want to be able to dive into new worlds and feel like I’m not just sitting at my desk or lying on my sofa mashing a controller’s buttons. I want to really experience the thrill of landing a long shot with my trusty bow and arrow while I proudly defend my castle. I want to put the headset on my friends and family and watch them ogle the sights around them as though they were on another planet. I want people who feel trapped or stressed to be able to escape their problems, even if just for 10 minutes, through the power of VR immersion.

To HTC, Sony, Valve and all the other great companies doing great work with great aspirations: I salute you. I think great things are going to come of this, and I can’t wait to be a part of the VR movement.