Many times, I find myself unimpressed by a game’s faulty plot. I end up feeling disconnected, uninterested, and generally disappointed when I complete a video game. However, I do find solace in knowing there is hope for a game lacking in plot.

My hope is found in characters such as the Joker from Arkham Asylum, Nashandra from Dark Souls II, or Ganondorf from Zelda. There are many more names I could list, however, I think you’re starting to get the picture, A well-developed, interesting, villain can make all the difference when it comes to developing the story of your game.

You Can Never Be Too Emotional

A villain can consist of all sorts of emotions, even if they are conflicting. They can be deranged while still remaining passionate, providing a more attractive personality for the villain at hand. Using our previous example of the Joker, he is one of the most well-developed villains of all time: he’s maniacal, cunning, and determined. You might ask why he’s considered an “ultimate villain,” provided his back story isn’t exactly War & Peace. The Joker provides such a crazed performance that his sparse backstory only intrigues a player more. I suppose we’ll have to trust Alfred when he says, “Some people just want to watch the world burn.”

Well-developed villains do not need to be deranged or crazy for that matter. Frankly, they come in all emotional shapes and sizes. Whether your villain is downright crazy, a renegade military operative, or a corporation bent on world domination; your villain simply needs to be attractive and enticing to the player. Providing unique mannerisms to your villain helps to interest players as well. Singling out your villain makes them feel even more unique. 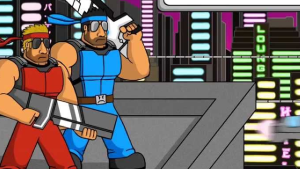 Last but certainly not least is this idea of shock and awe. No player wants to feel as if there is nothing left to discover. The minute gameplay seems to become too routine – BOOM! – hit them with a left hook! Villains are meant to bend the rules and break the balance between good and evil. Take Bioshock for example, and, if you’ve been living under a rock, spoilers ahead.

Containing probably the most beautiful story twist in recent game history, Bioshock truly changes the way a player feels midway through the game when Atlas turns out to be manipulating you the whole time. This turn events was essential to the development of this character, “Would you kindly” agree? Atlas himself was suave, crazed, and  shocked players. He perfectly accentuated the story, allowing players to truly feel over-indulged in the Bioshock universe of Rapture.

There is an important guideline when developing a “shock and awe” performance for your villain. Please remember to stay within the bounds of your game’s universe. The best way to describe what I mean would be through an example, in this case, Uncharted: Drakes Fortune. Before you punch your computer screen and start hating me for bringing up this game as a bad example, I have two words: Nazi Zombies. Even for a game with a slightly wacky Indiana Jones vibe going on, it felt inconsistent with the rest of the world. Uncharted features beautiful graphics, impeccable gameplay and a beautiful plot, well, until the end.

Just remember when writing a game, don’t give your villain the short end of the stick. They may very well become the most defining factor of your game when it comes to motivating a player to finish. Perhaps with a strong enough characterization, they will leave a lasting impression on your audience for years to come.

Often labeled as The Forces of Darkness or The Empire, The Big Bad is the epitome of evil, the no-questions-asked bad guy/army/organization that must be stopped at all costs. These are the raid bosses, the invaders from another planet, whose only goal is to plant their flags on top of our corpses.

The Big Bad, whether they’re kidnapping princess, conquering kingdoms/planets/galaxies, or straight up murdering people as easily as I polish off a pint of ice cream on a Friday night, they all do one thing incredibly well: They motivate the hero to get off his ass and save the day; and when the day is saved, peace is restored. This is all well and good, but such fairy tale endings rarely happen in real life. Defeating the Big Bad requires a stretch in the suspension of disbelief, first that an entity that immoral can exist, and second that things return to their rightful order once that entity is no more. Victory almost feels hollow because we as players have done it so many times before.

The Human Element: The Struggle Is Real

So then what’s the big to-do about a relatable villain? Why should any player want to empathize with the antagonist? For starters, the antagonist/villain is the reason the player gets to go on their adventure in the first place. I think we owe it as game developers to create the best dang reason for adventuring possible, and an extremely effective way to do that is to make the villain relatable and human. Arguably, the human condition is about struggle. The hero struggles against all odds in the name of their cause, but just as well, the villain should do so.

Instead of pitting black against white, we can instead write a story about two shades of gray, even if one is darker than the other. When we look at Big Bads, they tend toward the tippy top of Maslowe’s Hierarchy of Needs; they want the ultimate in self-esteem boosts: Supreme Rule of Everything. But what happens if the villain, instead, has the goal of food, a safe place to call home, or maybe even someone to love (not to be confused the the grief-stricken villain who’s lost a loved one and subsequently has gone insane).

When your villain’s goals don’t involve creating internment camps for kittens and forcing them to kick puppies, there is a wonderful opportunity for doubt. Instead of taking the hero’s quest for granted, the characters and players must wrestle with complex themes, emotions, and motivations. The player struggles moralistically as both the hero and villain struggle physically through the story.

For example, maybe the Evil Technological Empire isn’t exactly evil. Maybe the Empire consists of people who have spent their entire lives being discriminated against and looked down on by the magic users of the world. With the power of steam and gunpowder, they desire to reshape the world into a place where mage and muggle are equal. Maybe the main antagonist is someone who lost their family to persecution by mages and is just trying to create a world where other non-magic families don’t have to suffer like theirs did. Kind of puts the firebombing of the hero’s village and destruction of their sacred crystal into perspective now, doesn’t it? I think it’s worth noting that we often see the relatable villain crop up as a high-ranking underling to the Big Bad. Perhaps they were loyal to the former leader or perhaps they follow their own ethical code, but regardless, they become doubtful of the Big Bad’s methods at some point and often meet with an untimely death because of it.

Everything Has Its Price

I will caution that creating a relatable villain does not come without its own set of risks. The writing becomes exponentially more important, the pitfalls more dire. Sometimes, it is safer to write simple characters. But if you have faith in the writer(s) on your team, then I encourage you to let them have at it. Create a story with rich and complex characters that stay in the players’ heads long after they’ve exited from the main menu.

Please be sure to share this article if you enjoyed the read! H/T to Joseph Stotz and Dorian Karahalios for writing all of the content in this post!