Cutting Through the Static: The Immersive Greatness of Oxenfree’s Radio 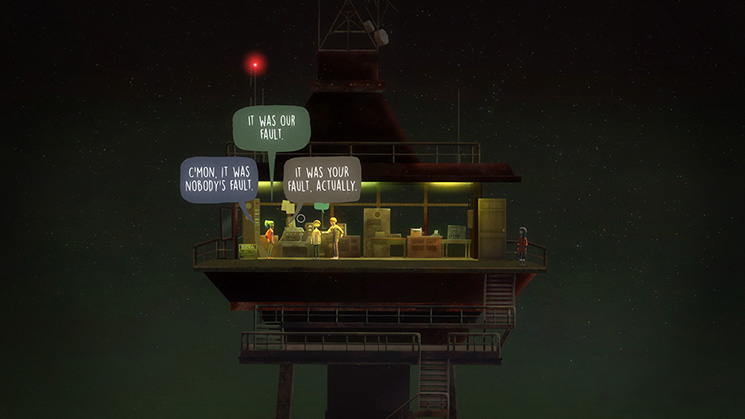 This morning, I had a difficult decision to make: Do I want to complete Oxenfree or not? Do I want to see it through to the end and spend another night tossing and turning in bed, or do I want to drop it while I have the chance to not lose another night of sleep?

Ultimately, I made the decision to complete the game.

Oxenfree is a mix of an adventure game and horror game. It has interesting, complex characters, a very flexible conversation system, an appropriately moody soundtrack, and—its best feature—a very realistic simulation of an old radio. I say horror because Oxenfree is a rather frightening game, which surprised me because there are no jump scares, no enemies that can hurt you, and nothing in the game that looks visually “realistic” enough to have any sort of scary impact the way The Evil Within or Amnesia would.

Instead, Oxenfree relies entirely upon the quality of its writing and sound to creep you out, and it does so in a way that sticks with you—where you’re lying in bed late at night and you begin to hear the sound cues from the game that are designed to tell you something bad is about to happen. It’s one of the few games I know that’s really good at leaving a lingering sense of dread in the player, rather than simply providing them with a “temporary scare” that wears off after they’ve closed the game and walked away.

A lot of this comes down to aforementioned the radio your character in the game carries. Oxenfree gives you an old analog radio that mechanically functions almost exactly like a real-life radio. You can use this radio to open wormholes to a supernatural dimension, hear the voices of the dead, and even influence time. Oh, and you can use it like a regular radio, too, by tuning in to old radio stations to listen to.

Cutting Through the Static

The radio’s controls are one of the reasons it’s Oxenfree’s best mechanic. First, you bring the radio tuner up with the R button. Then, you use the right analog stick to move the needle between different frequencies. Each time you’re close to the precise frequency of an actual radio station, you begin to hear distorted audio amidst the static, which tells you that you’re in the right range. As you get closer to the precise frequency of the station the audio becomes clearer and clearer, until you can make out what the programme is saying.

On the Nintendo Switch—which is where I played Oxenfree—the radio feels even better than on other platforms. For the Switch port, the developers made the effort to implement HD Rumble across the game. When using the radio on the Switch, the controller produces a neat “click-click-click” sensation as you move from one frequency to the next.

It lends the radio a very physical, tactile feel, which makes it a lot of fun to use. Since the radio is also responsible for some of Oxenfree’s most frightening moments, it effectively means the game is  tricking you into creeping yourself out by encouraging you to use it.

In a Q&A on the developers’ blog, lead programmer Bryant Cannon explains how he got the radio to feel as authentic as it does. Here’s an excerpt:

Q: Was it important to get a visceral feel? It seems like tuning the radio is less of an abstraction from real life and more of simulation?

A: The aural and visual feedback is essential to making the player feel the change in frequency, and that feel, in turn, helps guide them to the right place on the dial. We definitely started from the idea of simulating a real radio as closely as possible. We then tweaked and abstracted a few things, and added new kinds of feedback so the player knows that the game recognizes their movements. For instance, when the player is in the vicinity of an important station, the radio UI will faintly glow. As the player tunes to the station, the UI gets brighter and a faint sine wave clip gets higher and higher in pitch until it’s inaudible.

Meanwhile, composer Andrew Rohrmann, who was in charge of the music for the game, says he purchased an old World War II radio himself and used 200 feet of copper wire leading up to his roof to get it set up, in order to understand how older radios sounded. This research on the part of the development team goes a long way toward replicating the sensation of using a real-life radio in the game. You could be on the “outskirts” of a radio station, in between two stations (where you hear audio/static from both), and even have instances of the radio “reacting” to things in the environment.

Once you’ve gotten the hang of using Oxenfree’s radio, you basically want to use it everywhere you can. I was tuning in to old radio stations that would tell me about the island my character was on or share bits of real-world war history that would let me piece together the story. During high-tension moments, I would be required to use the radio to “make something happen,” often in inexplicable and frightening ways that involved dead or possessed people talking to me.

The radio is Oxenfree’s version of the flickering lightbulb in horror movies. It’s a piece of old technology, easily influenced by the supernatural and often an omen of bad things to come. It’s one of the most interesting game mechanics I’ve had the pleasure of engaging with this year, and I would recommend anyone involved with game development (or simply in the mood for a very creepy game) check it out.