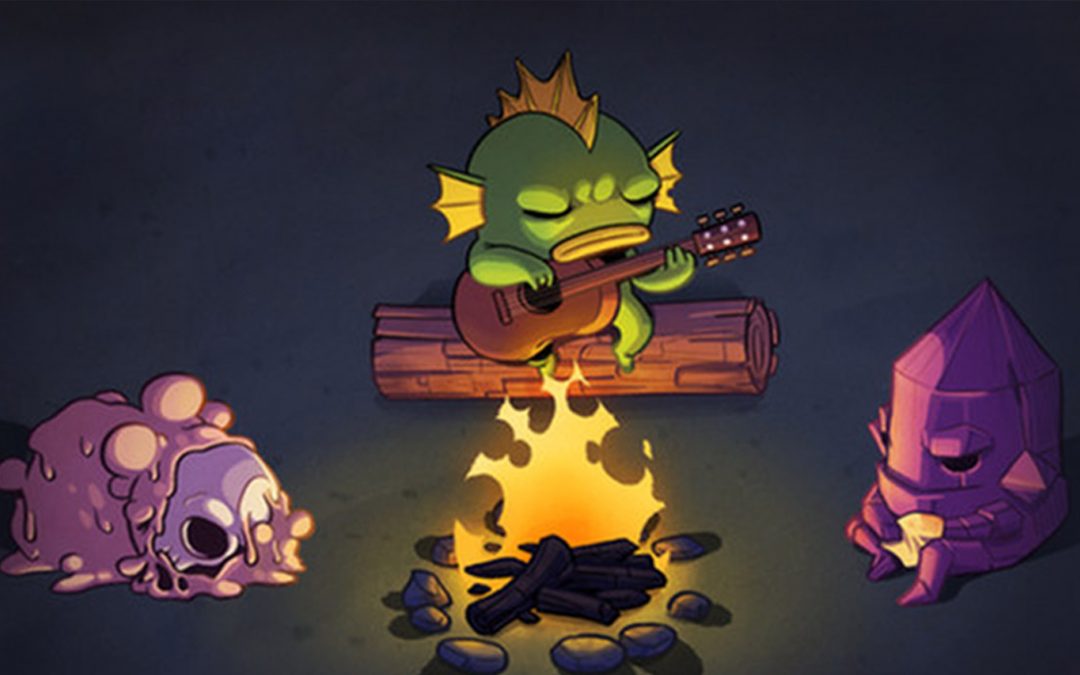 Nuclear Throne is a top-down roguelike shooter that does many things right for the genre. It is an extremely challenging game that sports a depth that may surprise some. I like to normally compare Nuclear Throne to another game, Spelunky. I feel it is very similar in many ways, except for the platforming aspect of gameplay. Both of these games have very similar roguelike elements and are games that are amazing for indie developers to learn from.

The game is set after the time of humans, brought on by a cataclysmic event. What remains are mutations. You play as these mutated beings who need to survive the dangers that exist in the world after “the apocalypse.” Your main goal is to reach the Nuclear Throne, known only by legend.

Procedural Generation is essentially a staple of roguelike design. It allows for many other elements to come together to form the fun factor and feel for the gameplay in this genre. This mechanic is used primarily within Nuclear Throne for level generation. Elements use various themes and look similar, but no two layouts are the same. This works into enemy patrols and spawns along with how and what you will encounter within each area. This is very similar to Spelunky as well: assets are reused and themes are applied but nothing layout-wise is ever the same. It will never fail to keep things fresh when it comes to level design. 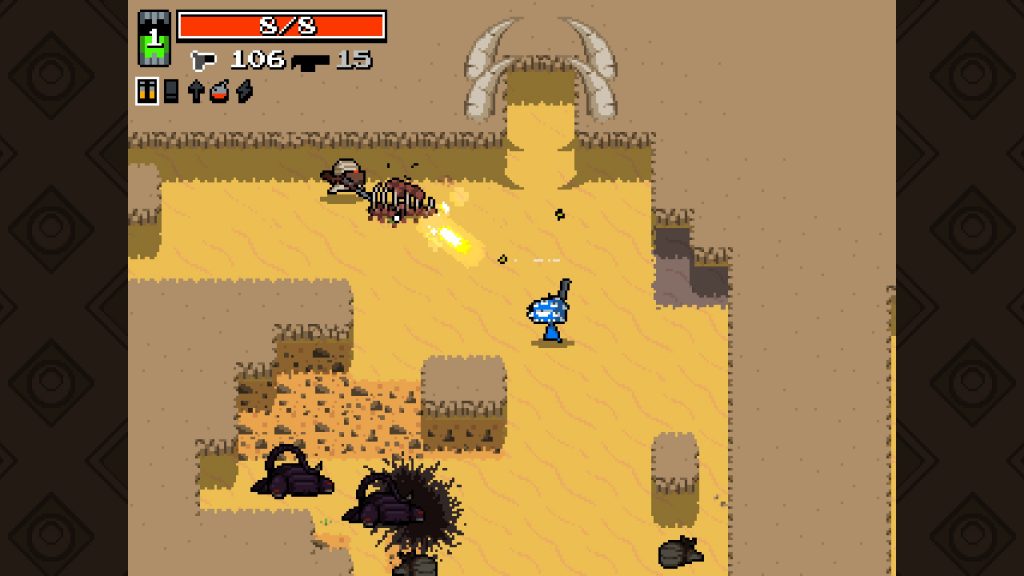 Each level layout will change, each change defined by a random seed. Daily and Weekly seeds are generated for all users who own the game, so people can play those same levels from time to time.

A Generous Selection of Misfits

Nuclear Throne uses multiple characters, some of which you need to unlock over time, and each possess multiple abilities. Each character requires the player to adjust their play-style as various elements are changed which can make the game much more challenging but end in greater reward. There are twelve different characters in total with two unlocked at the beginning. Every character has different abilities that you can use with your right mouse button. For example, “Crystal” can shield himself for a short period, deflecting some shots back at the enemy. 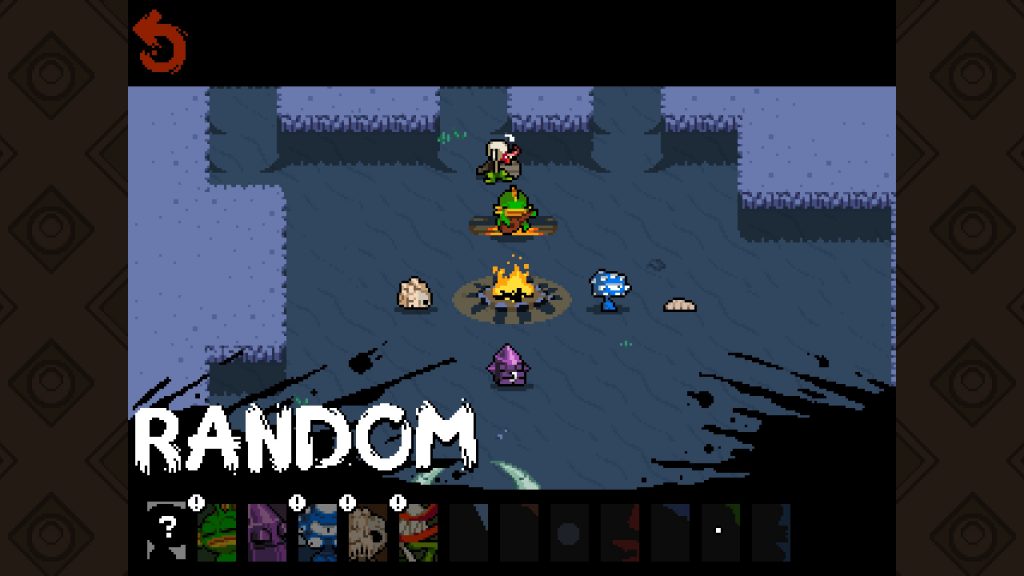 You will end up getting to experience every character very fast. Quick to learn, hard to master.

The gameplay in Nuclear Throne has an element of spontaneity. As soon as you start the game, there is a tutorial that lasts for a minute or two and as soon as that is over, you are shoved straight into the action. With the randomized levels, enemy patterns and situations the player needs to adapt quick to survive.

This does make difficulty balancing a major challenge and likely the best way around this is to flatten out the difficulty curve: zvoid having the game progress through easy, normal, and hard from start to finish. Instead, the game makes the levels by borrowing from both sides of the spectrum (easy and hard elements). This way, you are thrown a lot of content as the player, but it will require you to go through the game many times to get a ranged experience.

Coming Back for More

As with all roguelike games, replayability is important. Within Nuclear Throne there are a few factors that help this become a reality. Dying within the game is not the end: once you die, you will want to go back and try to improve on your performance. Using new characters and new abilities will entice the player to further progress and play the game. Being able to get into the game quickly is important and having an appealing visual style also helps add to this.

On the Fly Strategizing

To add to the aforementioned spontaneity, Nuclear Throne has various sets of abilities that are unlocked while playing. Each affect how you play in many ways. This can be by making the game more or less challenging or by adding short boosts to extend each run of the game. There is a lack of long term strategy involved with this feature however as each time you are prompted with these unlocks to choose from they are randomized and will require an on the spot choice. Playing through the game multiple times will give the player a better idea of what each option does and will help with understanding which option is more beneficial as each run progresses. For me, I find that these options are not as varied as I like but they are different enough they do keep the game fresh for a decent amount of time. 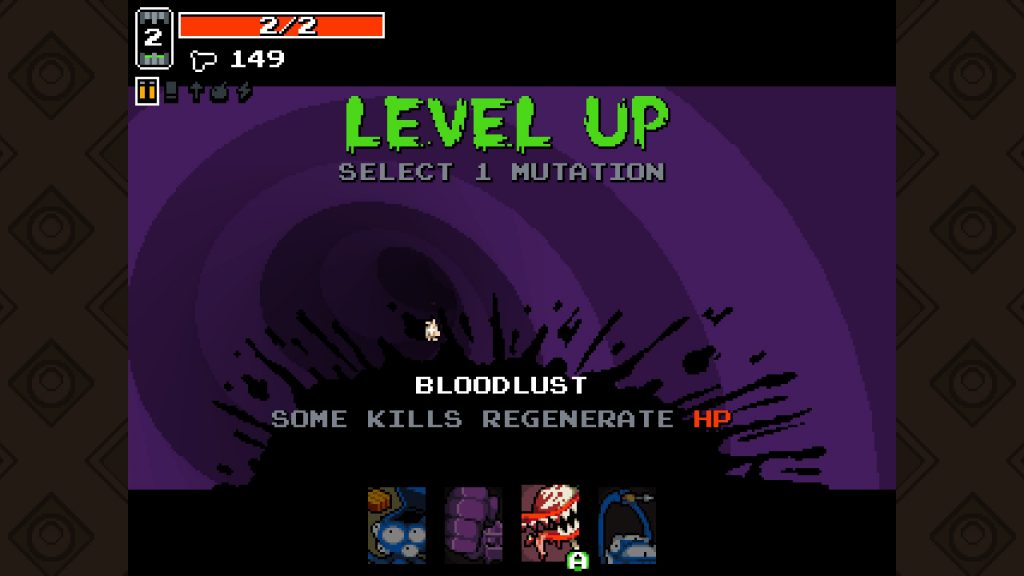 Permadeath is becoming a gimmick in some games, but in Nuclear Throne, it’s there by design. Once a player has a handle of the game’s mechanics they will be able to tackle many situations. Even if the game generates a near-impossible situation through a procedural nature the player should have the ability to navigate that obstacle with skill alone. The design in Nuclear Throne allows for this.

Personally, I think permadeath options for game mechanics or difficulty settings are something that are welcome as long as they are implemented correctly. Sometimes, developers add in this as a difficulty setting, as seen for some recent first person shooters like Wolfenstein: The New Order and Call of Duty: Infinite Warfare as end game unlocks.

Permadeath in and of itself is somewhat like a lesson from the game. Every time you die in game, you die without the ability to just load into the same area with the same progress. Due to the design in Nuclear Throne however, all you are losing are things you can quickly regain, at most you lose an hours progress, and you are better for it. You are taught through hardship to adapt faster to the gameplay and the difficulty that it provides. 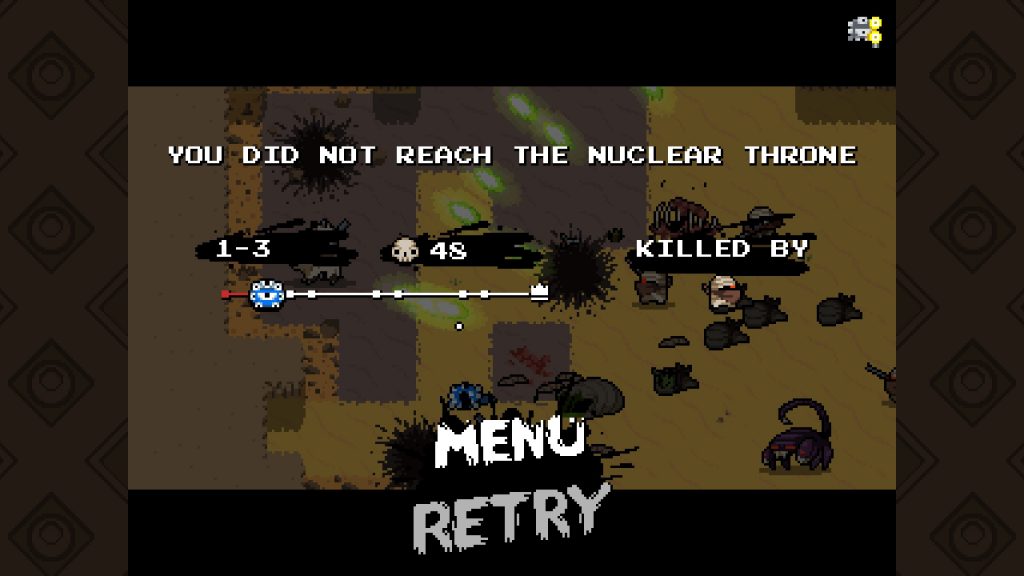 The status screen will give you an idea of how you did on each death before you go back to the start… or rage quit.

These roguelike games at their core aim for fun. There is rarely a hefty convoluted narrative to get through full of lengthy dialogue, so you get into the action right away. There is no exception here with Nuclear Throne—aside from some nitpicks, it does a lot that other developers can learn from.