The Lusty Argonian Maid & Other Tales: A Cheatsheet to In-Game Lit 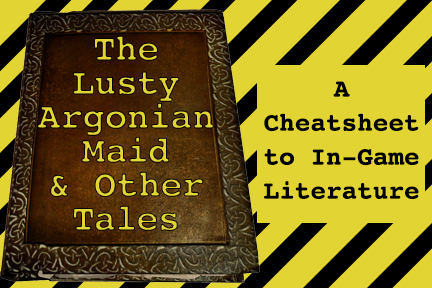 So, you’re well on your way in the development process. You’ve got a really solid core gameplay loop, the controls are tight and fun, the music is bouncin’, and your main storyline is doing pretty well. But there’s something else you want to add to your game. You remember the audio logs from Bioshock, “A Thousand Years of Dreams” from Lost Odyssey, or (and maybe the reason the title grabbed your interest) “The Lusty Argonian Maid” from the Elder Scrolls series; and you realize that you want something like this in your game too. You want in-game literature to further build out your game’s world, but you’re maybe not the best writer—just the best one on the development team. Here’s where this cheatsheet comes in handy!

To start off, I want to say that the reason we can get away with a cheatsheet in in-game literature and not in, say, meatspace literature, is what I want to call the Main Conceit of it all. The player begins by being one degree removed from reality: they are in the real world playing a game through a character in a make-believe world. In-game literature exists as another degree of separation from reality. You know and the player knows that the literature found in-game is not something that would really exist in the real world, but that’s the Main Conceit, a major suspension of disbelief that the player and developer are both in on. In other words, the player will go along with whatever mood you want to set in your in-game literature—if you can pull it off.

This cheatsheet exists as a way to create a strong outline to base your in-game literature on—essentially a good way to get you into a good writing mood to churn out worldbuilding lore. The three main components to this cheatsheet are Intention, Author, and Genre, just three simple dials you’ll fuss with before you begin writing. But the devil is in the details. Let’s get into them!

Intention is simply the goal or goals of the piece of in-game literature. Is this audio log meant to be plot-informative or is it just meant to merely set the mood? Maybe both? Or perhaps the audio log is intended for humor. The first step to visualizing the writing is to determine what you want the player to take away from the piece, be it emotion, information, mystery, intrigue, whatever.

Normal authors exist outside of their works. They eat and breathe and read fan letters and death threats. Normal authors tend to have Wikipedia pages about them. But for in-game literature, the author exists only within their writing or related materials (though it could be your choice to have NPC authors in your world). Regardless, you have a small amount of space to convey the personality and flavor of the author; but because of the Main Conceit, you can be a little bit on the nose with your characterization. Some quick descriptors for your author—witty, pious, perverted, honorable, old, young, etc.—should help inform the voice of the writing. You should also consider the state of mind of the author. This is especially important in journal entries and audio logs, as these pieces of in-game literature often function on an emotional level.

Genre is the form this in-game literature takes. Poems, journal entries, short stories, audio logs—all of these are genres that have different strengths and weaknesses. Below, I’ve written a few notes on some of the common genres to help you better focus your writing.

The Poem: Often acting as a historical text (e.g.: writings carved onto old ruins), the poem has a dual function of exposition and emotion. Hone in on your target emotion, dial it up to eleven, and if you’re feeling ambitious, make it rhyme. When attempting to write in a certain poetic form, do your research and use the most blatant qualities of that form.

The Story: These often act as world-building filler, so the enjoyability of the piece comes first. For this reason, you want to be as cliche and tropish as possible. Novelty is also a crucial component, and this can really shine in how you choose to portray the author. Maybe the author is a particularly bad romance writer who gets sidetracked by the alchemical components of their scenery: not everyone loves romance, but most will find enjoyment on this lampooning of a romance novel. A certain element of the absurd is required, as the player is controlling an avatar in a non-existent world reading literature by non-existent authors.

The Diary: The scrawlings of a man slowly driven insane, the scouting report of a weary soldier, the diary entry of a lusty and bored daughter of nobility. Journal/diary entries are often unfiltered emotional outpourings by the author and focus intensely on narrative voice. And when those entries focus on information, they often fall into the category of the Log (see below). But for the Diary, if most in-game literature is worldbuilding filler, the Diary is worldbuilding color. This is where you breathe life into the setting you’ve created. So channel your inner madman/soldier/lusty noblewoman and write with feeling and passion!

The Log: AAA games have trended toward audio logs, as it frees the player up to continue exploring while the log plays in the background. Since audio literature is a completely different beast, we’ll focus on written logs. This can include journal entries, science logs, ships’ manifests, etc.. For these, exposition is often the most important element: the journal entry is telling the player where an NPC ran off to, a science log is giving hints on how to beat the upcoming mutant boss, or a ship’s manifest is cluing the player into what kind of environment they’re in. The author’s personality is optional, but it can be used to great effect. 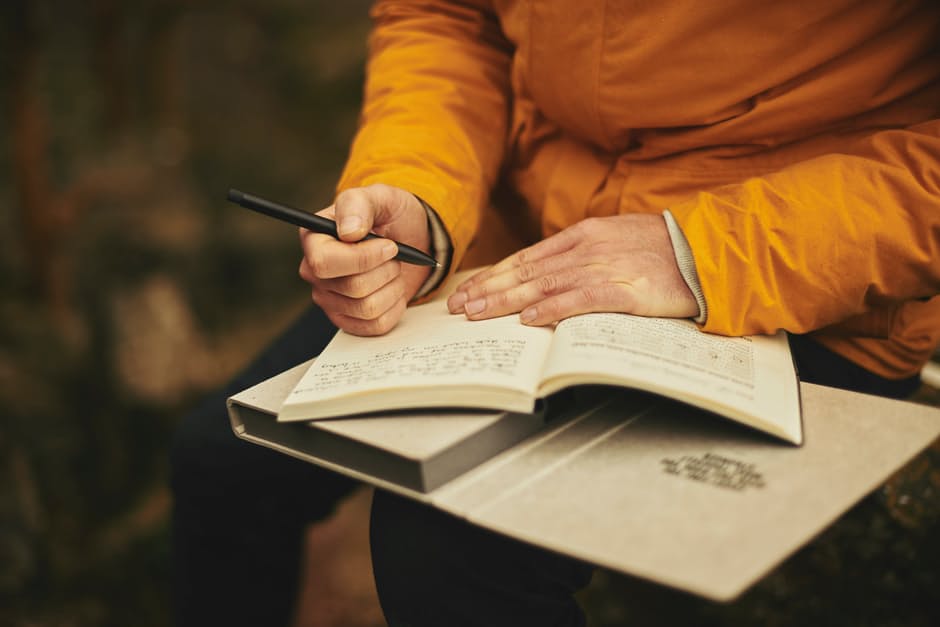 Let’s run through an example, where I’ll create the cheatsheet then generate some writing from it. For starters, let’s pretend that I’m writing a journal entry found in a cave in a fantasy setting, and I want to convey a sense of impending doom/dread for the boss further in, but I also want to keep things from getting too serious.

I know I said you’d be gettin’ grandbabies soon. I was real close to proposin’ to Katarina. Was gonna do it after I made it rich off this nobleman we lured to this cave. ‘Cept . . . was no nobleman, Ma. Kat had him tied up and was leading him deeper into the caves—gosh you shoulda seen her, so beautiful and powerful the way she pushed him along, running him into the walls and whatnot. Swore I’d only fall for a woman who could beat me worse than you ever did. But . . . but that’s all changed. The nobleman, Ma, he was a monster in disguise. We had his hands tied but he started sproutin’ these tentacle things like you’d seen on the octopuses at the fishmonger. ‘Cept these were bigger and sharp. They tore up Kat like paper, Ma, then the monster ran deep into the cave. Kat ain’t gonna be giving you grandbabies on account of her being in several hundred pieces.

As you write, make sure to keep looking back to your cheatsheet to keep your writing on track. Don’t worry about subtlety and don’t worry about writing poorly. Just write! Once you’ve got something down, you can revise it as much as you want, looking to the cheatsheet again to hone in the tone of your in-game literature.