How Does a Developer Make an Addictive Isometric Action RPG? 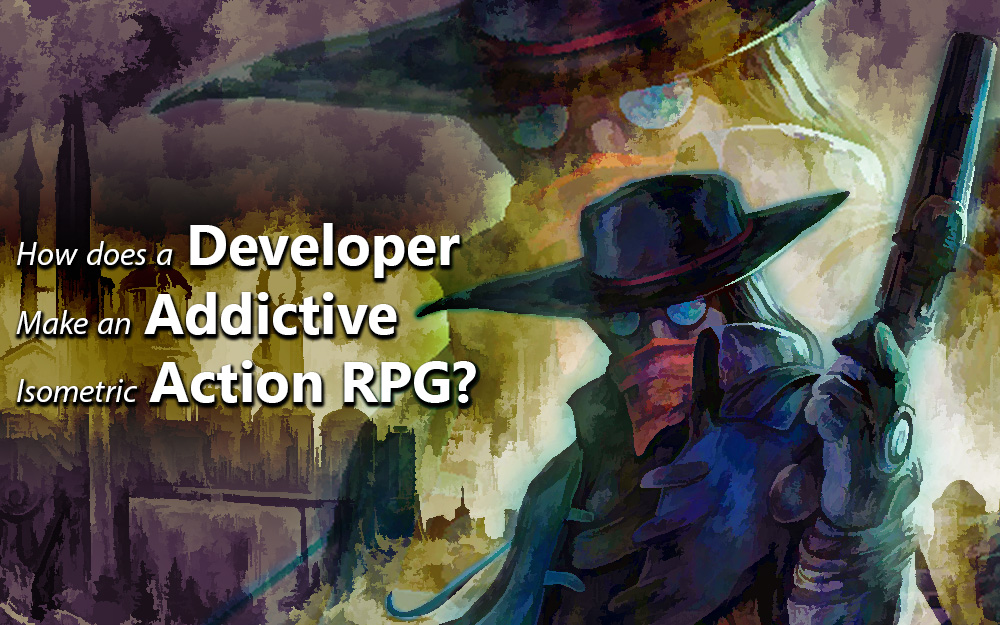 Different genres of video games can be addicting to specific target audiences. Each genre is bound by certain parameters or functions that explain why a particular game can be addicting. I’d like to look closer as to why, in particular, Isometric Action RPGs can be extremely addicting to fans of RPG games as a whole. From the early days of Diablo to more recent times, with free to play games like Path of Exile and indie titles like Victor Vran. Role playing games like these have various elements that can instantly grab a player’s attention and hook them with it’s gameplay or lore.

It is challenging to implement certain features in these types of games, as many adhere to a strict set of functions that are common with the sub-genre. These include a fixed camera angle, real time combat that is bound by player and weapon stats (and sometimes RNG/dice roll variables). Gameplay can be bind-heavy, requiring a mouse and keyboard to allow everything to play fluidly. Even though iso-aRPGs can be configured with a controller in mind, a lot of the freedom and input range needs to be sacrificed.

Each of these games have a standard set of features. Various mechanics that are seen in all RPG games like:

Something interesting I’d like to add on the topic of in-game currency. In Path of Exile, instead of gaining gold, you gain scroll fragments. These are used as a currency to buy items from NPCs. They also can be stacked and turned into Scrolls of Wisdom, which are used to identify unknown items & features. Amongst the scroll fragments, there are other currency items that are used to upgrade weapons or armor but scroll fragments closely resemble what most other games would count as gold, gold pieces or coins. This is an example where currency has multiple functions besides buying and selling, which adds variance to the game. 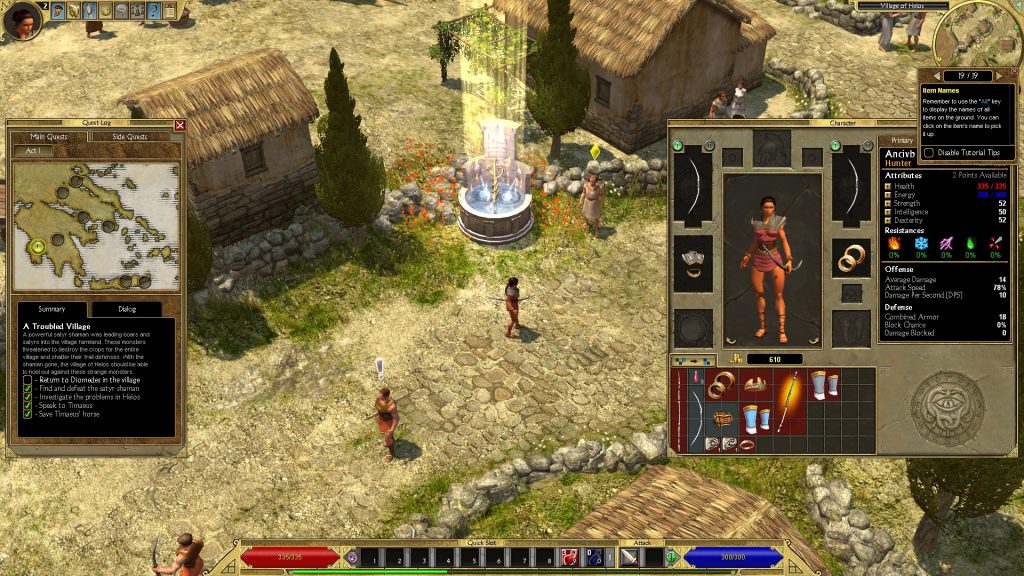 Aside from the brilliant re-release of Titan Quest, the lore is immensely immersive. A very good game to get anyone interested in this genre.

Amongst various other features such as social mechanics and guild championships, an aspect of an aRPG is lore and the world that everything takes part in. The more effort there is put toward the game lore, the more immersive it becomes and the more invested players will be toward the world and its characters. I quite like The Incredible Adventures of Van Helsing, as that game has a well thought out and interesting story to it. Using a well known figure and adding layers and layers of new, strange, and wacky fantastical ideas on top of what most people already know about Van Helsing. Even though the game has multiplayer and co-op, one could mistake it for a single player game only. Another game that does lore decently well is Titan Quest, which recently got a fantastic remastered edition on its 10 year anniversary. Titan Quest is an aRPG based on Greek mythology and incorporates a lot of the standard features that an isometric aRPG would have. Lore is strong in this, as it utilizes themes seen in books, films, and even other games. 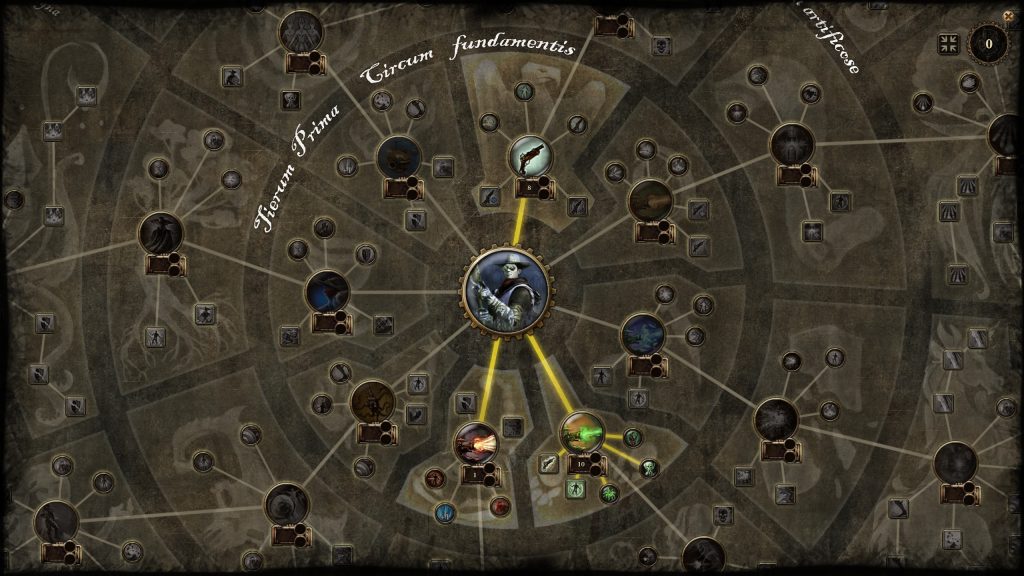 A crucial component of aRPGs is how skills are structured. How a character progresses through a skill tree is one aspect that is never the same as each game has their own brand or delivery to this aspect of aRPGs.
In Path of Exile, it has a skill tree that is effectively shared with all characters within the game. Each character has a different starting location on the skill tree and each character has many branches to choose from. This is a great skill tree for people to plan out and decide on the kind of build they want. 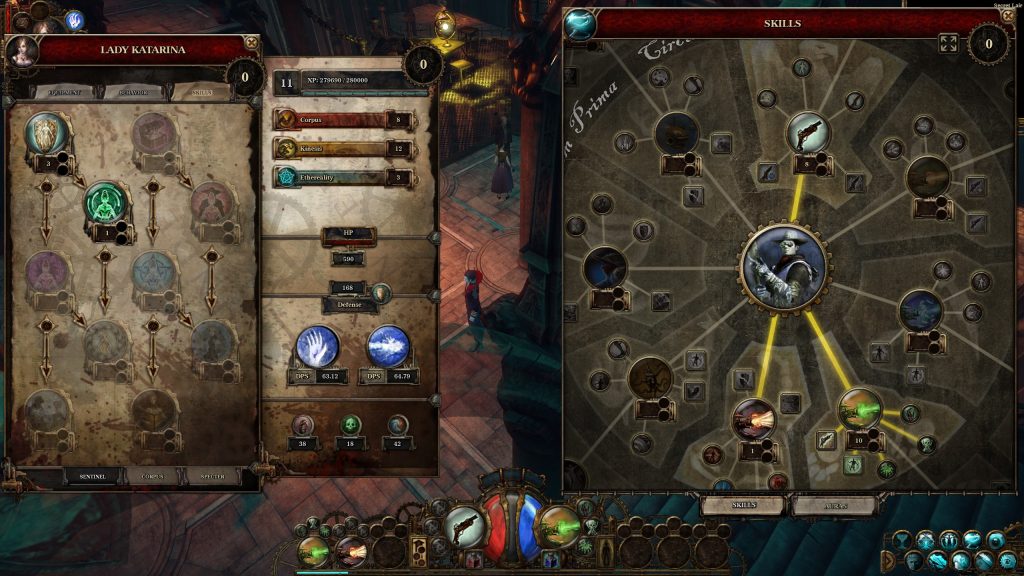 However, to compare to that kind of progression another game, The Adventures of Van Helsing (any version) has two skill trees. One for your main character and one for you companion NPC. This is scaled down a lot more than Path of Exile and many other aRPGs, although the skills that are available feel much more unique and have a greater change to what you are able to do within gameplay.

These systems will usually help define a certain style a developer wants to stick with, Path of Exile is more or less designed to allow users to have specific builds in mind, whereas Van Helsing is a more story driven, narrow yet more challenging and focused experience.

Path of Exile’s skill tree has multiple starting locations for each character but share connections.

Gameplay is king when it comes to creating a successful aRPG. What makes up this gameplay is structuring your skills, character types, and abilities—it will be a large part of what your player will be interacting with. It will also determine much of the style of how gameplay is presented. Whether it will be a more detailed and technical experience which relies on a players attention to detail when upgrading through the game or a more lax style of progression with more focus on lore. The more engaging the gameplay is, the more addictive the game will become. If the aRPG is interactive and has well thought out features with a lot of skill customization or different ways to progress it will be received well. One thing players look for in aRPGs is control to the core experience, skill tree progression and the ability to customize elements related to a player character including visuals and weapon upgrades factor into this. If there is no focus in this area then it won’t be engaging enough and soon players may get bored of the game or the intended experience.

Ultimately, a keyboard and mouse game, regardless of genre, boils down to clicking the mouse and tapping on the keyboard. By focusing on the qualities that make a genre enjoyable, we as developers can better understand what makes a game fun. After all, while some enjoy the grind (and there are certainly popular clicker games!), it doesn’t hurt to strive for something more!