Barcelona Games World: The Most Important Gaming Event in Spain 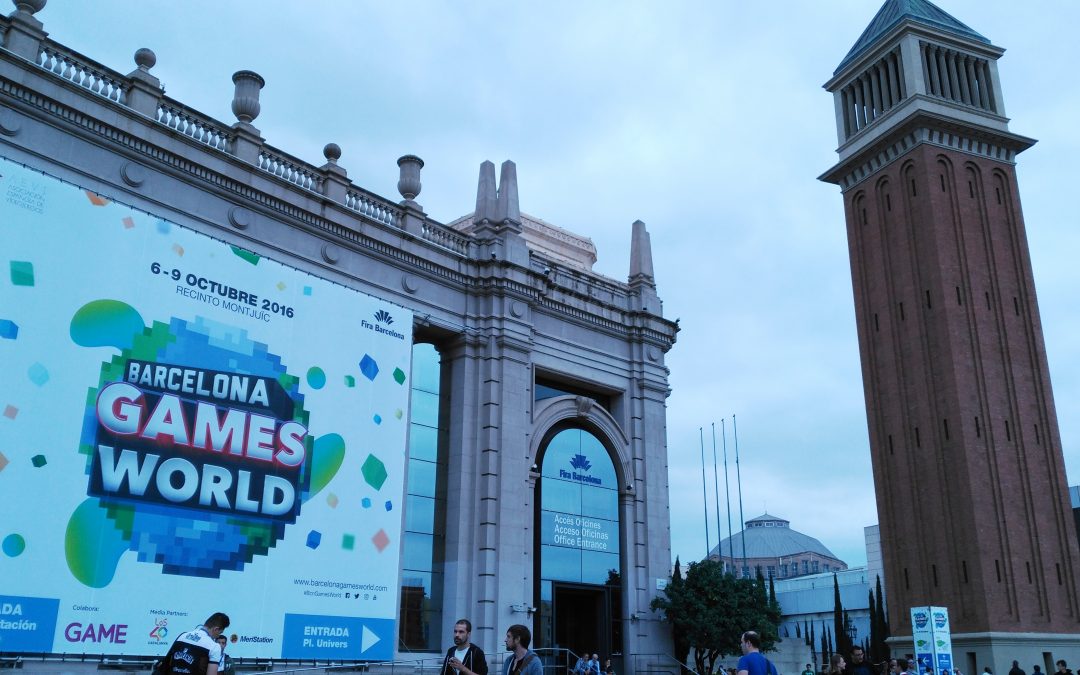 When it was announced that the biggest video game event in Spain was taking place in Barcelona, the city where I’m living right now, I almost jumped out of my seat.

Despite being the first year Barcelona would be hosting this type of event, the convention surpassed expectations and garnered more than 120,000 visitors.

My best friend and I visited the exhibition on Sunday, which was actually the last day of the event. Queues were massive and the visitors had to wait more than two hours to enter. Once inside, waiting lines were anywhere there was a game to play, so we needed a lot of patience to fully enjoy the experience. I think this was the worst issue of the exhibition and what people will be complaining more about.

AAA companies, indie developers, universities, hardware manufacturers, and local stores placed in five different areas became part of the experience. Keep reading to find out what we found there (and sadly what we missed).

Xbox One and PCs: The Microsoft Duality

Microsoft was the first big stand we visited and they did not let down. Players could enjoy the latest releases, such as Gears of War 4 or Dead Rising 4. Electronic Arts provided the most anticipated games—FIFA 17, Battlefield 1, and Titanfall 2.  In total, visitors could try those and more video games in over 150 Xbox One and Windows 10 devices.

We followed the pop music and had the opportunity to enjoy a dance competition with the Dance Central Spotlight video game. We were amazed by the precision of the Xbox’s Kinect, especially with the movement of the hands. We couldn’t stop our feet from dancing the last Avicii’s song with the crowd. 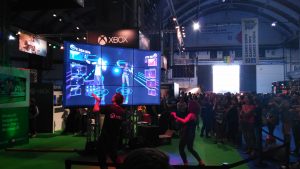 A few steps ahead, 22 players were playing an online football match in the last game from the FIFA franchise. The cool thing is that each person was controlling his own football player. We must admit that those graphics look like a real match!

Nintendo with the Young Players

In the next in-door area, Nintendo welcomed us with different video games for Nintendo 3DS and Wii U. When we saw the amount of kids there, we realized how young the Nintendo target audience is. Maybe that’s why they are trying harder to reach the adult public with the help of the NES Classic Mini, a remake of the first NES with classic built-in video games like as Super Mario Bros, The Legend of Zelda, and Donkey Kong. This time machine, for those who are nostalgic, was also presented there.

My best friend is a big fan of the Mario franchise, so she was delighted with all the video games we could play with the famous plumber as main character. In my case, I prefer the variety and serious games other companies offer.

Nintendo invited Charles Martinet, the dubbing actor that gives voice to Mario Bros, to present Mario Party: Star Rush for Nintendo 3DS and Paper Mario: Color Splash for Wii U. We weren’t lucky enough to see him, but we know that attenders were looking forward to hearing him say Mario’s famous catch phrase.

Playstation was the King of Stands

Sony’s stand was by far the most spectacular one (and the most blue). We got very excited to see that, for a change, there weren’t any queues to try Playstation VR. Our joy dried up when they told us we needed to be in a waiting list in order to try the devices out. Many people complained that the waiting list system never went public before the event and that they were stuck with just watching the lucky ones spinning around in all their VR glory. 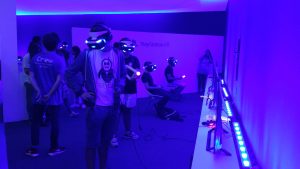 We tried to forget our disappointment by visiting the Resident Evil 7 booth. While we were waiting in the queue, we could hear the players screaming inside the terror house. They were playing Resident Evil 7: Biohazard, the first video game from the franchise that works with VR. Suffice it to say, the experience was totally immersive and frightening. Other important video games that attracted convention goers with decorated booths were Call of Duty: Infinite Warfare, Mafia III, and The Last Guardian.

Hajime Tabata, Square Enix Director, received an award for lifetime achievement and also presented Final Fantasy XV to the public. Every day, tournaments from the Playstation league were celebrated in Sony’s stand.

Bandai Namco was another company from the group of the “important ones” that attended this event. They presented some novelties such as Dragon Ball, Naruto, and One Piece. However, the preferred launch was Tekken 7, which allowed people to play in a real wrestling ring. Tekken’s producer, Katsuhiro Harada, was himself featuring the video game that will be released for Playstation 4, Xbox One, and, for the first time in the franchise, also for PC.

2K Games’s presence was also remarkable thanks to the basketball court they included to advertise NBA 2K17. 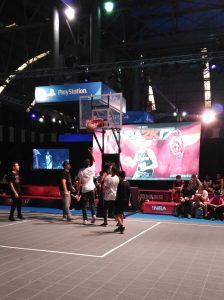 The most nostalgic part of the event was waiting for us upstairs. We enjoyed a huge collection of pinball machines but we preferred the video consoles through time exhibit, as we saw our childhood and teenage years pass in front of our eyes.

The video games area was made up of more than a hundred devices from the Amstrad PPC512 to Playstation 1; players could go back in time in front of CRT screens. We played Mario Kart and Donkey Kong Country for Super Nintendo, Sonic on the Sega MegaDrive, Crazy Taxi on the Dreamcast, and Tekken on Playstation. We even tried the first immersive experiences in the unpopular Virtual Boy by Nintendo. This was one of the best things about the event and we could enjoy it so much because it wasn’t as crowded as the rest of the booths.

If a visitor still felt eager to play more old games, they could spend their money on the retro market. Local and national stores were selling packed and unpacked video games with very competitive prices. Of course, there were also controllers, consoles customization packs, and varied merchandise. We tore ourselves away from the market to save ourselves from ending up as poor as a church mouse. 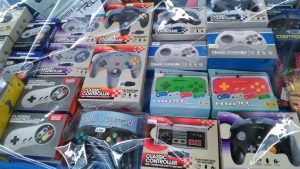 If you are wondering if I resisted the tempation to buy anything I must admit I went back home with a Mario Bross plant to decorate my living room,

Indies and How to Become a Pro

Of course, there was an area were indie companies could prove that they are capable of making quality video games without the extravagant budgets of the AAA devs. All of the indie developers were willing to demonstrate the products they have been working on this past month. We specially liked the mobile video game City Nostra by Geomotion Games. Taking advantage of GPS games’ popularity thanks to Pokemon Go, players will have to conquer city areas to become the most powerful racketeer. 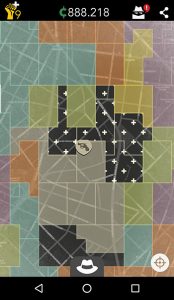 Another cool demo we had the chance to play was Caveman Warriors by JanduSoft, a four player co-op 2-D platformer with four different characters, each one with their own special attack. It was really fun to play as a caveman on an arcade board, though the final version of the game will be released for PC, Xbox One, and PS4. The developers were very nice and answered our questions happily. We liked the fast that they asked for feedback right after the game experience through a surve. This is something that can benefit them a lot to keep improving (devs take note!).

Different universities advertising degrees and PhDs specializing in video games development had their space in this event, proving that the learning opportunities for the person who wants to start in the video game industry is still growing. I gathered as many brochures as I could about video games development although I don’t know when I’ll have time to stretch my skills. Smaller studios also offered workshops to learn 2-D and 3-D graphic design or music composition for video games. My friend, who is a graphic designer, also found some people to chat about specific formation for graphic designers in the video games world. As a fan of mobile games I was quite dissapointed to check there was almost no offer of this type of video games that have experimented a big boost over the last years. The presence of more companies based in Barcelona was aslo missed. 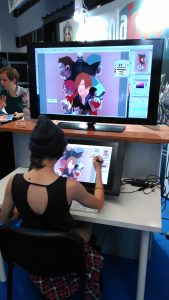 Sadly we didn’t have time to visit all of the 53,000 square meters (that’s about 570,000 square feet!) of the exhibition in one day. There were very interesting talks by subject matter experts, as well as video game competitions distributed among the four days the event took place. Overall, we saw a lot of new and surprising things, and the day went by pretty fast visiting the different stands. However, everybody complained about the excessive number of people attending. There were queues everywhere and sometimes the wait just wasn’t worth it. Now that the viability of the event has been proven, the key to complete success next year will be to expand the general space, add more devices to play with, and have more staff available to guide the visitors. We will surely be there again to inform our readers!