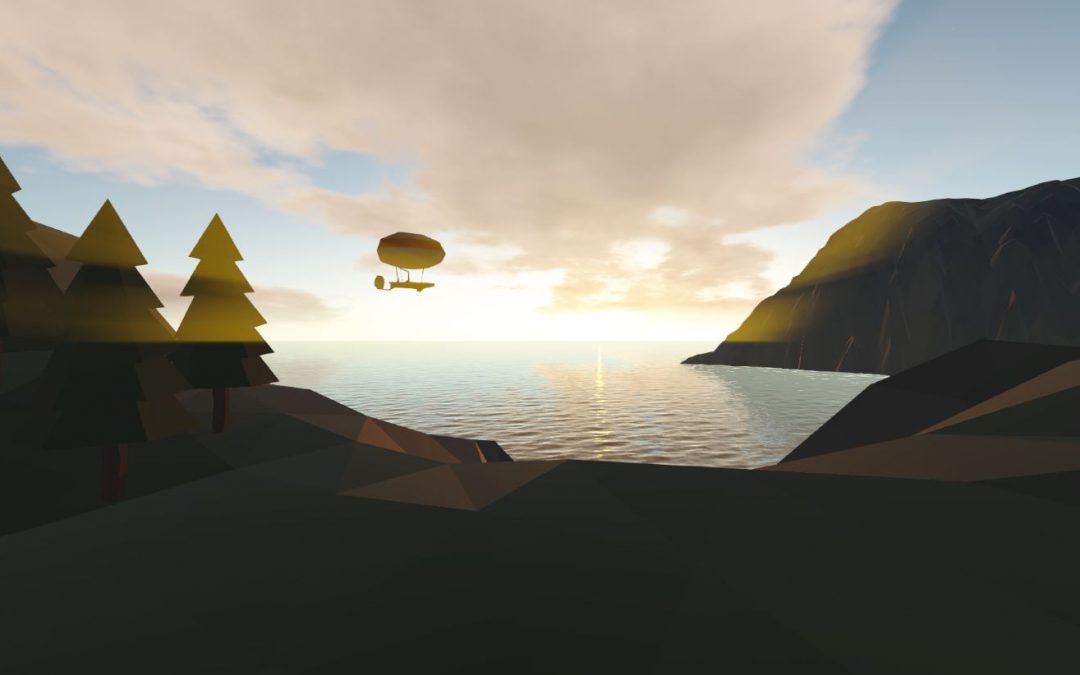 We’re working with Jeremy Jones and his team at Feudant Interactive to promote their new game, Sky Trader. Check it out on Greenlight!

Even though I started making games when I was a child, and never really stopped, I had a hard time settling into game development full-time. I was too curious about everything else the world had to offer! My list of careers is a long and varied one, including being a pilot, a military reservist, an air traffic controller, and a long-haul truck driver. Eventually, I decided to take on game development full time. I’ve had the pleasure of working with some really great game development companies over the last six years, ultimately leading to the creation of my own company, Feudant Interactive. 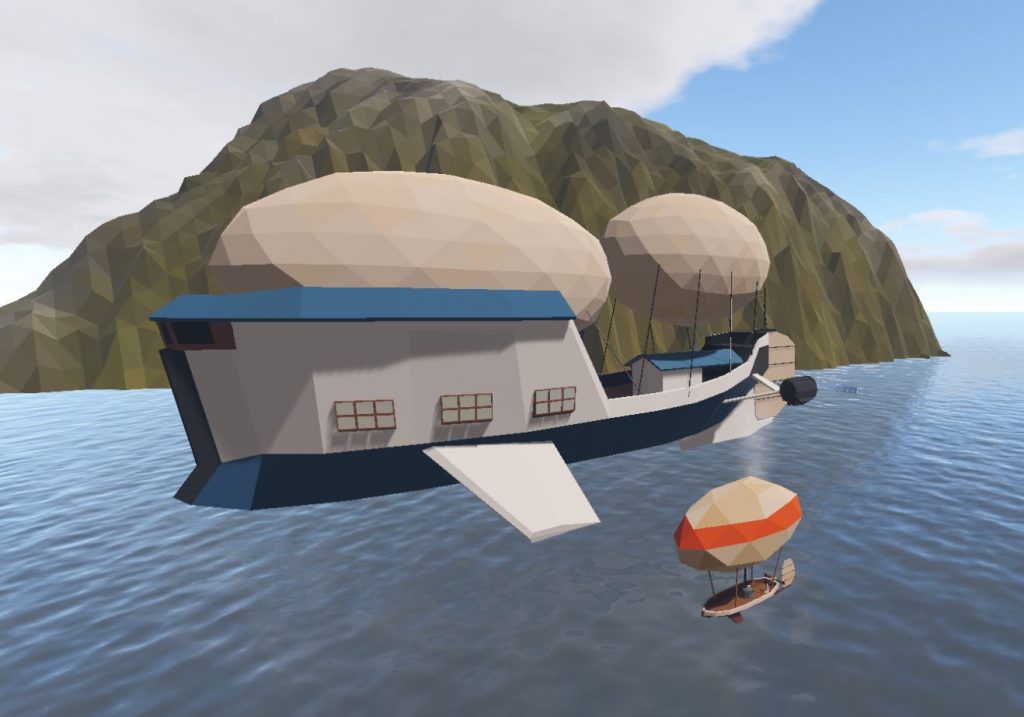 Feudant is a very small company, consisting mostly of myself and my wife Jen. I handle design, coding, 3d modelling, and some 2d art. Jen takes care of the business-y stuff, and we outsource things like music (Dale North of Scarlet Moon Productions) and marketing – thank you Black Shell Media 😉

I had lots of favorite games growing up, including Microsoft Flight Simulator (arguably not much of a game), Ultima 6 and 7, Baulder’s Gate, Final Fantasy 6, The Elder Scrolls, and a bunch more. I always loved games with huge worlds… games I felt I could live in. Ultima 7 was an early example of such a game. I remember it feeling so vibrant and alive, it was almost like the game would just carry on without the player doing anything at all!

If I could define a single characteristic of games that I find most appealing, it would be immersion. Let me step into the life of a pilot/adventurer/warrior and live a day in their shoes! This is a big design principle behind Sky Trader. 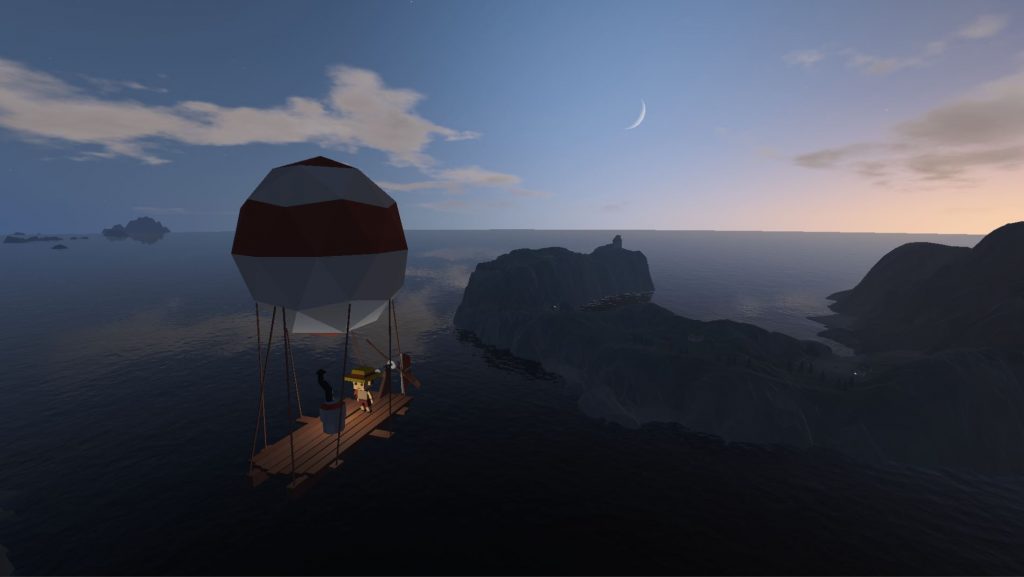 Sky Trader has been directly inspired by trading/exploration games such as Windward, the Port Royale series, and Sunless Sea. I have also drawn inspiration from a handful of RPGs, and even from my love of flight and shipping simulators (although Sky Trader isn’t a simulation in that sense).

The first spark of inspiration for Sky Trader can be traced way back to Pilot Wings on the SNES. I was freely flying around and decided to land in a small town… of course the town was the thinnest of facades, but I was struck by how cool it would be to have a huge RPG world full of little towns and people going about their business. You could travel from town to town in some sort of flying machine, exploring and taking on missions. It was from this tiny idea that I built out the design for Sky Trader!

4) The game has a very distinct low-poly art style — tell us about the art direction.

The low poly art style has been an integral part of my vision for Sky Trader since I started developing it in earnest. The look is largely inspired by the work of amazing low-poly artists such as Timothy J. Reynolds. Something about this style of artwork draws you in and makes you want to explore every nook and cranny, which perfectly captures the experience I want players to have in Sky Trader.

There is also a very practical reason for my sticking with this style. The models and terrain come together much more quickly since they don’t need to have texture and normal maps. Since I am currently a one-man show, this allows me to generate more content as well as allowing more time to work on other aspects of the game. 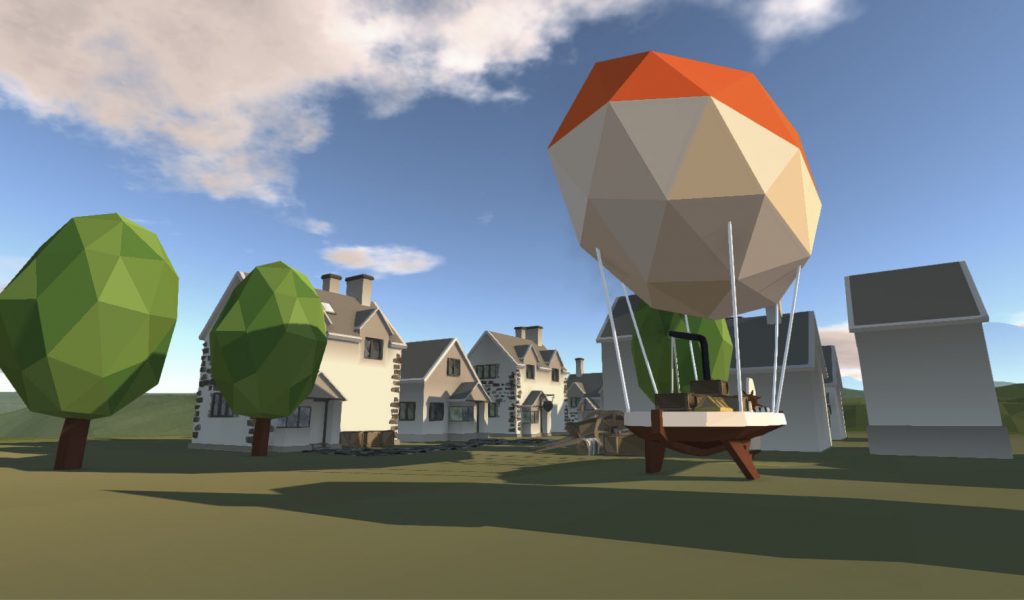 5) How big is the open world? What kinds of interactions and freedom can the player experience?

It is actually quite absurdly large… currently it is about 60 km x 40 km (37 miles x 25 miles), divided into 3 major regions. The finished game will include at least 4 more regions for the player to explore, making the final dimensions even larger! Before anyone draws any comparisons to large games such as Skyrim or Fallout 4, keep in mind that the level of detail in Sky Trader is much lower. Sky Trader’s engine is basically that of a flight simulator, and as such it can be quite large. Still, with a surface area of over 2,500 square kilometers, the player will have plenty to explore!

The player has full freedom to explore the world of Theria, but will initially be limited by the range of his/her airship. Airships need to keep their boiler’s fired, and while scavenging for timber is an option over land you will be hard pressed to find fuel while crossing open water. In time, as the player upgrades their ship, fuel will become less of a restriction.

While exploring, the player is free to land wherever they want to. The most interesting places to land will include communities where the captain can trade goods for coin, upgrade and repair the ship, hire crew, and chat with the locals. Sometimes, these locals have quests for you to complete… if you are successful, it is possible to unlock some really cool stuff such as upgrades, map pieces, and even new ship designs!

As the player makes new areas safe, it will be possible to establish trading posts and hire more ships. These airships will fly known trade routes, taking care of the mundane aspects of trading and earning you enough coin to continue pushing farther into unknown territory. The player will be free to follow the main story or go off on their own and build their trading empire!

6) What is next in the pipeline for Sky Trader? How much more will be added on Steam?

Currently the first two areas are more or less complete with most of their towns and quests. I am working on the third region right now, as well as some tweaks to the world economy and smarter AI for both enemy and friendly airships (they are currently a bit dull-witted).

I hope to release the game as an Early Access title on Steam… I’ll pause here for booing and egg throwing. All kidding aside, Early Access definitely does carry a stigma right now. It is, however, a great tool for getting a title in front of players early so that they can have some input into it’s future direction.

I hope to follow in the footsteps of great Early Access titles such as The Long Dark and RimWorld… games that really set a high standard for quality and developer responsiveness. Honestly, I really want to have an open dialogue with the community and have the chance to add cool features I haven’t even thought of!

Before releasing on Early Access, I plan to have the first 3 areas complete, 4 player-flyable airships finished, as well as most of the core features implemented. I also plan to make very sure it will run on it’s target spec and be as bug-free as possible!

7) What’s one piece of advice you’d give to developers trying to make a large open-world RPG?

The biggest piece of advice I can offer is to “choose your battles”. For example, if you decide on gorgeous photo-realistic graphics you will have to reduce your feature set and world size. Likewise, if you have a list of features a mile long, you won’t have time to work on other aspects of your game (like content, for example). The only way around this is to throw absurd amounts of money/time into the project, and most indie developers don’t have that luxury.