No More Heroes 2 – Sacrificing Gameplay for an Underlying Message 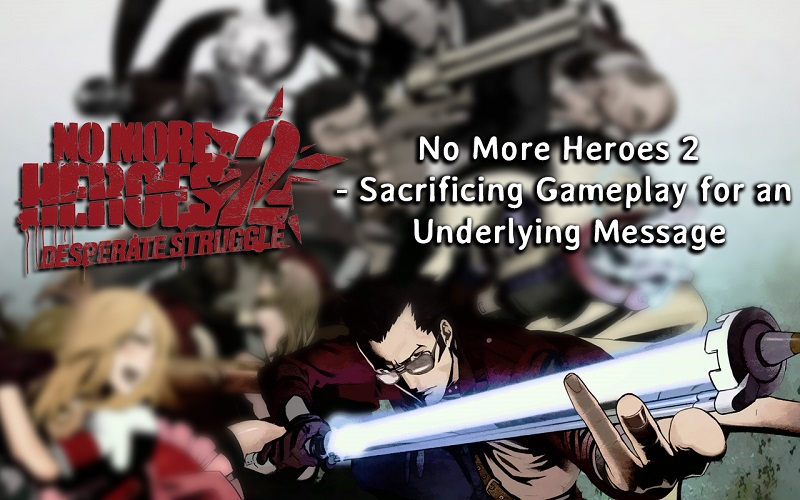 When the Nintendo Wii was released, I made a departure from console gaming and moved to mostly gaming on the PC. Although I acquired the console for free, for quite a few months I didn’t really have any interest in buying any games for it and was stuck with playing around with the built-in sports games. In early 2009 I saw some footage of a game called No More Heroes and pretty much instantly fell in love. From the footage alone, it looked like an ultra-violent hack and slash stylized mess of a time and I looked into getting a copy of it. After completing the game in one long afternoon I was immensely surprised by how refreshing the game was and how much fun I was having. I did some research into who developed the game— Grasshopper Manufacture—and looked at some of the other titles they released. The CEO of Grasshopper Manufacture is Goichi Suda, who goes by the alias Suda51. Soon enough after playing his games, I became a Suda51 fanboy.

As 2010 fast approached I was looking forward to the sequel, No More Heroes 2: Desperate Struggle. The first game had poor sales performance in Japan, where it was first released, but despite that, the sequel looked like it would be released state-side. That didn’t stop fans from worrying about the possibility it wouldn’t come out due to poor sales, however. As Suda51 has said in interviews, No More Heroes 2 is a game that only exists because of the fans that received the first game so well. No More Heroes 1 to him was more of a demo. At the time of its release, a lot of new ideas were being experimented with on the Nintendo Wii and the use of motion controls was a new trend. 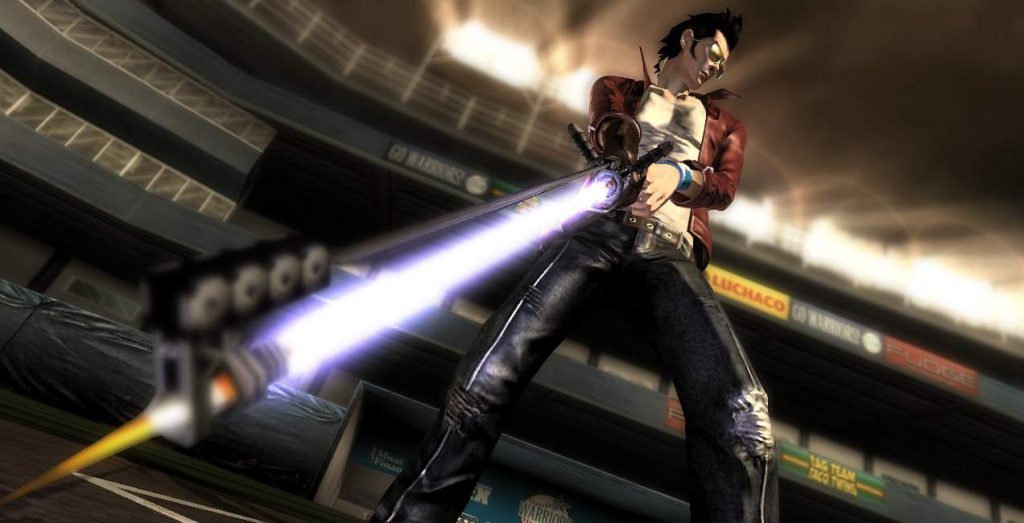 The main protagonist Travis Touchdown, as seen in NMH 1

So Why Do Things Feel so Different This Time ‘Round?

No More Heroes 2’s gameplay went through some elaborate changes and you could even play the game with the simple classic controller. Most of the motion controls are replaced with simple swish functionality, or if you use the simple classic controller, it’s simply moving the analog sticks. Now there is some interpretation to be made as to why these changes were made. Hopefully, I can convey that in this article as there is much debate over why this came about and the reasons why Suda51 made changes.

The worldwide audience really felt attached to the extravagant main character, Travis Touchdown. The main interpretation of Travis is that this character is a portrayal of the player. This plays into the story and gameplay elements as to why they changed so drastically. A simple way to describe these changes in No More Heroes 2 is that Suda51 noticed a change in the game industry as to what games were being made, what the majority of players were spending money on, and what ideas were being put out there. Suda51 translated those changes to the game industry and kind of implanted them into No More Heroes 2. The game is a lot more simplified, with the controls being much more basic and much of the combat became repetitive. Due to the basic controls and simplified gameplay, the number of enemies was increased, which acted as bloat, so it ended up having lengthy combat sequences with less interesting interactions between boss battles. Now immediately, you might be thinking this is a bad thing, and to some degree, I can even agree with that, but the important thing is the gameplay is a mirror of the games industry at the time and, to be honest, is kind of clever.

Another interpretation regards the story. In No More Heroes 2, Travis Touchdown is shown to be fed up with the killing business and the toll it has taken on his life in general. This is especially important at the end of the prologue because people close to him lost their lives because of his actions. The gameplay in No More Heroes 2 can be interpreted as Travis’s feeling toward the “job” of killing so it feels a lot more bland, frustrating, and comes naturally to him hence the repetitive nature of combat. This choice particularly doesn’t fill many players with much satisfaction if they were looking for an improvement to the first game’s style or mechanics. It was a risk although this risk did pay off and fans still loved the game. The many strengths of No More Heroes 2 are how it can be over analyzed and talked about from a plethora of perspectives.

As I mentioned, the story of No More Heroes 2 is a satire/commentary on the current game climate, and even the characters of the game break the fourth wall every now and then to reaffirm this. The first sign of this is how the game handles the problem of the plot in how you must start at Rank 51 and work your way up the ranks again. The two main characters, Travis and Sylvia, look at the player and shrug their shoulders and it is never of mentioned again. Throughout the game, you won’t actually face 51 bosses in each of their own battles. This may have upset some people, as Suda51 did not specify this in the marketing of the game and still went with the number 51 so it was a little confusing. The player is still treated to roughly the same number of boss fights as the first game so nothing is really lost. Even though the gameplay was changed drastically, many of the environments and locations had a decent amount of work put into them. It’s as if each section of the game is played out in parallel dimensions and I believe Suda51 intended it to be that way.  Each level is vastly different to the previous with different mechanics thrown into the mix that is specific to each level based on the themes presented or the style of boss you have to face. 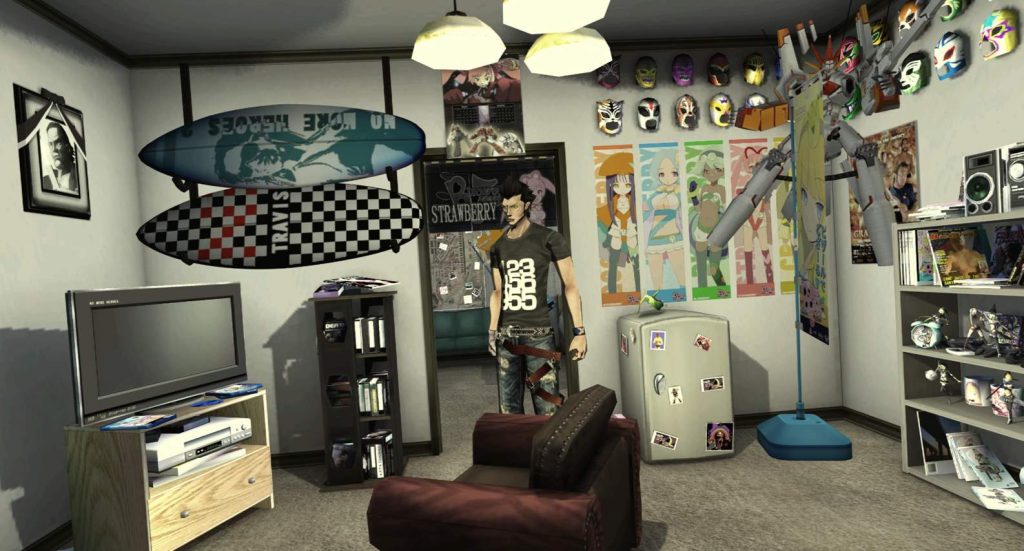 Travis’s lifestyle is a satire of modern otaku culture.

Is This a Kind of Risk Developers Should Take?

Passion comes to mind as the reason why Suda51 decided to make these changes. He felt that he had something to say and used his game to say it, designing the gameplay and the story around that idea. Most of the gaming industry would instantly say that this is a bad idea. Although in the games industry, developers are taking risks all the time and in this case, Suda51 also had a huge passion for the work that he was doing. Ultimately his decision to change the gameplay of No More Heroes 2 ended with somewhat mixed results. Reviews were strong, as many still loved the game, but many voiced their concerns over the changes.

For a new developer to take a risk like this, it would clearly be a case-specific situation. What comes into question are a few things. Would the reason for drastically changing something in favor of story or in favor of mechanics be able to benefit you in your game’s public reception? Also thinking long term, could such a drastic change be a detriment to your product?

In the end, the decision to do this comes down to developer choice and reason. Most developers want to play it safe like we see so often on Steam Early Access or places like IndieDB when creating their first game. Although sometimes a risk can have a drastic effect on how your game is received by the public either positive or unfortunately sometimes negative. Either way, you’ll garner both fans and haters.