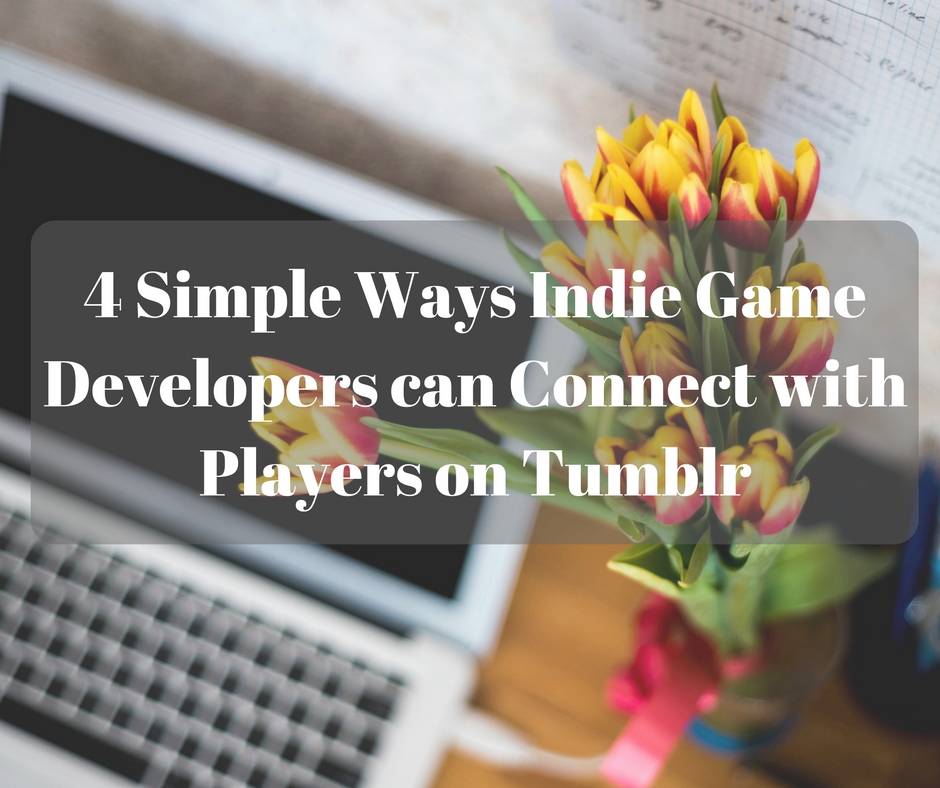 If I were to ask you which social media platforms you regularly use to reach out to players, what would make the list? Twitter is probably a given, maybe Reddit.

But what about Tumblr?

A developer blog is an excellent way to find and connect with potential players. And unlike most blogs, which are only shared socially via links, Tumblr lets users “reblog” entire posts, which means your posts are much more likely to be seen. When used correctly, Tumblr has the power to magnify your social reach in a big way. But it can also be a bit confusing and overwhelming for new users to get the hang of. To get you started, here are four simple ways your indie dev team can use Tumblr to its advantage.

1. Behind the Scenes Blogging

Tumblr is a great place to pull back the curtain and let players peak behind the scenes. Share info about upcoming updates, tease players with screenshots of new projects, or even just share some team selfies from the office. Having a developer blog lets you keep players up-to-date on your projects in real time. And even better, the reblog and commenting features on Tumblr lets them interact with you and your team. Tumblr is a great place to create the “one of us” feeling among players, which is exactly what you want. When players feel connected to your team, they are more likely to want to support your work.

Tumblr’s “Ask” function makes it incredibly easy for dev teams to answer players questions, comments, and concerns. Answers to “Asks” are published to your blog (unless you specifically answer them privately) so all of your followers can see (and reblog!) the questions and answers.

I also encourage you to have some fun with this! It is a great way to answers players questions or concerns about your game, but it is also a fun way for players to get to know you and your team. Encourage people to send over some fun or silly questions sometimes. What are your favorite games? Who is your favorite character in your own game? Who on the dev team would be most likely to eat an entire pizza by themselves?

Having a hard time deciding how a particular feature should work in the game? Why not ask your players what they would prefer using Tumblr’s polling feature? Want to know how well a recent update is going over? Just ask! Tumblr offers multiple avenues for players to communicate with you- polls, asks, favoriting posts, commenting. More importantly, if you make a point to encourage players to share their feedback with you through your Tumblr, you’ll be able to keep track of it better, as it will all be coming in to the same place.

This is probably the most important way for a dev team to use their Tumblr. If you don’t make a point to build a community around your blog, it will be difficult to get the types of responses you want when you share updates or request feedback. Turn your blog into your community homebase by letting players know they can find you here and making a point to interact with them. Reblog their screenshots and fanart, and comment on posts where players are talking about your games. This helps you create that “one of us” feeling that we talked about, and will help you build credibility among players. Plus, when you interact with players talking about your game, it encourages them and others to keep talking about it. And the more people you have posting about your game, the more likely it is new people will find their way to your games.

Tumblr definitely has a bit of a learning curve to it, and it can be intimidating when new users login for the first time. But in the long run, it is a platform well worth investing your time into learning!