Building for Success by Building a List of Your True Fans

Seeing numbers like Pokemon Go’s 100 million downloads can make you feel like you can easily get a slice of that userbase pie. Even tapping into just 0.1% can still lead to a success.

Only a few games can hit the hype/attention lottery and gain mass appeal. As of Sept 2016, there are about 7,500 steam games and 2 million apps on the App Store. Statistically, only a handful of games become viral, only some make a profit, and the vast majority disappear in the void.

There’s a pattern of failed developers who spend years building a game in their Batcave, then a month before launch, they make a mad rush to market. They scribble out thousands of outreach emails, crying out for any attention at all. When they inevitably fail, they point fingers at everyone and join the ranks of games that no-one ever downloads.

This process isn’t exclusive to video games. It’s in every industry.

Almost a decade ago, Kevin Kelly, co-founder of WIRED magazine, shared the theory of 1,000 True Fans. He believed that a creator, like an artist, musician, author, or game designer—anyone who produces works of art—only needs to acquire 1,000 True Fans to make a sustainable living.

His definition of a True Fan:

“A True Fan is defined as someone who will purchase anything and everything you produce. They will drive 200 miles to see you sing. They will buy the super deluxe re-issued hi-res box set of your stuff even though they have the low-res version.”

True Fans eat up everything that you have to say. And no—having 1,000 Twitter followers isn’t the same.

Over the years, there’s been a debate about the number 1,000. Rather than be exact about that particular number, treat it as a goal that all indie developers should try to reach.

True Fans are valuable users who want to help you succeed. They’re willing to help beta test, find bugs, participate in a community, and market for you. They’re passionate gamers who are excited to be part of the process. These earliest fans become your die-hard word of mouth supporters.

Don’t let the number 1,000 scare you. If you focus on attracting three True Fans a day, you’d be at the thousand mark in less than a year.

The Type of True Fans

The key to finding a True Fan before selling your game is to make sure you find the right kind of person. 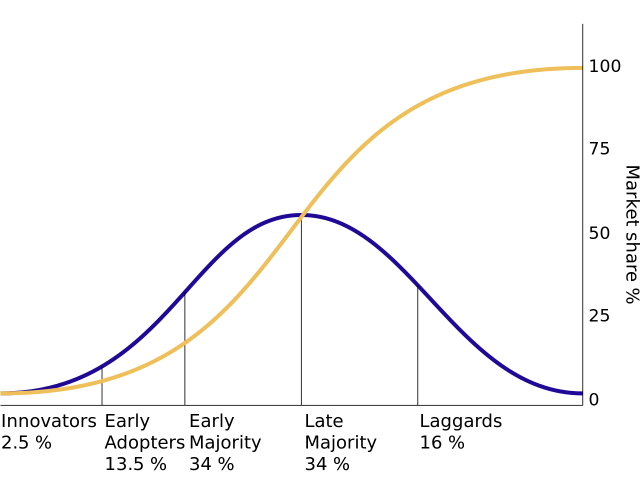 While building your True Fans list, look for the type of gamer who fits into the Innovators/Early Adopters. Those types are the ones who get excited with just a bit of information.

Frame your invitation to your True Fans list correctly to avoid confusion. Treat it like an invitation to a private event. You’re looking for True Fans and advocates who are excited to participate, not a number!

Misaligned goals will cost you. Your game will still be rough during the beta. There will be bugs. There will be missing art assets. Inviting users who fit the Late Majority/Laggards category to your beta test, you’d end up with bad feedback and terrible reviews. These types of people want to be entertained, not be a part of the development.

By inviting the Innovators/Early Adopters, you’re putting them into a mental cognition known as the Ikea Effect. The Ikea Effect was coined by the studies done by Harvard Business School, where participants gave more value to products they contributed in. For game developers: by involving fans in the process, these users will feel ownership to your success.

If you’re participating in indie-supported community activities like #ScreenshotSaturday or online game jams, connect with anyone who gives you attention. Those events attract fans who want to be at the forefront of indie games. When they engage, send them a friendly message like, “Thanks for the [comment/like/retweet]! We’re beta-testing soon, so PM me if you want to on the Insiders List!”

If you’re sharing your game through forums, subreddits, or in hidden communities where fans may congregate, treat every commenter like royalty. Giving a bit of recognition and providing an invite can turn them into a True Fan. Every interaction is an opportunity to connect.

Looking at Games Similar to Yours

Connect with beta testers from other games similar to your genre. Imagine being a gamer who gets exclusive access to an up-and-coming game that’s akin to a previous game they love. They’re going to be incredibly grateful and excited to help you out. The additional bonus is that these users are already familiar with beta programs, they’re familiar with the genre you work in, and can even provide you advice on avoiding any pitfalls that they’ve experienced in those other games.

Steam provides an easy way to segment this type of person. Visit a similar game’s store page and find reviewers with the Early Access tag. Strike up a non-salesy conversation asking about what they liked in that other game and their dislikes. If they’re a right fit, then introduce what you’re doing and invite them to become part of your list.

If you’re using Kickstarter, IndieGogo, or any crowdfunding platform, you’ll have people who invested MONEY into your project already. Get your donors on your personal email list ASAP. Push them to a sign-up page on your website so you can start connecting to them personally, beyond the crowdfunding platform.

Finally, reach out to smaller gaming sites and focus on relationship building. This connection will put you in front of their audience, allowing you to gain awareness and find fans who are willing to help the cause! It’s how SanctuaryRPG got off the ground and sold 100k+ copies.

The earlier, the better. Building relationships take time. Connecting with smaller gaming sites via Twitter early on can open the door to having them advocate for your game months down the line.

From purely a return-on-investment (ROI) standpoint, small gaming sites may not look like a good use of time. But look at it from a journalist’s perspective. Press who work for the big players (like PocketGamer, Kotaku, and Polygon) keep their eyes/ears out for all the latest news. The frequency of hearing about your game from a vast array of people will cause them to pay attention!

Your True Fans are your first wave of support.

At the early stages, you can organize your True Fans is by ordering them it in a spreadsheet. The benefits include:

A sample of how to organize it in a spreadsheet

With all the craziness of launching a game, having a single method of communication for your True Fans will keep you sane.

You can set up a unique place to congregate, like a private forum, a slack channel, or a Facebook group. When it’s time to rally your True Fans, they’ll be ready. An example: if a journalist writes a positive article, share that with your True Fans. That rush of views/comments will make the page jump higher in ranking, getting extra eyeballs from new players.

But not everyone will want to join yet ANOTHER platform when they’re already on many others. If you found them on Twitter, they may not be interested in joining a Facebook Group.

Fortunately, there’s one platform that almost everyone checks daily: email!

Aim to grab the email of your True Fans. Once you earn it, treat it with respect. Every email you send your audience should be something that is interesting and contains one very specific action to take. An email containing a small update (like a new level) will train your True Fans to tune you out or unsubscribe. A better email would be announcing a massive update (something of interest), and you need exactly 30 people to provide feedback (very specific action).

At this early stage, emailing your True Fans via BCC-emails is an acceptable way to keep in touch. It’s free to do and won’t cause much harm.

But during the launch, there’s going to be a lot of things going on. You’ll need to quickly communicate with your fans about upcoming events. But sending mass emails over and over again will make service providers believe you’re a spammer and start auto-trashing your emails. All of your hard work can disappear.

Instead, rally your True Fans list by using an email platform like MailChimp or AWeber. Let your True fans know of your intentions by sending the first email like, “To keep everyone on the same page; I’ve subscribed you to my email list. I’ll only email you [email frequency, like twice a month]. If that’s not okay, no hard feelings and please unsubscribe. I value our relationship, and we can connect in other ways!”

Once more, you do not want to be tagged as a spammer by an email service provider.

The conversion from moving them from your personal contacts list to an email platform will drop your True Fans numbers. That’s normal!

If they didn’t rejoin, they weren’t a True Fan. They could have sent your email to spam ruining your reputation. Shrug it off and remember that it’s common.

There are probably True Fans on your list who you need for them to take action. Sending them personalized emails work. It takes a bit of extra time, but the results are worth it.

Focusing on your True Fans multiplies your marketing, snowballing the attention and making it look like a viral hit. With some effort and committing to gathering 1,000 True Fans, you’re on your way to making your game a success.

Want to know another way to attract a True Fan? Through blog comments! Leave a comment with what you plan to do next!