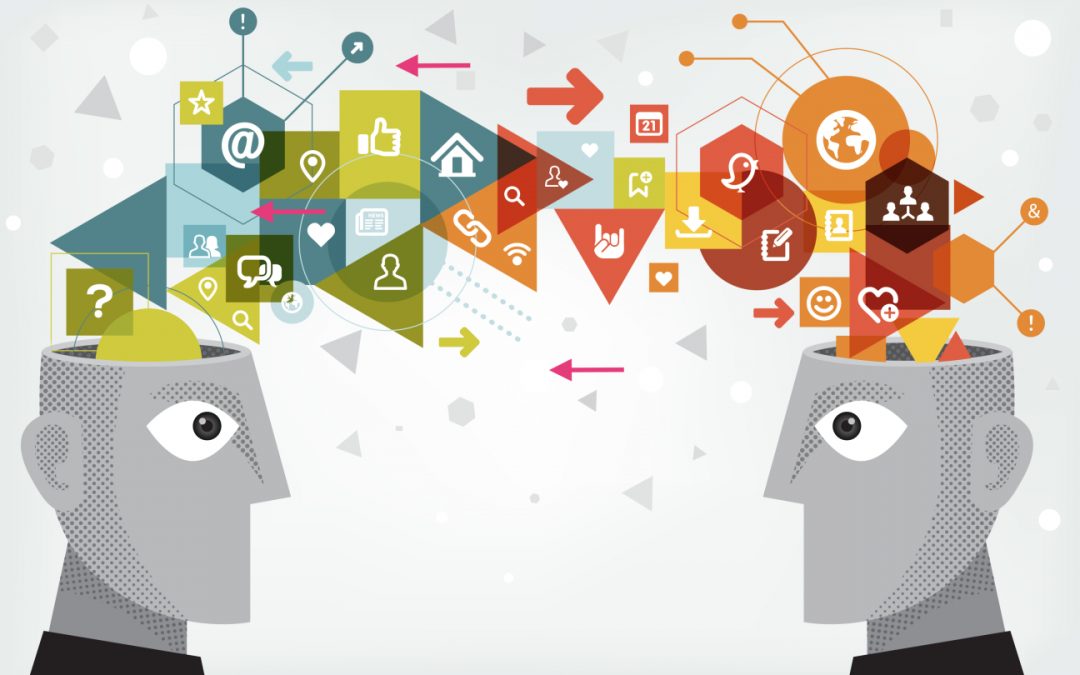 Last time, we discussed the concept of a narrative scripting language that could revolutionize the way players interact with a game world. We considered the possibility of using Toki Pona, an artificial 120-word language with 10 syntax rules, as a starting point for creating a custom language to be used for scripting purposes. In this article, we’ll be focusing a bit more on the ways in which the language might be used and what form its interface might take.

To begin with, I would like to clarify both the licensing plans I have for this concept as well as what terms are involved:

Now that we’ve defined things, I’ll be exploring how the heck Wyrd might show up in a game!

Imagine you’re playing a game and you are given the chance to say something to another character. Rather than being given a succinct list of possible responses, you could simply be given a Minecraftian style word-composition system. 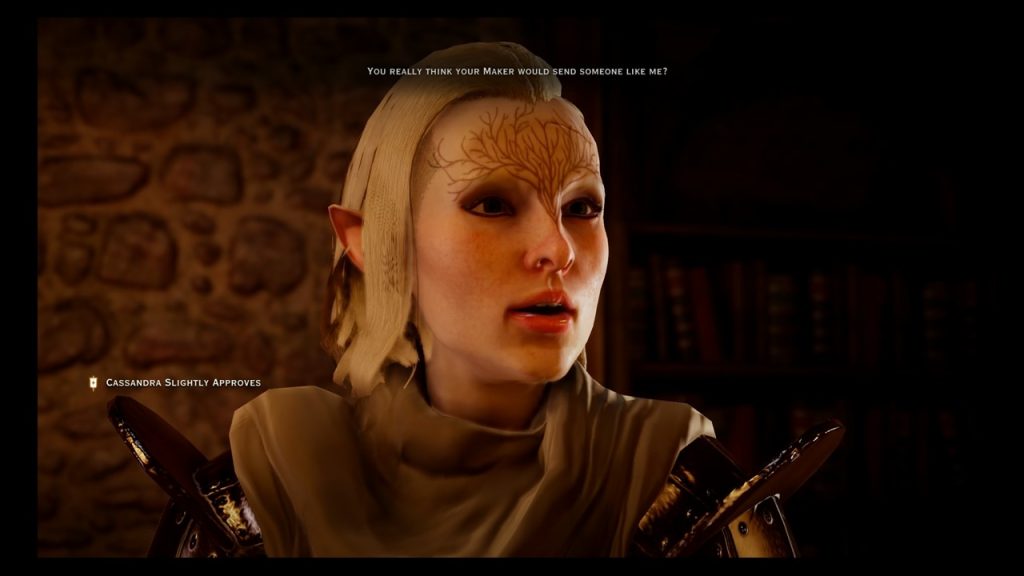 A character is encountered in the world. 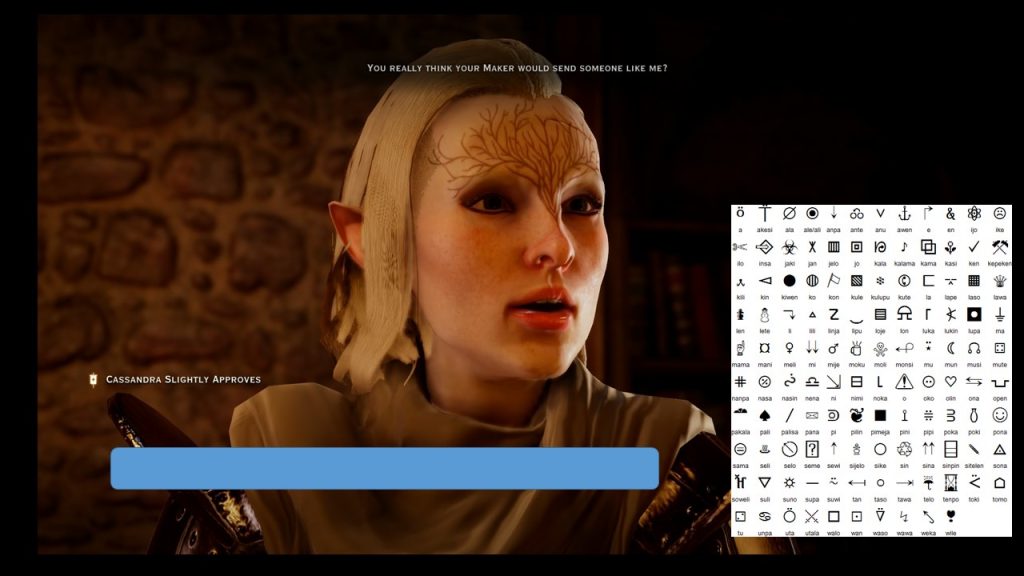 An input field and a word bank are made available to the user (players could summon it at will). 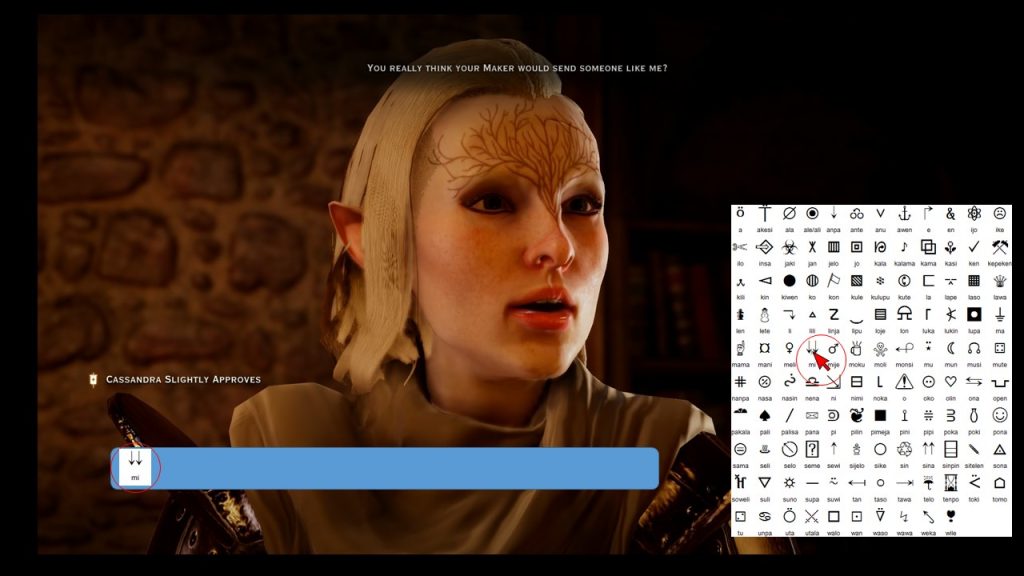 Players can click on an image from the word bank. Think of this as picking a “block” in Minecraft. 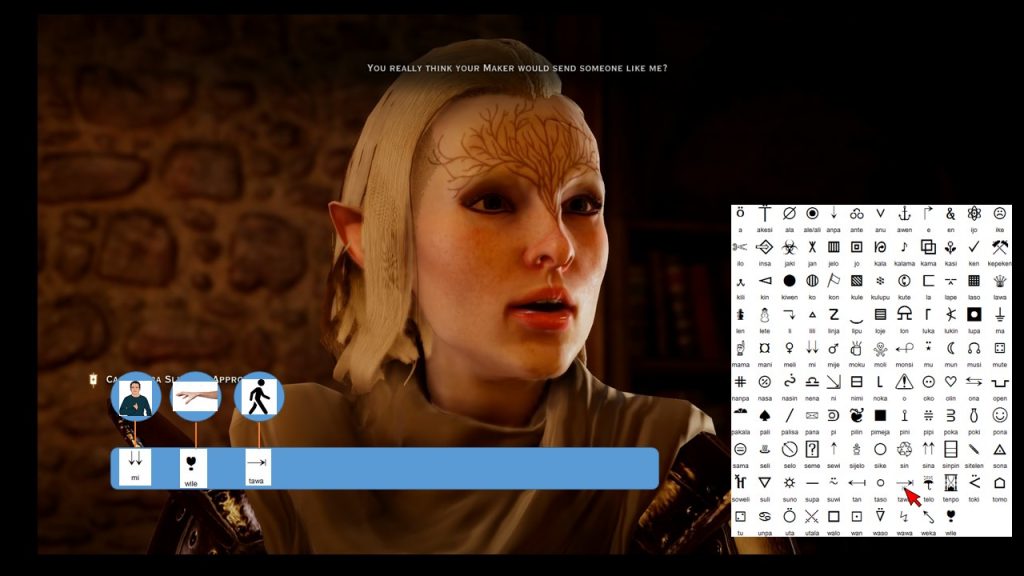 As players select statements, the system visually hints at how things are being interpreted, for example: {Myself} {Want} {Go}. These would be the things that are “crafted” from putting terms together. 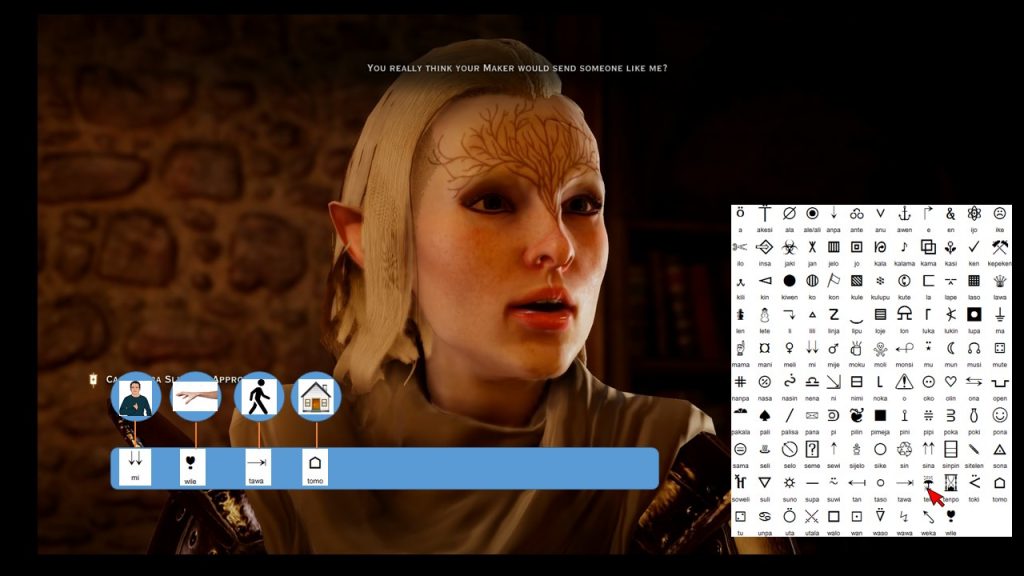 This hinting informs players of what concepts are ACTUALLY being communicated. For example: tomo a.k.a. {enclosed space} => “home” or “house.” 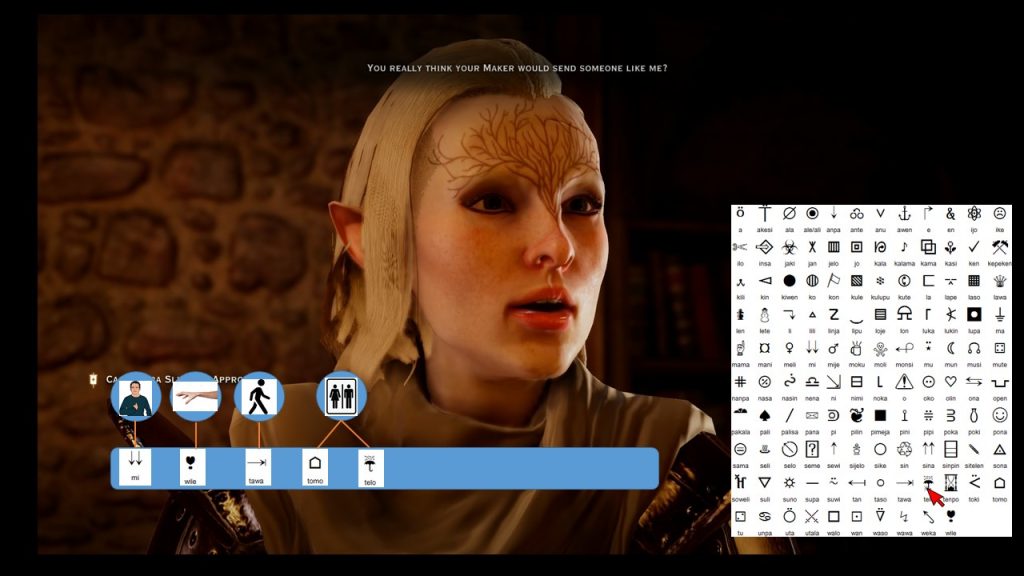 When players need to combine concepts together, for example: {enclosed space} and {water}, it can show them that it is understood as “bathroom.” 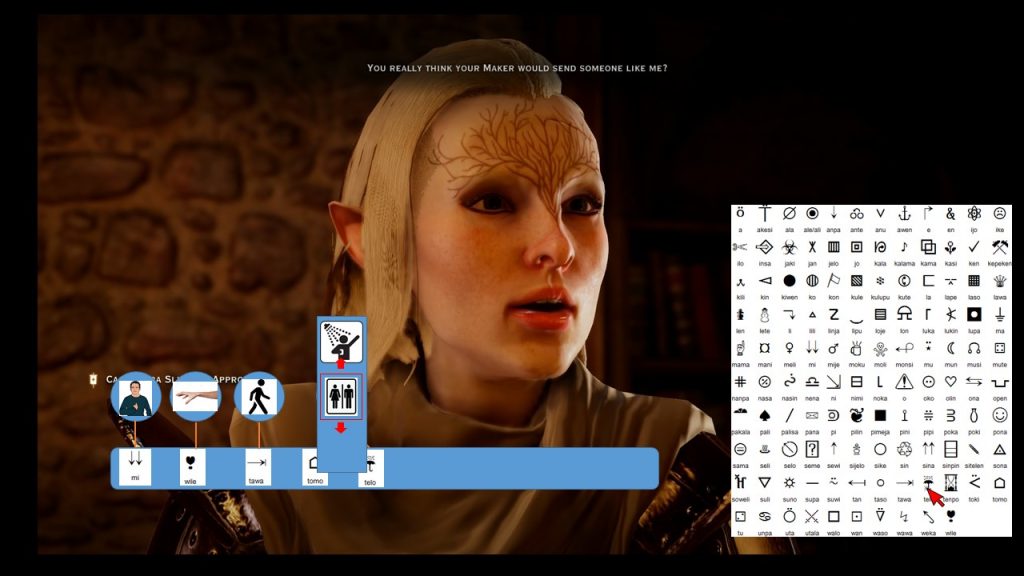 Players could then check what other interpretations are available for that combination (perhaps by clicking on it). 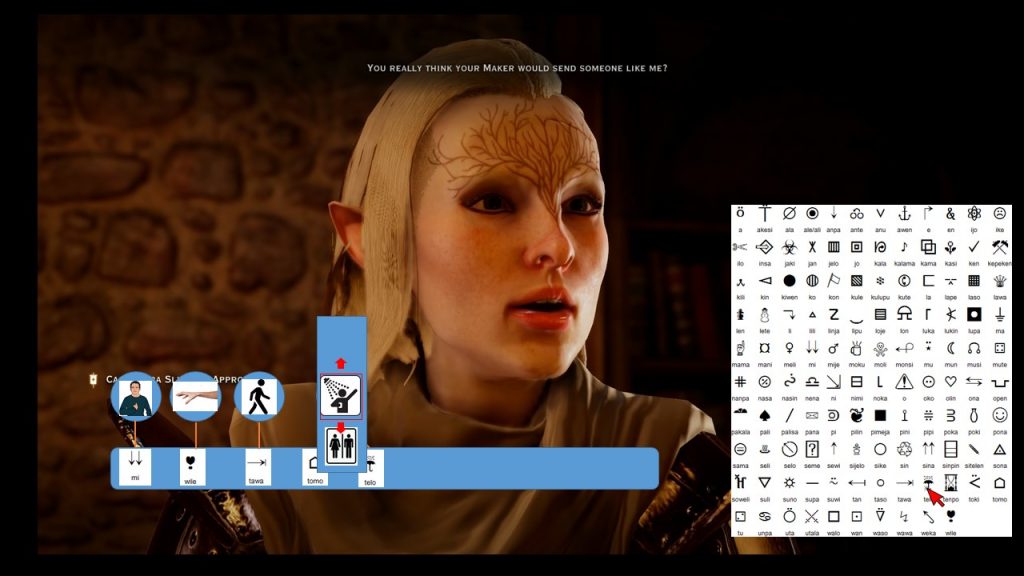 If they wished to communicate the desire to bathe/shower instead, they could select that option. 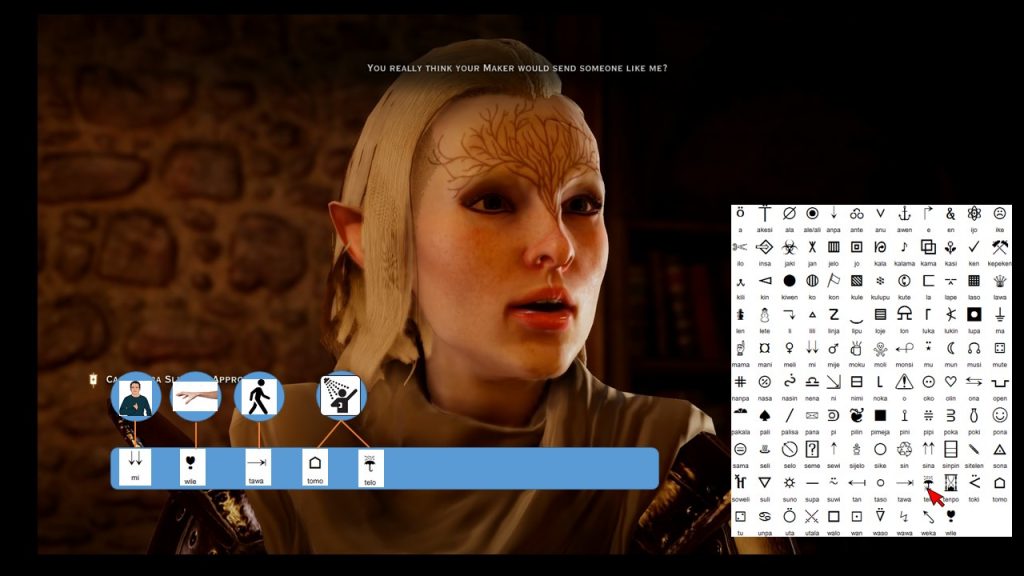 Obviously, it would be the responsibility of the Toki Sona engine to ensure there is a standardized image available for all of the desirable concepts, but limits will be necessary.

Another possibility that may be more realistic is to make it so that the hinted images are generated based on the full content of the statements made. For example, the {enclosed space} {water} combo may be assumed to be “bathroom”, but then when the player follows up that statement with, {myself} {feel} {dirty} (mi pilin jaki), then it might show the bathroom image modified to one of bathing after-the-fact. In this way, users wouldn’t be responsible for the interpretation (it can all be automated) which will allow the system to not have too much of a scope-creep going on, mapping images to concepts, etc. It also makes the player have to do less in order to fully interact with the system. Users would also be able to see how their statements impact the interpretation of previous statements.

The text concept is very much like that of the GUI input, however all that would be displayed to the user instead is a text field. Typing into that text field would display a filtered subset of the word bank below the typed text. Things typed would be assumed to be Toki Sona words (for example, “tomo”, meaning “enclosed space”, i.e. “home”, “house”, “construction”). Players would be able to hit [Tab] to move down the hint list and hit [Enter] to auto-complete the selected word and have the image and hinted interpretation pop up. This would allow for much more fluid communication once a player has pieced together the actual vocabulary of the language (you’d eventually get to the point where you wouldn’t even want/need the suggested text).

We would also likely need both input types to have expected grammar displayed, i.e. having a big N underneath the beginning to show you need a noun for a subject. If you have a noun typed, it might suggest a compound noun or a verb, etc. All versions would also auto-edit what you have typed so that it is grammatically correct in Toki Sona (things like, [auto-inserting forgotten grammar particle here], etc.).

Creation: One could easily envision a game where the player is capable of supplying what they want to make in narrative terms and then clicking on the environment to place that thing. One could then edit the behavior of anything placed in the scene by selecting it, etc..

Simulation/Visual Novel: Something more like the Sims where the player is given a character and must direct them to do and say things to proceed. What they do and say, and to whom/where they do it may trigger changes in the other characters, the story, the environment, etc.. This could naturally progress things.

Puzzle: A game where the player is given a certain number of resources (limited points with which to spend for creation, a limited vocabulary, etc.) and must solve a problem. This would be something more like a Don’t Starve or Scribblenauts variety.

Generic RPG: A regular RPG game that allows the player to pop-up a custom dialogue window for speaking purposes, but which would otherwise not rely on directing player controls through the Wyrd system.

Roleplay Simulation: A game that directly attempts to simulate the experience of a live roleplaying game. The system acts as a Game/Dungeon Master and various players can connect to the game to participate in the journey together. A top-down grid environment may show up during enemy encounters of some kind, but players would completely interact with and understand the environment based on the text/graphic output of the system. More like an old school text adventure, but hyped up to the next level.

These are just some of the ideas I’ve had for interface and gameplay using the Wyrd system. Obviously this system still needs a lot of work, but I feel there is clearly a niche market that would long for experiences like this. If you have any comments or suggestions please let me know!

I know this article was a little bit shorter / lighter than my usual fare, but I promise I will develop some more detailed content for you next time. Cheers!