Why Should Indie Devs Care About Video Game Usability Testing?

Testing the usability of your video game means evaluating how happy, comfortable, and satisfied your potential users are when they play it. It seems obvious that you’d want your video game to meet all of those standards, but achieving them is probably not something you can get on the first go. Iteratively testing usability will make you find user-centered improvements throughout the entire game development process, potentially saving you time, effort, and money down the line.

It is important to keep in mind that usability in video games is not the same as usability in websites and standard apps. Of course you need to measure the efficiency of menus, buttons, and interactions, but it is more important to focus on fun or challenge level and how your users perceive that.

Why Are Users so Important?

Usability is about measuring how people react to your product, and that is why users are the cornerstone of usability testing. If you do not find the right users to start your testing with, the whole process may end up being useless. That is why the same team that has developed the video game cannot test it: their vision can be “polluted” after so many hours interacting with the video game from the other side.

The good thing about video games is that they are usually designed to reach the largest and most diverse audience possible. It is very important to clearly define how wide your user’s target is. Having a diverse audience can make your video game reach more people, but it is more difficult to decide which features to enhance if you do not have a clear picture of the type of people that will play.

Some parameters that can be useful to identify audience segments can be:

Before you perform any of the testing techniques described below, it is a good idea to present a questionnaire to the user so you can evaluate first if that person matches your target. You can use this template, which I think is a good starting point to know the basics: 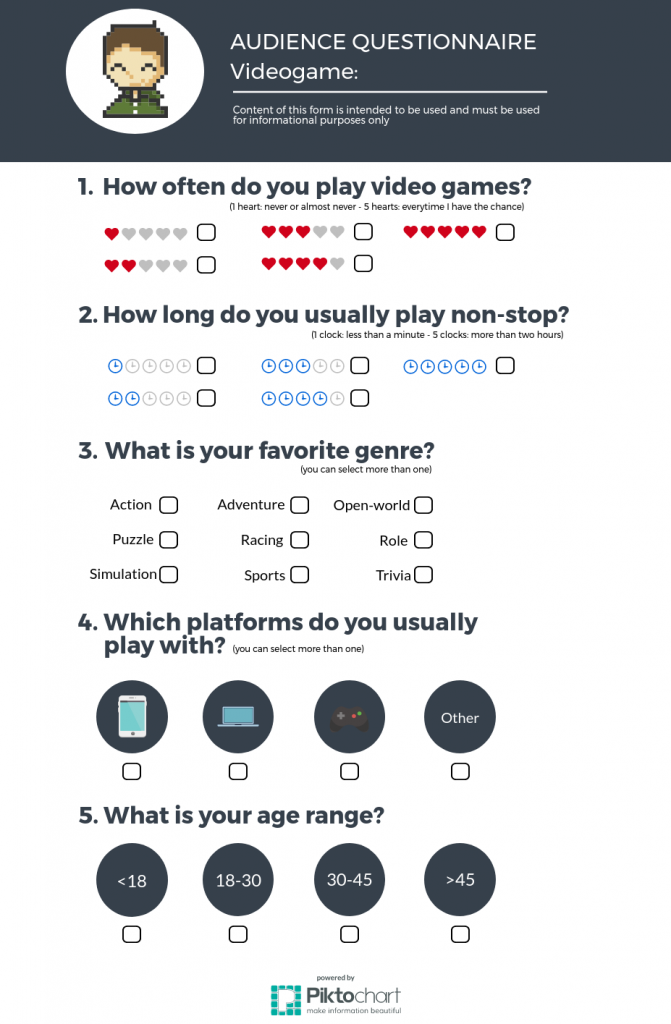 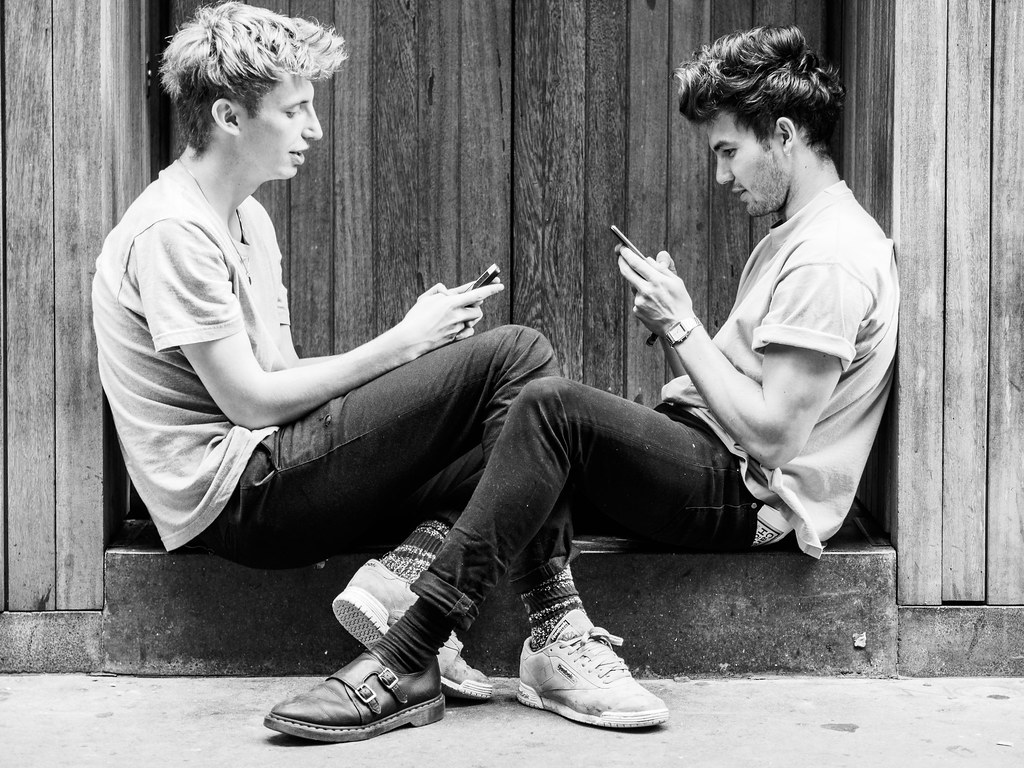 Guerrilla Usability Testing is basically an informal testing performed in real user contexts in order to obtain fast feedback about a prototype. It was defined by designer Martin Belam as, “the art of pouncing on lone people in cafes and public spaces, quickly filming them whilst they use a website for a couple of minutes.” Exchange “website” for “video game,” et voilà!

Which development phase should it be carried in?

The good thing about Guerrilla Testing is that it does not need as much time to prepare as other techniques. This makes it a very powerful tool to be used in any phase of the development with different video game maturity levels.

However, I would recommend launching a Guerrilla Test as soon as the main gameplay and physics are ready (or at least at 90%), even though users can only play one dummy level. I consider this part the core of any video game and it is important to make sure the foundations are stable before building on top of them.

What are the typical questions you should ask your users?

These are some sample questions you could ask during the Guerrilla testing. Please note you may need to adapt them depending on your video game genre:

The main attribute about on-site testing is that a person from the development team must observe and guide the process to the user testing the video game. This forces the user to go through the most critical parts inside the video game and allows someone from the team to see directly the main impediments the user has to face when interacting with the product.

If you want to make it professional and share the feedback easily, it is a great idea to record the screen your user interacts with, user’s face and even user’s environment. Putting those three videos in one single view is a very powerful tool to present the problems to your team and find ways to solve them.

If you want to know more about tools to record usability sessions consult this article.

Which development phase should it be carried in?

To make the most out of the testing process, video game should be almost finished. For example, it is okay if not all the levels are included or the assets are not the final ones. However, main screens and the whole navigation map must be implemented, along with the game play and levels structure (at least the levels you want your users to play during the testing). These elements are important enough to make people test them before validating they work well for users.

Which are the typical questions you should ask your users?

Making Users Evaluate without Them Knowing

If your budget does not allow you to spend time and resources on usability research you can still perform usability testing thanks to your video game’s beta version. Advantages are that it can reach more potential users (this means more feedback) and users can do it on their own. Furthermore, you will find answers to more general questions, like, “How long it takes for players to leave my video game?” before your product is even in the market.

Which development phase should it be carried out in?

A beta version is, by definition, a software level maturity where the final product contains all major features, but it is still not perfect. This means your team must consider your video game as Implemented, but not fully tested yet. This leaves a window open not only to bug solving but also to possible minor issues users will spot for you.

More than steps there are several techniques that can be used altogether in the beta release to measure usability. Keep reading to know how to use them!

Asking the right questions is the key technique to obtain feedback, but your users will not give you interesting observations unless you provide them something in exchange. Offer them rewards or special items if they answer some specific questions (see examples below) by just clicking in a button inside the game. You will get a high rate of your beta user responses.

Another approach is sending a programmed e-mail some weeks after the user has installed the video game. This will help you know long-term behaviors with the game, but it is easy that the message ends up in the trash or in the spam folder of your user’s in-box.

In both cases I would recommend established tools like

Typeform, it is easy to use, quite customizable and the final result is far from the old-fashioned forms some people are used to.

Surveys and questionnaires can give valuable subjective feedback, but it is also important to have a look at quantitative data based on real usage. Tools like Google Analytics can give you this… and beyond! (if you do not believe me, I invite you to start digging into this big world in my past article aboutGoogle Analytics in Video Games)

What concrete actions can you perform in Analytics to measure usability? More than you can imagine. Here there are some examples:

A Heat map is a visual representation about the areas most frequently clicked by your users on average. If you perform a heat map analysis on your video game you will see red areas (most clicked ones) around the HUD or the main interactive elements. If your video game is mobile you may even notice by the most clicked areas which fingers your users use the most and you may want to change the layout of the playing screen to avoid unreachable important areas.

There are others  out there.

How much time your users spend using your video game on average can be very helpful as well. For example, if you estimate level 1 takes one minute to complete and a high percentage of users spend less than one minute playing you may need to implement level 1 shorter or easier.

Every set of actions that describe a flow to get a goal can be tracked and analyzed afterwards. This is what Analytics calls a funnel and they can answer the question: “In which step users abandon the process?” That problematic step is what the usability improvement must be headed to. Some typical flows in video games are:

Whar are the typical questions you should ask your users?

This article presents a set of usability testing techniques that can be adapted every research you make in order to fit better your video game’s genre. Furthermore, there are others you can try and there is a great User Research community out there with whom you can share experiences and keep learning.

Big companies even share real case studies that have made them re-design part of their video games’ ecosystem:

The most important thing is not losing focus on your users. If your video game is like a product, users are like customers, and remember what they say . . . customer is always right!