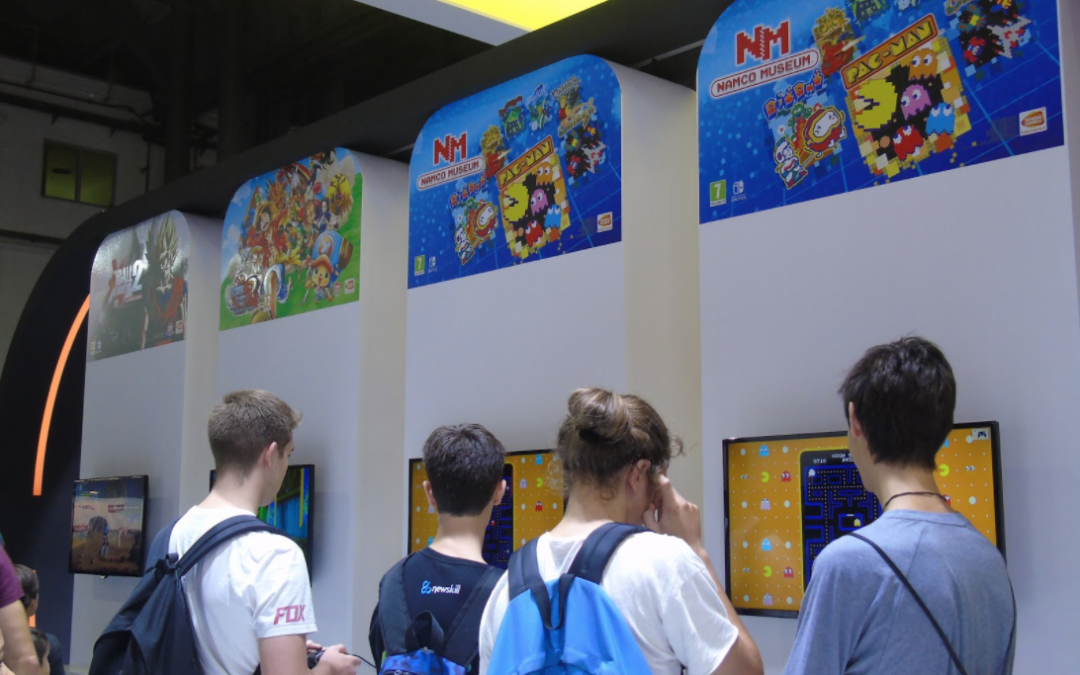 Barcelona Games World 2017, which ran between October 5th and 8th, broke all the participation records from last year, with 35% more companies and 11% higher attendance. It’s only in its the second year, but the consensus among the press is that BGW has already become the video game referral event for the country of Spain.

Below is a snapshot of some numbers for Barcelona Games World, which are quite impressive given that Spain’s population is around 45 million people. 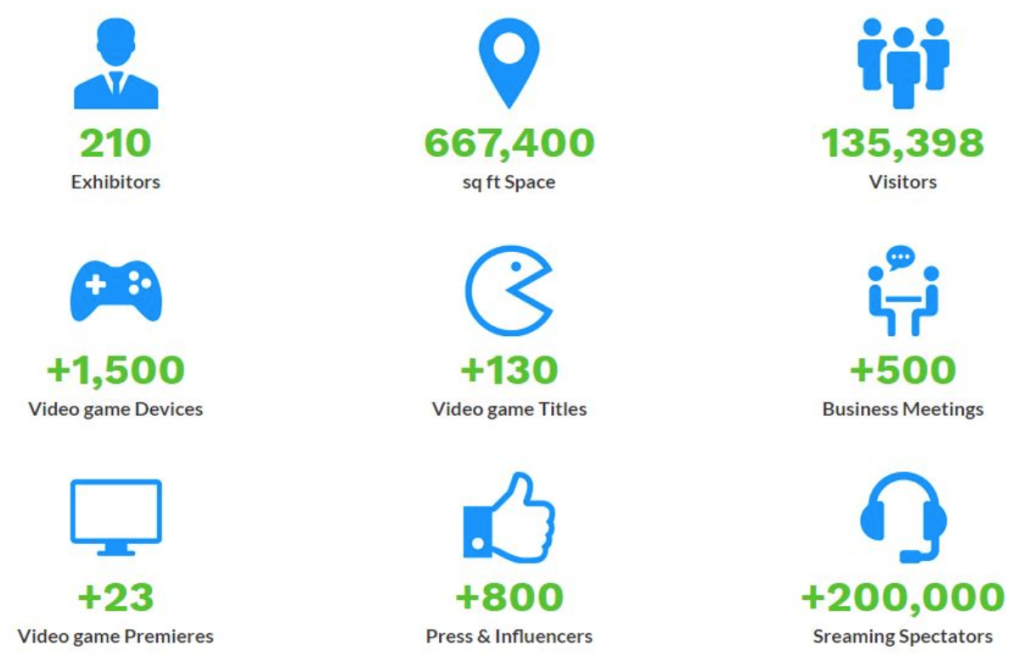 Last year we were there, so we’d be crazy to miss this year as well. A photographer friend and I got up early on Sunday morning—not normally recommended, but we made an exception here—and went through the press entry into this wonderful video game world.

Nintendo, All About that Switch

Nintendo’s cornerstone was pretty clear this year: the one-of-a-kind Nintendo Switch was everywhere. 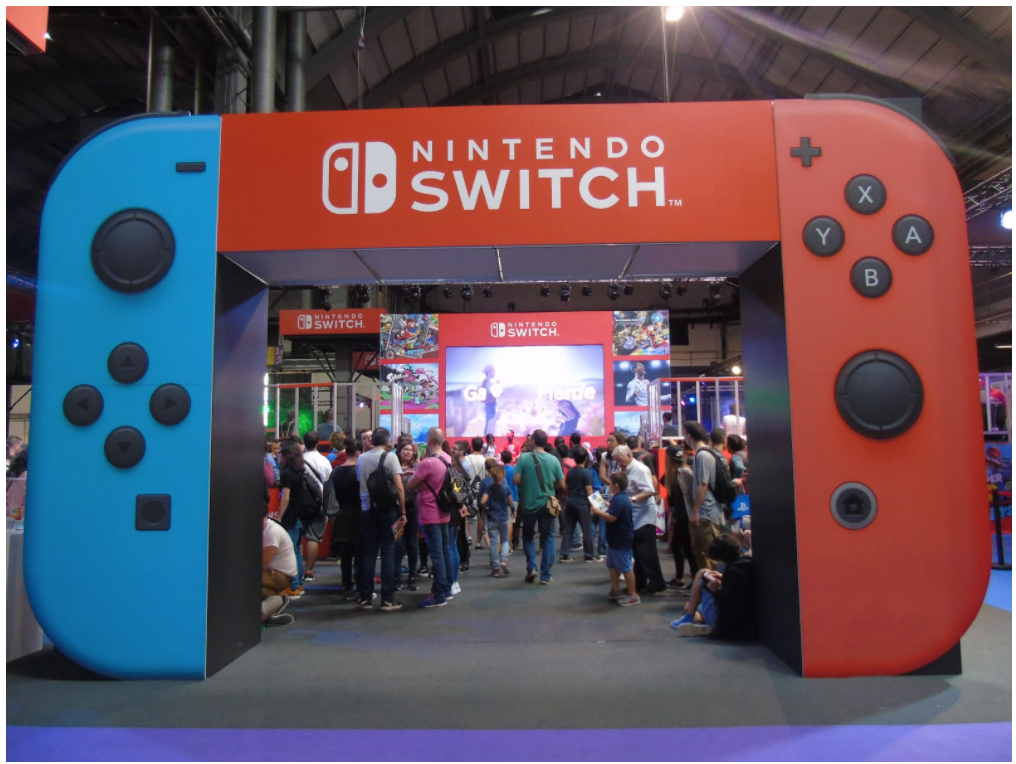 The Switch’s limited catalogue is still one of its main problems and was evidently seen in this booth where there were a lot of video games that are not that new like The Legend of Zelda: Breath of the Wild, Mario Kart Deluxe 8 and a tournament in 1-2-Switch, where the participants were quite young.

Real novelties that gathered people around big TV’s and integrated Switch screen were Fifa 18 and Super Mario Odyssey. We wanted to test the frame rate of the famous soccer video game, but sadly, the line was too long. We’re hoping Nintendo brings more devices to next year’s event. 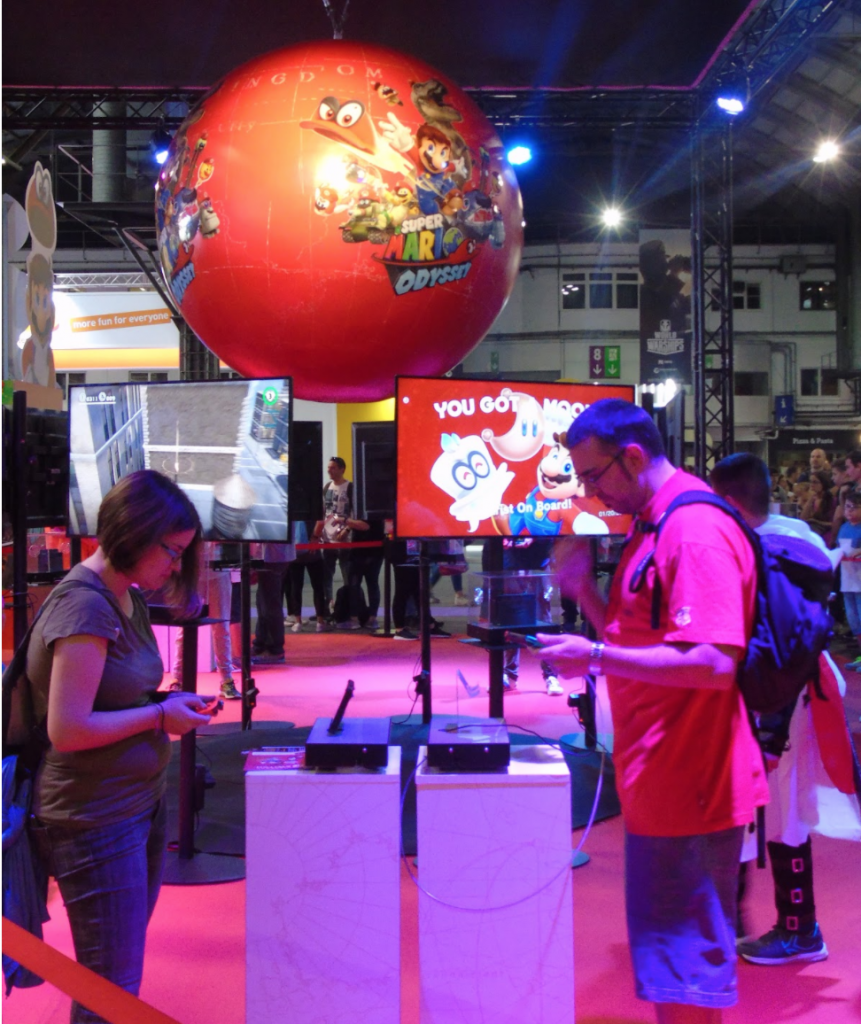 I must admit that I prefer Sony to the Mario Bros, and that is why my Nintendo video game recommendation will go to Sonic Forces—also available for PS4. I love the fact that they have not forgotten about the classic video game, and that is why the video game mixes 3D and 2D perspectives. Luckily, graphics for 2D are completely different, and the freedom and speed feeling have increased from previous releases. Some are saying it could even be the best Sonic game so far! What do you think watching this game play?

The Japanese company has significantly increased its presence from last year. From almost being in a corner in BGW 2016, in this go around, a cool arch structure advertising Ni no Kuni II: Revenant Kingdom was the most important part in the booth. We did not have the time to play this RPG, to be released for PS4 and PC next January, but we saw others playing inside the open world as Evan, the young king protagonist of the series. 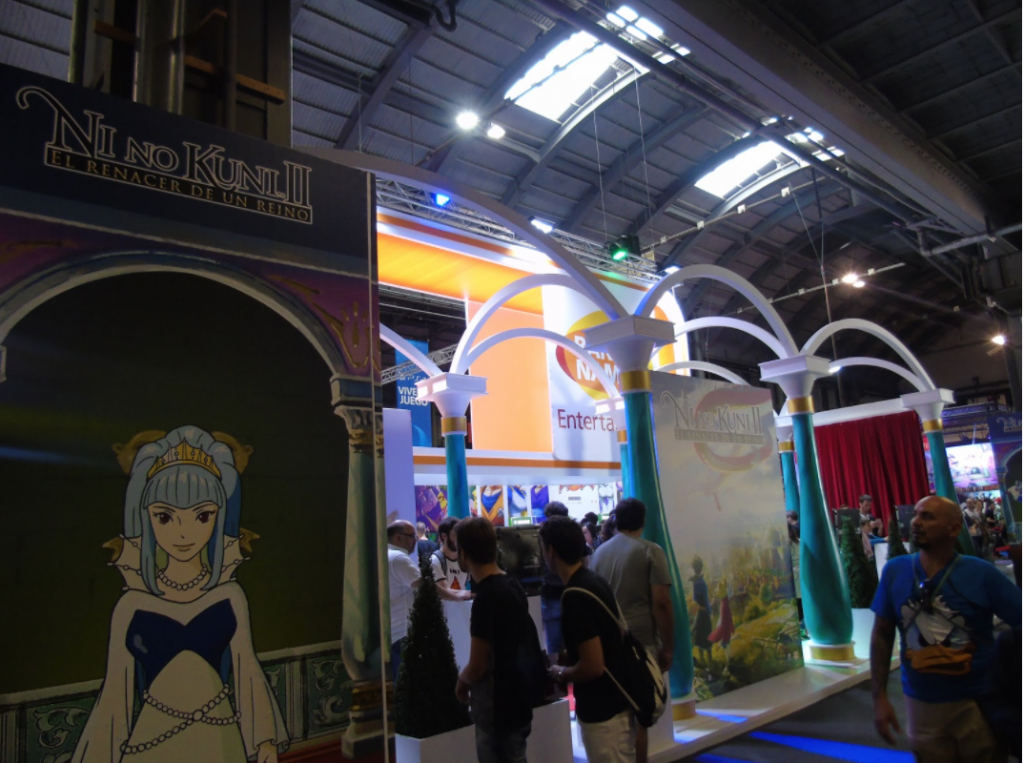 Another Bandai Namco production that was presented there and could be played was Dragon Ball FighterZ, a promising 2.5D fighting video game that people were playing in pairs.

The booth also had PS4 and XBox devices to play most popular video games this year such as MotoGP17 and Gundam Versus. As a tribute to Toru Iwatani, there was also a space to feel nostalgic and  enjoy Pac-Man.

I would definitely love another round with a game I was not originally aware of called Little Nightmares,  a puzzle-platformer horror adventure about a girl that needs to escape from a haunted house with monsters twice her size. The feeling of “something is not right,” along with graphics and sound, create a mysterious atmosphere that I absolutely love.

Available for PC, XBox 360 and PS4. Have a look at the trailer if I have not convinced you yet.

PlayStation’s booth was the biggest of all for the second year in a row. However, they repeated last year’s formula of advertising famous franchises like W2K18 in a boxing ring and NBA 2K18 in a basketball court. I had a déjà vu feeling about seeing the same places as in 2016, and I was sadly a bit disappointed: I think a big company like Sony should remain innovative. 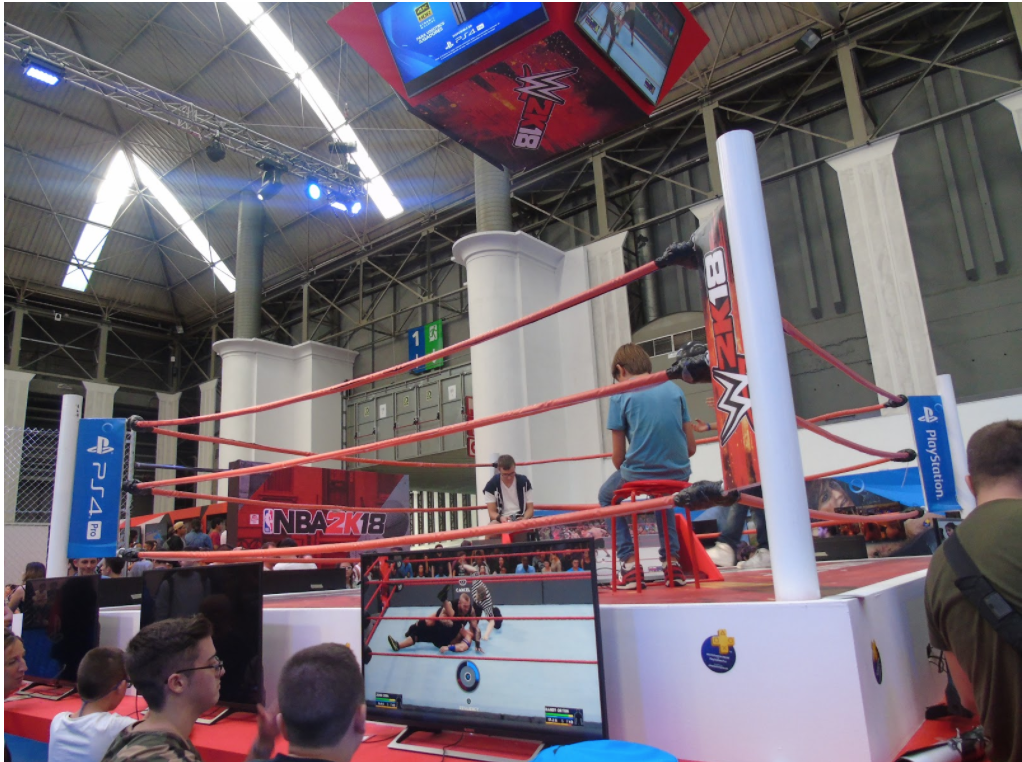 The PlayStation area met expectations regarding the number of devices available and you could play any recently launched game without long waiting lines. For the most important releases, there were specialized stands to play and to take pictures. As a Star Wars fan, I specially liked the Star Wars battlefront II one, but Call of Duty: WWII and Gran Turismo Sport were also worth watching. 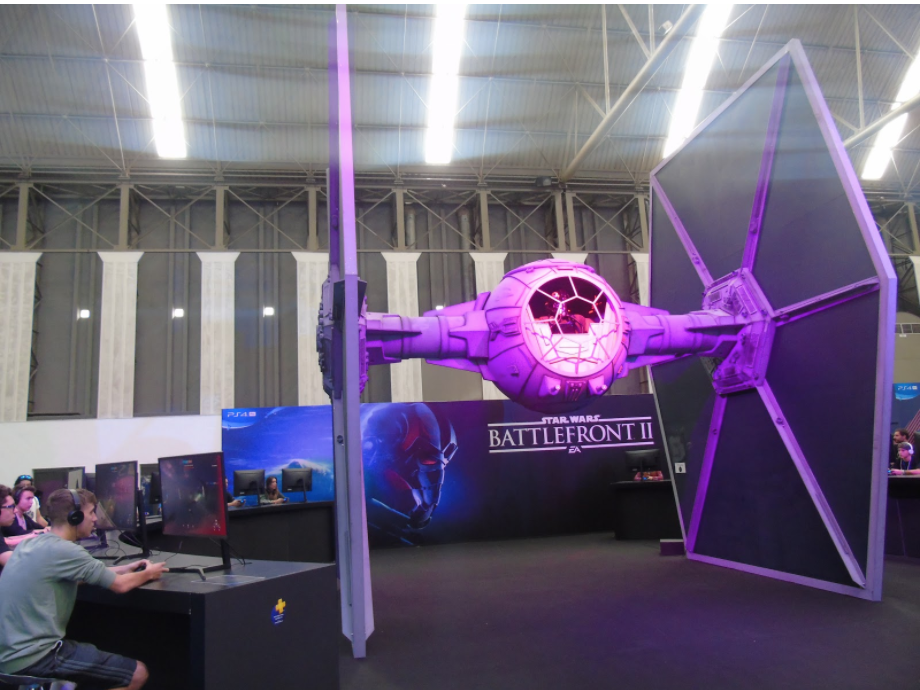 One of the surprises was the PlayStation Theater, with demos of games to be released in 2018. BGW was the only place in the world where visitors could watch gameplay for a new God of War installment, commented by Cory Barlog, creative director of Sony Computer Entertainment. We enjoyed every minute of listening about the franchise’s evolution, the relationship between Kratos and Atreus, and changes in the combat and movement caption systems.

My favorite section by far was the VR one that was pioneer this year and proves that Virtual Reality keeps growing its market. We saw interesting proposals like Spiderman: Homecoming that I think matches perfectly with the Move controllers.

However, the title that seduced me by its simplicity was CoolPaintrVR, which is still in development. The game manages to make you feel like something between a painter and a sculptor. The tool that allows you to move your creations around space is pretty responsive, and the fact that if you walk forward you can come close—or even inside—your 3D-painting is just awesome and generates zero motion sickness.

The moment you’ve been waiting for! After having a tasty hamburger from one of the food trucks in the outdoor area, we went back to the place where indie companies proudly present their creations. This is normally one of my favorite sections in BGW, as I go there without any preconceived ideas about what I will see and I end up experiencing some nice surprises.

The developers from Grimorio Games guided me through Super Hyperactive Ninja, where the main character needs to have cups of coffee in order not to lose energy. As a fan of classic platform video games I liked how fast the character can move and the fact you can add weapons increasing difficulty and possibilities each level. 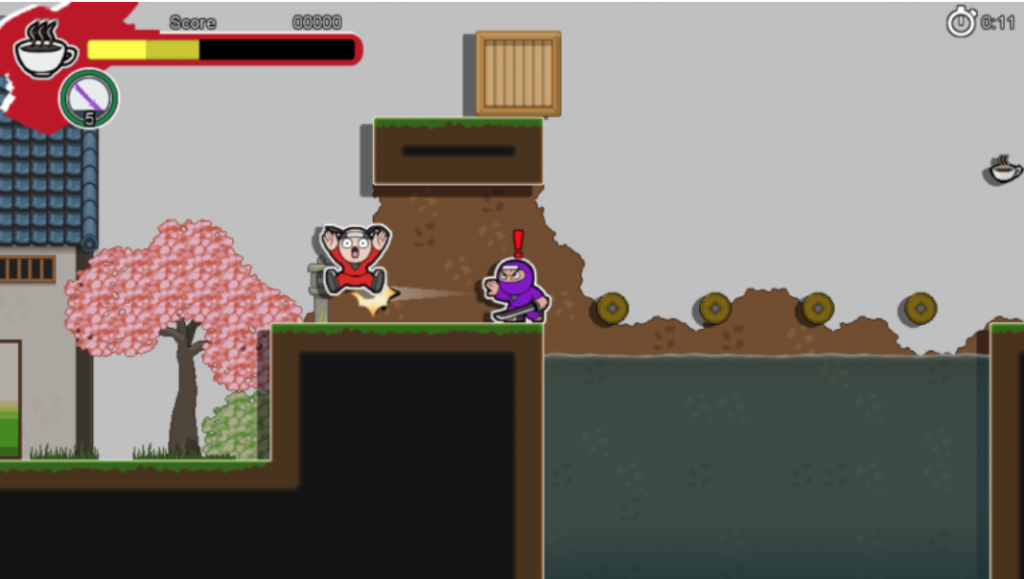 Another interesting proposal came from the PrimerFrame academy. Last year, they presented their colorful and happy Sugar Flow. However, this year, they showcased a completely different project: Recurring Nightmare, a graphical adventure inside the survival horror genre with the main mechanic of if you die inside the video game you will become the characters’ ancestor thirty three years before. This video game was one of the finalists in the PlayStation Talents Award, a competition hosted by PlayStation Spain that recognizes the best indie video games for this platform.

One video game that caught my attention thanks to its original visual appearance was Etherborn, by Altered Matter. This young team’s first project has already won the most important indie awards across the country with this beautiful dreamlike video game where gravity changes depending on the surface you are stepping on.

Watch the trailer to fall into its charm just like I did!

Mobile video games have an important slice of the video game market cake worldwide, and even though I could play some on portable devices, I still miss its presence in BGW. The game 1214 takes the mobile concept to the next level by using your own smartphone as an immersive device.

1214’s concept is simple: it’s the typical from survival horror genre where you just need to escape from a terrifying house alive—if you can. You will do most of the gameplay on your PC, but your mobile device connects to the game as well. This way, in the most intense moments, your smartphone will turn on, vibrate, or receive a call from someone INSIDE the game. How cool is that? Furthermore, the smartphone will still work when you are not in front of the PC and the actions you take will influence the game.

A Tribute to Those that Started It All

We cannot forget that during the first days of the event, the BGW organization awarded influential people inside the video game’s world.

The first one to receive the award was Toru Iwarani (Meguro, 1955), the so-called creator of Pac-man, the most successful arcade video game in history with 293,822 devices sold between 1981 and 1987.

Another great man that received his honorary award was Kazunori Yamauchi (Kashiwa, 1967), the creator of the Gran Turismo saga and current president of Polyphony Digital. Kazunori has been involved in the production of the seven Gran Turismo releases and he even presented the last one—Gran Turismo Sport—at Sony’s booth.

We felt very lucky to receive these important people’s visit, which made the absence of Bandai Namco’s founder, Masaya Nakamura, who sadly passed away at the beginning of the year, all the more notable.

Retro Barcelona was waiting for us upstairs with devices to play from the Atari 2600 to the PlayStation 2—I was surprised to see that my last console is already considered old-fashioned. The space was very similar to the past year with Mario Bros, Mario Kart, and Sonic video games all around. Those heavy arcade machines were also there being played mostly by 80s nostalgic people. You could even buy the whole catalogue for your old video console with very fair prices.

Regional universities, hardware manufacturers like NVIDIA or MSI, manga stores, and more than twenty tournaments throughout the four days the event took place completed the picture of Barcelona Games World 2017. Big lines to access the enclosure are still an issue for visitors, although it proves public interest in this kind of events.

We can only hope for BGW2018 to be bigger and better. We will be there for sure!