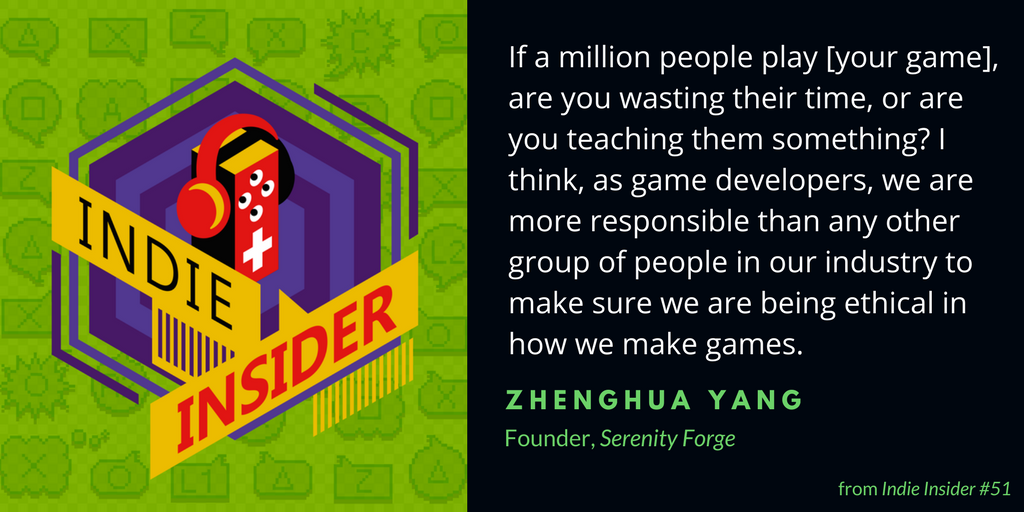 I don’t know about you, but I wish I could be more like Zhenghua Yang, this week’s guest. I can’t think of anyone more deserving of the success he has found, and we’re lucky to have leaders like him in the video game industry. He’s a giving and empathetic individual with a clear grasp on what matters in the grand scheme of things.

Which brings me to his quote: “I think, as game developers, we are more responsible than any other group of people in our industry to make sure we are being ethical in how we make games.” It’s not something I’ve ever thought about, but this strikes me as something of profound importance.

We, as game developers, have a platform by which to guide and influence (potentially) millions of gamers. This is a responsibility that we sometimes take for granted. Perhaps we get lost in trying to make ends meet, or we are so focused on mechanics that we lose sight of the story we’re telling. But at the end of the day, what are we leaving players with? Are we creating games that matter to someone? Anyone?

The only person that can answer that question is you, but I’d encourage you to take a step back from your current project and ask the question: “What will players leave my game feeling/thinking/knowing/doing?” Remember – You are a creator, and a leader. Your work matters in more ways than you may realize.

P.S. If you missed last week’s episode, we’re doing a HUGE giveaway in honor of hitting 50 episodes of the podcast. We’re giving away the Game Developer “Level Up!” Pack, which includes three books from previous guests of the show (two of them signed!), a service package from IndieGameU to help get your next game off of the ground, and I’ll even work with you to set up an interview with one of your idols on the podcast, which you can join me for! It’s a giveaway valued at almost $900, so we’re pretty excited about it!

For more information on prizes and how you can win, click here: https://gleam.io/iJynD/the-indie-insider-50th-episode-giveaway