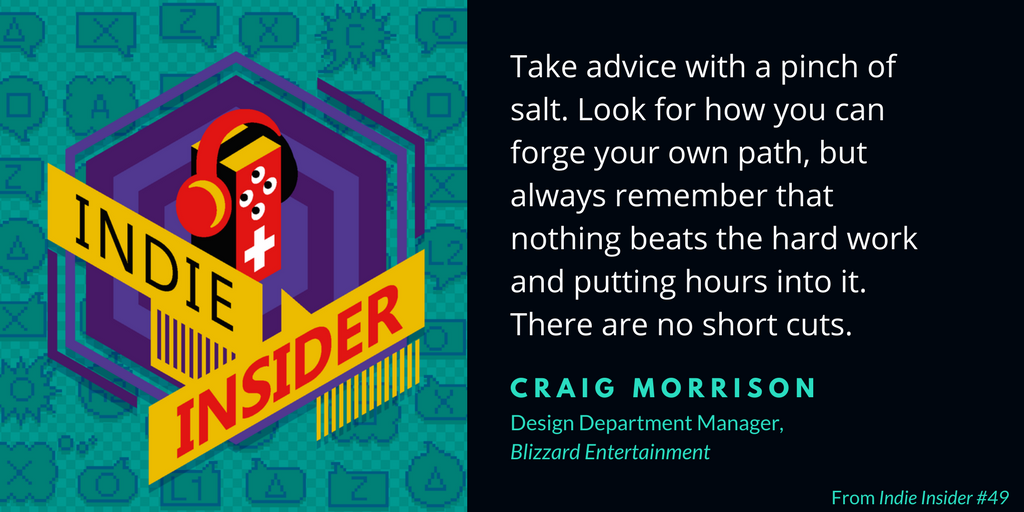 Quick plug: Please join us for next week’s episode – it’s our 50th episode spectacular! We’ll be with special guest Nolan Bushnell, founder of Atari and father of the video game industry. We’ll also be holding a giveaway valued at hundreds of dollars, visiting with previous guests of the show, and much more! It’s going to be an awesome episode, and I hope you’ll support us.

But this week, we’re talking with Craig Morrison of Blizzard Entertainment. I like to think that all of our interviews on the show have something useful or insightful to share, but some episodes are straight-up masterclasses from veterans of the industry. I assure you that Craig’s walk through of the lessons he’s learned throughout his successful and long career will have you inspired just like I was.

I’ve been thinking a lot about Craig’s (and Blizzard’s) approach to values and philosophies. It’s the same idea as Fred Wester’s pillars from last week – these are the values that define your company, your team, and your projects. Two large and successful companies utilize them in every aspect of their projects. They help keep the teams unified and the projects focused on the things that matter most.

But this isn’t always easy. Both Paradox Interactive and Blizzard Entertainment have their values/pillars physically placed somewhere on their campuses to try and keep them in mind. I plan on challenging myself and hanging something up near my desk with my pillars of value for the podcast on them. I’m also going to challenge Raghav, Daniel, and the team at Black Shell Media to do something similar.

Finally, I’m going to challenge you. It’s not enough to just think about your pillars of value. Write them down. Hang them up. Share them with your team, your family, your friends. Hold yourself accountable, and always strive to meet these pillars. It’s clearly something that works for titans of the industry, and I’m willing to bet it might just work for you too.

P.S. If you do write them down or hang them up, shoot me a picture! I’d love to see what you all are doing. Email: [email protected].