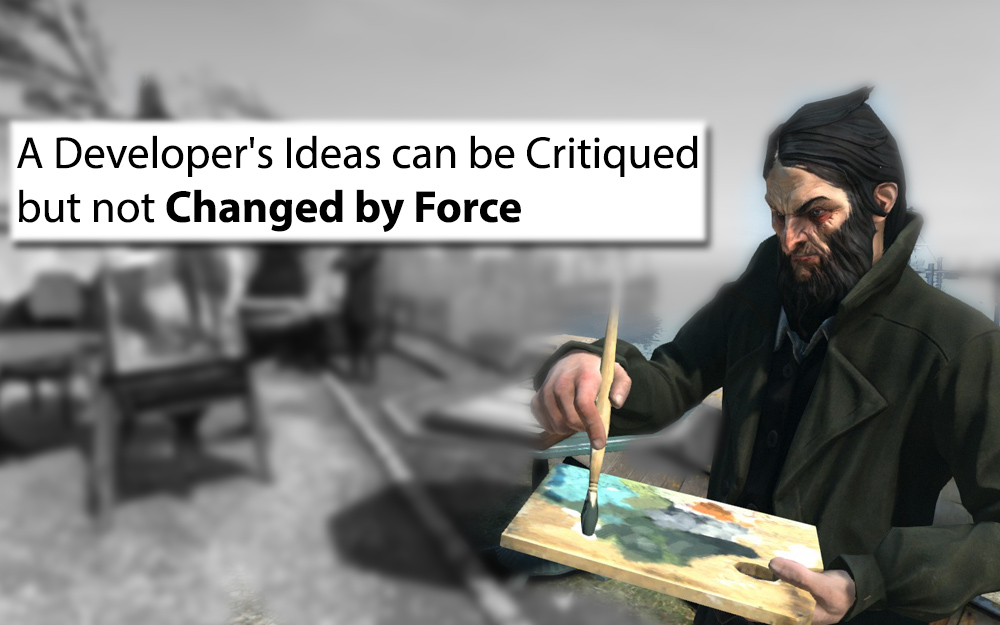 To many people, developing a video game is the same as creating art. No one would go up to Edvard Munch and ask them to repaint The Scream because it was too wavy. Same thing often applies to a game. A developer has total creative control (aside from the usual publisher intervention, which is dependent on what game we are talking about whether big company or a small game in the indie community). The developer is boss. Everything you see within a game has had thought put into it—and not just broad sections of a game but basically every pixel. In my experience in video editing, the same thing applies to a video production. Every frame has had consideration and thought put into it.

Edvard Munch was an artist of Expressionism, Symbolism, and a pioneer of modern art.

The Creator is in Control

It’s never a dull moment when I see a developer hounded online as to the design of their own creations. As much as gaming is a form of escapism, developing a game can be a similar process. A developer pours their ideas, imagination, and heart into a project and doesn’t deserve having people going beyond standard critique and pressuring or even shaming them into changing what they created. The gaming market is gigantic and there is something for everyone to play and enjoy; games people do not like can of course be criticized but going as far as to dictate what people can and can’t create is taking things to an extreme.

Based on public reception, a developer will get an idea of how to change or modify their creation depending on how they want their game to succeed or whether or not to target a certain audience. This can depend on genre or game content, or whether it’s a family friendly game or a game for mature audiences. The limit of what is created will ultimately be dictated by general classification guidelines so as long as ideas fit in those boundaries a developer can have free reign. This enters a realm of other topics regarding violence in games and how certain aspects of games might be seen as cruel or tasteless. However, what is important is that a developer can create what they like. Once that game is up for purchase or being spread through beta phases, a developer will get a rough idea of how to approach their next steps upon their game release.

Game ideas can vary and indeed have varied over the years. A developer can approach an idea and it can be either based on realistic themes or be extremely abstract and fresh for the games industry. Sometimes those ideas might get misunderstood by part of the general gaming community and some might even go to an extreme and start calling for changes to your game based on personal taste or be offended by certain aspects. On other occasions, some developers may go all out and ignore everyone to push an idea onto the market, Hatred is a prime example of such a game: an extremely violent twin stick shooter that closely mimics themes related to mass shootings. This game was not the best gameplay-wise but its marketing was a big surprise. Due to its content & visuals, it was talked about by many people.

Hatred was a game that was mostly panned as mediocre but it was one of the most talked about games of the 2015.

Dragon’s Crown is a brilliant example of a game in which every aspect is an exaggeration of what you would typically expect of reality. Characters both female and male have exaggerated features and abilities, cleavage, height, muscle mass, dialogue, and even fashion. Some critics were not happy with this, and due to personal preference as to what characters “should” look like, some labelled the game sexist and demeaning to either female or males depending on the argument. However this kind of reception only should act as more information to give a developer an idea of how to proceed in the future, whether they want to change how their game is presented or not. Having a developer change features through petition or via others shaming them for their creation should not be happening. This is when it goes above the standard critique and is really just disappointing, because it’s a developer’s right to create and present what they intend at their own discretion. In other words, we’re all in this to make money, but think twice before selling out.

Dragon’s Crown – Sometimes artists simply want to exaggerate features in character design, instead of keeping close to realistic forms. Just because something like this doesn’t agree with everyone who views it, does not make it wrong for being created.

The important thing to take away from here is that even if a game has abstract and risqué ideas, it still needs to have substance. Gameplay, sound design, presentation, and many other things come into play. No matter how wacky your game is, you as a developer still need to mold that wacky idea into something that your intended audience appreciates. This comes into play with creator control, since the developer is the one in control: you have the ability to make informed decisions about where development leads, and analyzing public reception is a major part in this. An example of an informed decision is a situation where your entire intended target audience dislikes your idea. Then it would be clear that something needs to be changed, but this is ultimately a choice as a developer. Either you decide to cater to the public and what they request or you continue with your own design and try to sell people on what was originally intended.