7 Reasons Why Your Game Isn’t Selling

Scenario: your game is done, and it’s been launched and marketed. It’s available for purchase on platforms like Steam and itch.io—maybe even console if you’re a lucky indie development studio. And yet . . .

What’s going on?! Surely, there wasn’t enough marketing. Maybe the messaging is off. Maybe you’ve developed a niche game that requires extreme focus on a specific target audience only and you’ve missed the margin.

While all of these guesses cover some of the common reasons why game sales can be on the low-end, they leave out some crucial reality checks. Sometimes, and brace yourself for impact here, sometimes . . . it really is just your game.

Players are very particular about what they like, but even more so about what they despise. Things like price gouging and shady business tactics, for instance. Or the recent trend of treating your game like this ever-changing experiment, rather than a finished product.

So, to make your life easier, here are the seven deadly sins that will surely doom your game before it even sees the light of day:

Starting with the obvious, no one likes a bad review. And players do read them prior to purchasing games. Just as someone might read an Amazon review before purchasing a home appliance, or record player, players read up on the pros and cons of video games. As such, if the reviews are unfavorable, it raises a red flag.

It’s one thing to get one or two bad reviews, but when most reviews are saying negative things, then be ready for sales to be low. The gamble is just too high. Players will prefer to spend their hard-earned money on the games with favorable reviews.

On the up side, if your game still strikes them with interest, they may circle back around when your game goes on sale, which it will soon if sales are low.

This is going to sound awful, but it’s not, so reserve your judgement for a split second: some games just look like they’re bound to be free at some point. Again, that’s not a bad thing. One such game is Lovers In A Dangerous Spacetime which came out in September of 2015. After being out for a little over a year on Steam, the game became free for PlayStation Plus members.

So a game that sells for $14.99 was suddenly free for select people on a specific platform.

It sounds good for the players, but what about the developers? Well, if you have a hot game everyone wants, you don’t need PlayStation Plus, but if your game has been out for a while, and you need a revenue boost, you can negotiate a contract with Sony, make it available for free on PS+, and get free promotion. It’s that promotion that makes it worthwhile.

Notice though, few AAA games make it to PS+. That’s because they tend to have a longer lifespan, and they tend to sell more copies than the average indie game. It’s just how things go.

So, if your indie game looks like it’s eventually going to be free at some point through PS+, expect moderate sales upfront. They may go up while on PS+ due to promotion. 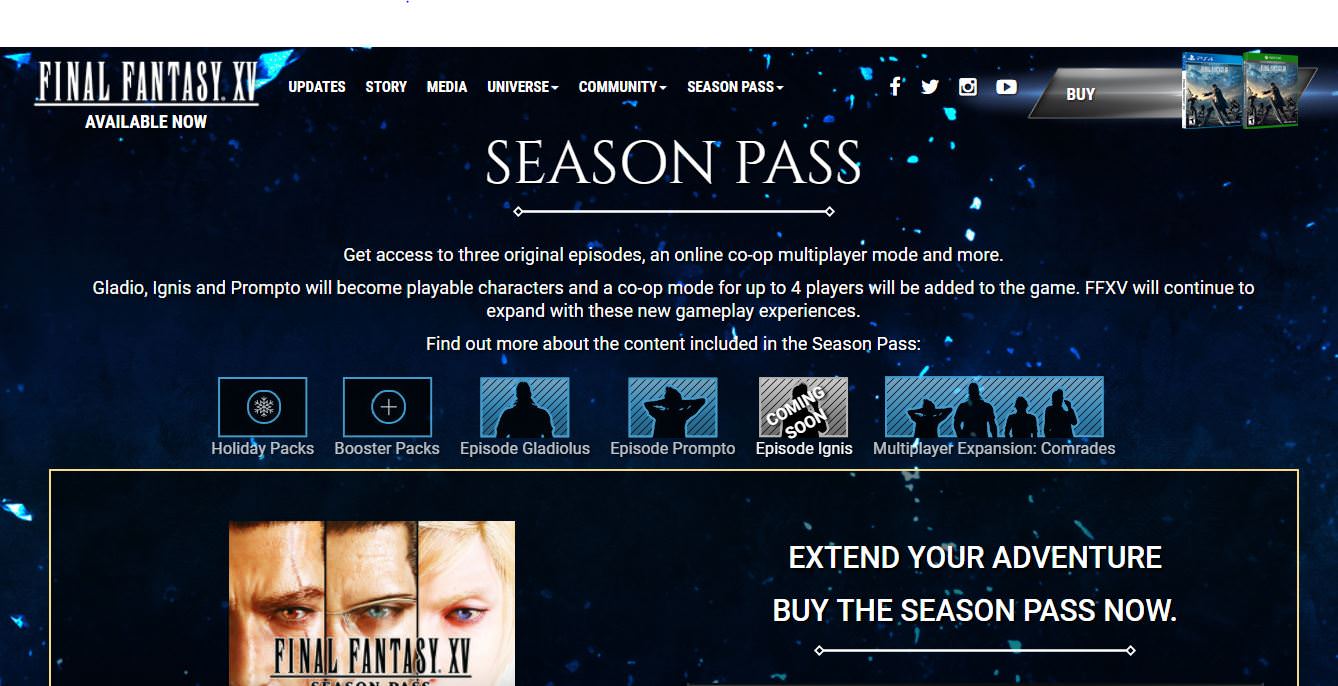 FFXV has changed more times than a teenager going through puberty. The game that was first launched is no longer in existence: it’s now a completely different game. More so, it now features a season pass, so it’s DLC-supported. So much content is locked behind that season pass that it’s arguably a straight up scam at this point. Any player that picks up the game in store has to purchase the season pass to essentially get the full game experience. That means it’s $60 for the game, plus $25 for the pass. The complete game is $85 and this isn’t even a Collector’s Edition or anything.

Honestly, when a game hits the digital/physical shelves, it needs to be done. It needs to be in its final form. There is no excuse to rely on DLC to make the game playable, and worse, to charge extra for the other half of the game. Players are becoming very vocal about this, and unless developers go out of their way to eliminate revenue models that affect game design and gameplay, the industry is doomed.

Here’s a fun fact: that whole thing about leaving the past in the past doesn’t apply to gaming. The motto can be thrown out the window as far as players are concerned. And the reason is quite legitimate: whatever you’ve released in the past lets them know what to expect from you as a developer. So for instance, Blizzard is known for grindy games with a specific style of graphics, the use of comedy or pop culture references, and demonic names (Diablo, Azmodan, C’thun, which is Lovecraftian, actually). Players know what to expect from Blizzard.

So say you’ve released two indie games in a series, and are ready to release a third. If sales are low, that means players know from the previous two games that they don’t really care for a third installment. And the reasons could be anything. It could be that the story took a turn for the worse, the gameplay isn’t memorable, the combat system is broken, the series got boring and should have been made into a singular game, etc..

5)Too Similar to Something Else Better

Battleborn tried competing with Overwatch, and well . . . Let’s just say game promotion got a bit desperate there for some time.

If your game launches and it’s too similar to something else out there, it’s directly competing for sales. That’s just how it goes, much like when two pastry shops open on the same street, or two new phone models come out. People want to know the pros and cons of each before making a choice, as they’re likely just getting the best of the two. Why settle for the version of something that’s decent, when you can get the really, really good one that everyone else is getting?

As such, you have two options: launch it and brace yourself (because hopefully yours is the better one), or time it so it doesn’t come out around that time. If that means shelving a project and learning from the competitor’s mistakes, so be it. Use that time to make changes and improvements. Apply lessons learned from their launch, and then launch your game once theirs has died down.

Notice, this isn’t entirely feasible for everyone. There are many indie developers that need to make money from their games in order to even begin another. Holding off may not be an option for you, so always strive to make every single one of your games into the best it can possibly be.

When Call Of Duty: Modern Warfare Remastered first launched, it was the COD that everyone wanted to play. Unfortunately, even Activision knew that the same could not be said of Call of Duty: Infinite Warfare. To ensure the latter still sold copies, they bundled the two games and sold them. Basically you could get the remastered game for $20, if you were willing to drop $60 on Infinite Warfare. There was no other way to buy it.

Then they even launched DLC: extra maps and micro-transactions in a remastered version of a nearly-decade-old game.

Now you can purchase the remaster standalone, but it runs at $39.99.

If you’re going to put out a game no one wants to buy, and then entice people to buy it by remastering a game they did enjoy, you’re essentially just finding a way to not lose money on a failed project. It doesn’t make it any better, it makes it a blatant disrespect to the hands that feed you.

The Last Guardian got stuck in retro development, and while it’s a great game, it should have been out a decade ago. It would have had a bigger impact back then. Playing it now, it feels dated. It has a retro feel that would have been better suited during the time that it was first announced.

But that’s just one example. Development hell is quite common. Mass Effect Andromeda was delayed too, but that extra time to fix bugs still didn’t bode well for Bioware. It wasn’t enough time, because once it launched, it was clear the game had major issues. Another was the failed game Spore, which was first announced in 2000 yet released in 2008.

When games get delayed, it means there’s some shaky ground behind the scenes. Either developers are still fixing bugs, or they’re scrambling to finish a million things before deadline and failing epically. It just has a bad connotation. When we hear “delays,” we think traffic hassles, waiting at airports, problems.

While it is entirely possible for games to be pushed back and result in amazing masterpieces with high sales, it’s more common for games to prove the wait wasn’t worth it.

So, manage your time, set reasonable expectations and goals, and most of all, give yourself some wiggle room. The players will thank you for it!

If you enjoyed this article, don’t hesitate to retweet! You can find BSM’s Twitter here.