Indie Insider #50 – Nolan Bushnell, Founder of Atari (and a Giveaway!) 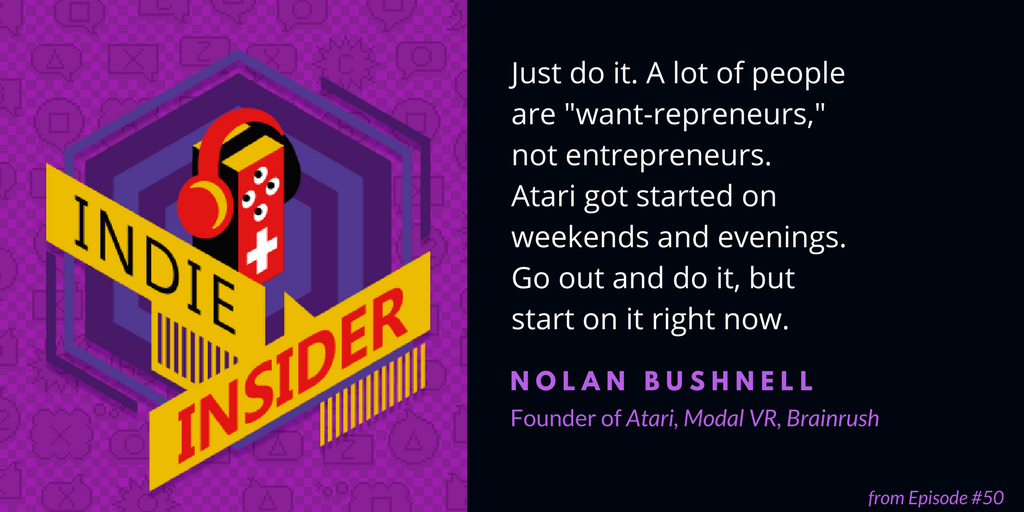 Guest: Nolan Bushnell, Founder of Atari and father of the video game industry. Nolan Bushnell has also co-founded companies such as Modal VR and Brainrush.

Before I get all nostalgic about 50 episodes of Indie Insider, let me give you the juicy giveaway details. In honor of 50 episodes, we’re giving away the Game Developer “Level Up!” Pack, which includes three books from previous guests of the show (two of them signed!), a service package from IndieGameU to help get your next game off of the ground, and I’ll even work with you to set up an interview with one of your idols on the podcast, which you can join me for! It’s a giveaway valued at almost $900, so we’re pretty excited about it!

For more information on prizes and how you can win, click here: https://gleam.io/iJynD/the-indie-insider-50th-episode-giveaway

There are many things that I still find difficult to believe. I find it difficult to believe that we’ve recorded 50 episodes of the Indie Insider Podcast, and that I’ve been working on this show for almost a year. I find it insane that I had the chance to go one-on-one with Nolan Bushnell, one of my idols. I still can’t believe that this show I’ve created, or the interviews I’ve conducted, are worthy of the listenership that is growing around this podcast.

I still struggle with imposter syndrome. I feel inadequate compared to most of the amazing people who come on this show. There are definitely some times when I feel like I should just cut my losses and give up.

But then someone like Nolan Bushnell comes along and shares his advice: “Go out and do it, but start on it right now.” If I don’t push through my fears and inadequacies now, I never will. I’ve learned by doing, and I’ll continue to do so. And I hope you all will bear with me for the next 50 episodes. I still find it difficult to believe, but I’m beginning to.

And finally, I hope you all will do the same. You hear it often on this show, but that’s because it’s true: “Just do it.” You’re probably always going to struggle with fear, with feeling unworthy. But do it anyway, and learn by doing. Make your game now. Take that next step you’ve been thinking about now.

And eventually, you’ll come to believe it.