Are Distributors the New Publishers? 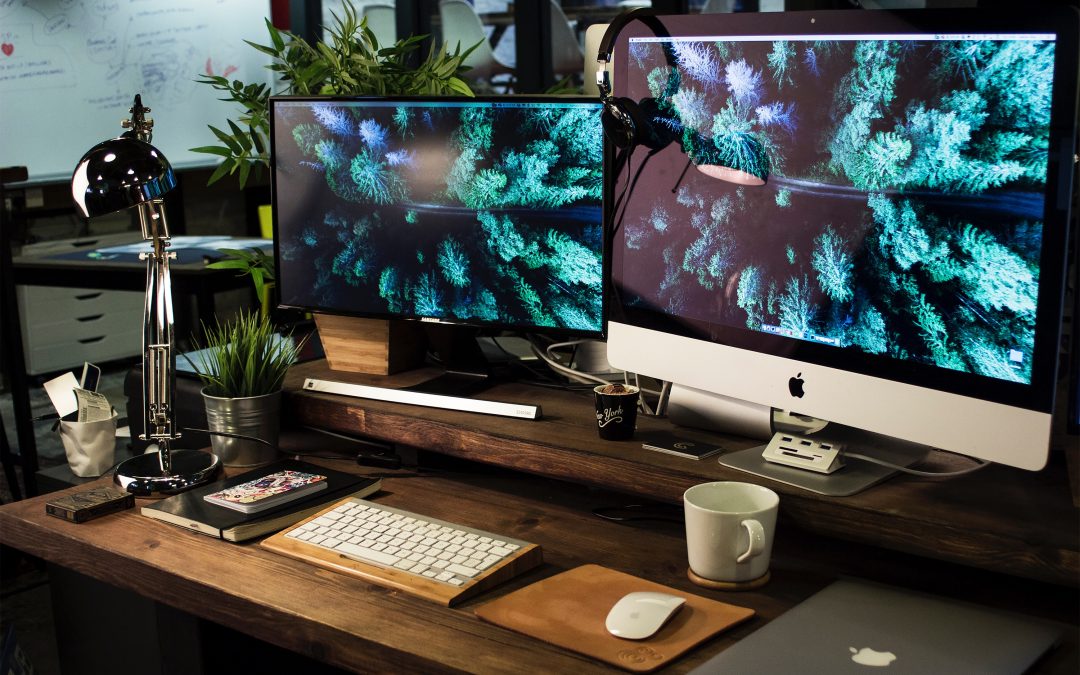 There is always something going on in the video game industry, and constant change is one of them. As such, the roles of journalists, developers, and players have all been altered in one way or another and will continue to change.

But the roles that have changed the most are those of distributors and publishers. Once upon a time, developers had to rely on publishers for a lot more. Not just funding and marketing, but also the actual availability of their games. These days, it’s anything but.

This has led many to wonder why publishers are still relevant today and if it’s even something they should consider looking into. Perhaps digital platforms like Steam and the iTunes App Store are all you need?

Since most indie games are distributed digitally, let’s focus on that. This form of distribution involves delivering a video game without the exchange or purchase of new physical media. It’s skyrocketed in popularity since the early 2000s, when network advancements reached a whole new level.

These days, platforms like Origin, Steam, GOG, and others are prime examples of distributors. They do not market your game, they do not fund your game, and they do not give you any tips on what to do with your social media, blog, or community. They simply allow you to sell your game on their platforms. Some even serve as digital rights management systems, limiting what players can do with game copies (i.e. limiting them to one account).

To summarize it all into its simplest form, publishers pay for the development process as well as the marketing of the software. But distributors are the ones who purchase that software and decide where to sell it, and how. They may even manufacture the media itself.

In other words, publishers used to be the only line of approval for a developer, but now there are two, and they each have their own objectives. Distribution platforms are available to anyone, developer or publisher, and can be used as a tool. There is no loss of freedom, but definitely a certain standard set in place by each platform. As for publishers, they’re not really so much tools as they are potential partners. After all, more often than not, they’re the ones doing everything you don’t have time to do yourself.

According to SuperData, worldwide digital revenue was $7.7 billion in April 2017. This is a 9 percent increase from April 2016, leading many industry leaders to believe that this is going to continue increasing each year.

This stands in stark contrast to physical game sales, which have been steadily declining since 2010, as seen on the Ars Technica graph below: 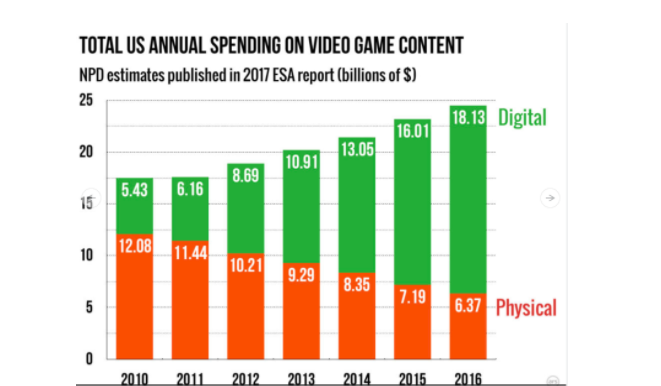 In a matter of six years, game sales have gone from two-thirds physical to about three-quarters digital. And physical game sales today are still lower than what digital game sales used to be. This explains why stores like Best Buy have low inventory of available games (new releases are up at the registers in limited quantities, and out on the floor, it’s just older games). It also explains why GameStop is now an explosion of video game apparel and toys. Suddenly, their acquisition of ThinkGeek makes more sense.

Meanwhile, distributors such as Steam are seeing major profits. There are 125 million users on Steam alone, and well over 10,000 games. This, of course, is bound to change with the new updates Steam has been implementing since last year, and now even moreso that Greenlight has been eliminated. Despite the fact that only time will tell how it fairs, it’s still the most popular digital marketplace for games worldwide.

But just because plenty of developers are asking if they need publishers, it doesn’t mean they aren’t choosing to work with them. Electronic Arts, Square Enix, Nintendo, and Sony are the top four AAA publishers today. These publishers are known for high game review ratings and player feedback. Although there are some flaws, especially in regards to EA’s love of microtransactions, it still hasn’t stopped them from ranking higher than some of their other counterparts.

On the indie front, there’s Indie Game Girl, Games Brief, Whippering, Steak Steak, and us of course—Black Shell Media. Even the iconic Adult Swim Games is making waves these days.

For reference, here is a longer list of indie game publishers that work with Steam.

Self-Publishing Can Be Valuable

Assuming you’re self-publishing with the aid of different services, there is plenty of valuable potential. This is something that publishers did a decade or two ago, so it has all come full circle.

In the words of Debbie Bestwick from Team 17, a leading indie developer and digital publisher:

“Publishing partners do all the stuff, like QA and marketing, that gets in the way of making the game.”

It’s not enough to put your game on Steam and expect to have all the marketing done for you. That used to be the case, back when Steam hadn’t quite grown to the extent it has now. Putting a game up on Kickstarter and hoping someone finds you isn’t enough either. That’s not to say that internet fame and fandom are not in your future, it just means there is plenty of competition to be found, and getting picked by an influential YouTuber isn’t something to rely on anymore.

If you want exposure, if you want community engagement, you have to either take matters into your own hands, or have a publisher take care of it for you. And doing it all yourself requires time and energy spent away from the actual game development process.

Assuming you have the time, or are hiring a freelancer/contractor to take care of it all so you don’t have to work with a publisher, there is potential to keep more profits, creative freedom, and peace of mind. As we’ve explained before, you can do whatever you want with it, market it however you want to, and avoid dealing with any external direction that you might not be all too fond of. This limitless creativity and freedom means you’re the boss, and you get to experiment with crazy ideas that established game publishers wouldn’t risk investing in.

Assuming you want to self-publish, there are a few resources to look into. After all, self-publishing doesn’t mean you’re undertaking everything by yourself. It means you’re making use of other resources available to you, without relinquishing any control.

All of this means one thing: the role of modern indie publishers has changed dramatically. These days, publishers make a great choice if a developer is looking for funding, marketing, graphics, etc. They can even help find you a team, if you’re a solo developer with few connections.

So basically, modern indie publishers are marketing experts, easy to contact, and well-connected. There is a bigger potential of earning more money in the long term. What might seem like a painful investment upfront has the possibility of a great ROI, but of course, that all depends on your game.

And while the benefits of working with a publisher are huge, not everyone qualifies. Remember, they can back out whenever they want, leaving you without funding. To prevent that, and have an overall easier time finding a publisher, it’s important to understand what it is they’re looking for.

Andy Payne from Mastertronic, a publisher and distributor founded in 1983, which later on went to merge with Sega, sought to shed light on the matter:

He also explained the objectives that both game developers and publishers should be aiming for when working together:

“They shouldn’t, or—more accurately—they needn’t. A ‘publisher’ is many things to many people, and with that role comes not only rights, as was always the case, but responsibilities. A publisher has to be part of the creative team and above all must respect the game creators and the creative process. Oh, and they really need to make sure that sales are increased to pay for their revenue cut at least.”

If you don’t see yourself working with a publisher and incorporating them in the creative process, you’re better off working alone. Also, don’t assume that hiring a publisher will make your game better—you’re the only one who can do that.

More so, be honest about your skills. Knowing how to draw, render, and code doesn’t mean you know how to market a game. It might not always work out the way you hoped it would. A traditional publisher knows how to do the things you can’t, and they have the connections and experience from doing these things on a daily basis.

Truth be told, distributors and publishers are both in high demand, but in very different ways. Developers who need help with their funding, marketing, and networking are better off considering publishers. But those looking to sell their game on many platforms, or a single, massive one, are just fine looking into distributors. Especially if they’re looking into digital rights management systems.

That means it’s a lot like comparing apples and oranges. Distributors aren’t the new publishers, they are simply the ones that have taken one duty from publishers. Publishers don’t have to worry about distribution these days because there are so many options available. Essentially, distributing platforms are a tool that publishers use any given day.

Ultimately, it all boils down to what you need/want, and who can meet those demands appropriately. If you feel like sacrificing some level of creative freedom in exchange for marketing and funding, publishers are there to help. Just remember, they can back out at any time. They will only invest if there is potential for return, but once they invest, they are looking to put you through the motions of running a business.

If you’ve enjoyed reading this article, retweet it! And don’t be a stranger, we love making new friends here at Black Shell Media.