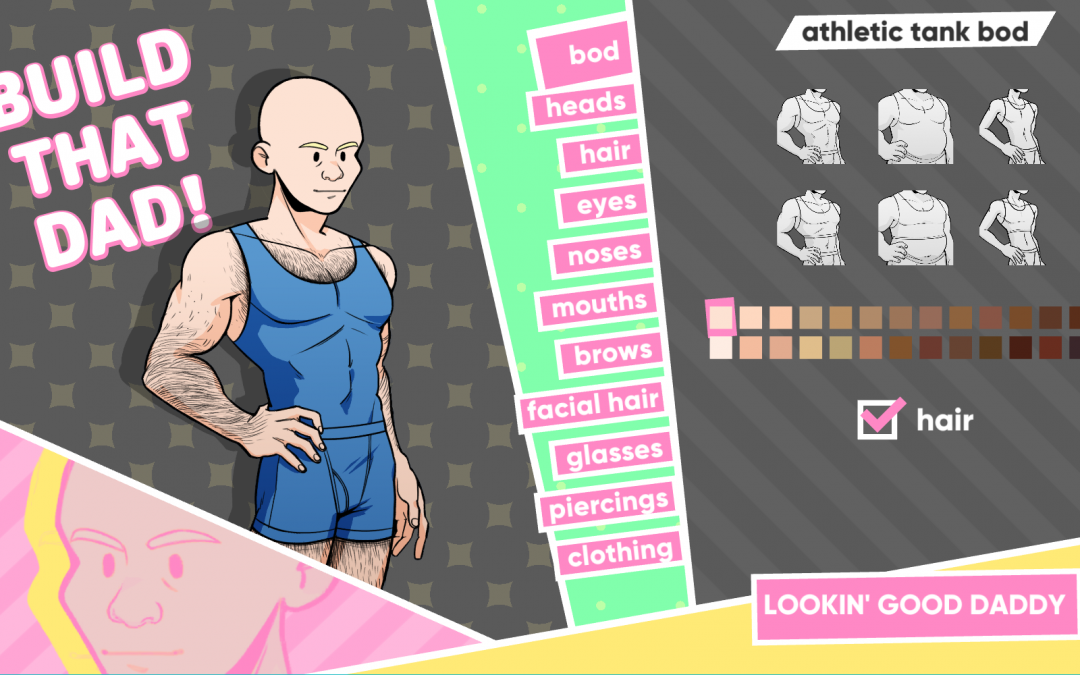 I remember being about thirteen and playing the third expansion pack for The Sims, titled The Sims: Hot Date. It had come out a few years before, but I’d been too young to be truly interested. However, teenage me, who kept falling for a new boy each week, was suddenly intrigued by dating sims.

All the drama of having a job and a relationship to balance was addicting back then. It was something about the reality of it all, about leading this adult lifestyle in a game, that piqued my interest. Suddenly, I wasn’t just in 8th or 9th grade anymore, I was this other person who shopped at amazing downtown stores and went on these dates with cute fictional boys.

But why am I telling you this? Because as time went by, dating simulators got stale, and life as an actual adult got in the way. Suddenly, these games weren’t as much fun, and definitely weren’t at the same caliber as, say any single-player game on console.

Well, a new dating simulator came out. Dream Daddy: A Dad Dating Simulator. And I am once again that 13-year old girl. If I’ve learned anything in the gameplay so far, it’s that quirky hooks really can become the basis of a fantastic, memorable, and perfectly serious game, as long as it’s paired with exceptional gameplay.

Here’s what I mean.

Upon starting up the game, it was like an explosion of pastel colors and shapes had thrown up on my screen. There was boy band music playing, and the sounds from every click of my mouse were echoed with a soft, muted, pleasant chime. The overall style was what I would have expected from a sim, only made to stand out.

Clearly, Game Grumps had one objective: throw out the handbook but keep a few pages. Add in just enough of what is essential to a dating sim, but be completely original with it all.

Suddenly, those girly 80s transitions made sense. The elevator music while creating my dream daddy seemed more immersive than ever,  and my entire perspective began to change. It wasn’t just another dating sim, and it certainly wasn’t The Sims: Hot Date. There was none of that bird’s eye view nonsense, none of that interaction with the game world, no.

And it wasn’t anything seedy either. It wasn’t a virtual partner, nor an anime-girl-filled explosion. It was . . . similar to the mobile dating sim Episode, where the player gets to choose how a story plays out. The dialogue-driven storyline, the lack of game world interaction, the pop culture references and realistic dialogue. 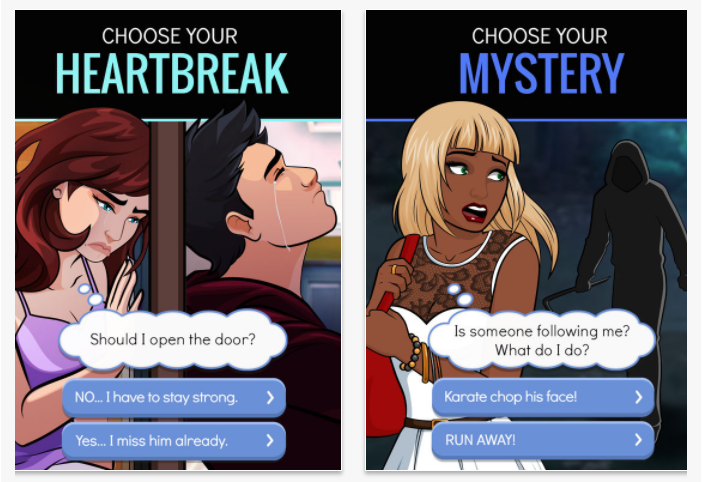 In a matter of minutes, I had been completely converted. Sure, I’d been excited to play the game from the get-go, but I hadn’t taken it seriously. I mean, a game where you’re a hot dad who romances other hot dads? Come on, that’s quirky! There’s no way the gaming industry would look at the game and think, “This is revolutionary. We have to learn from this.”

But by the time I was done creating a character and finished the first chapter, I was hopelessly addicted. 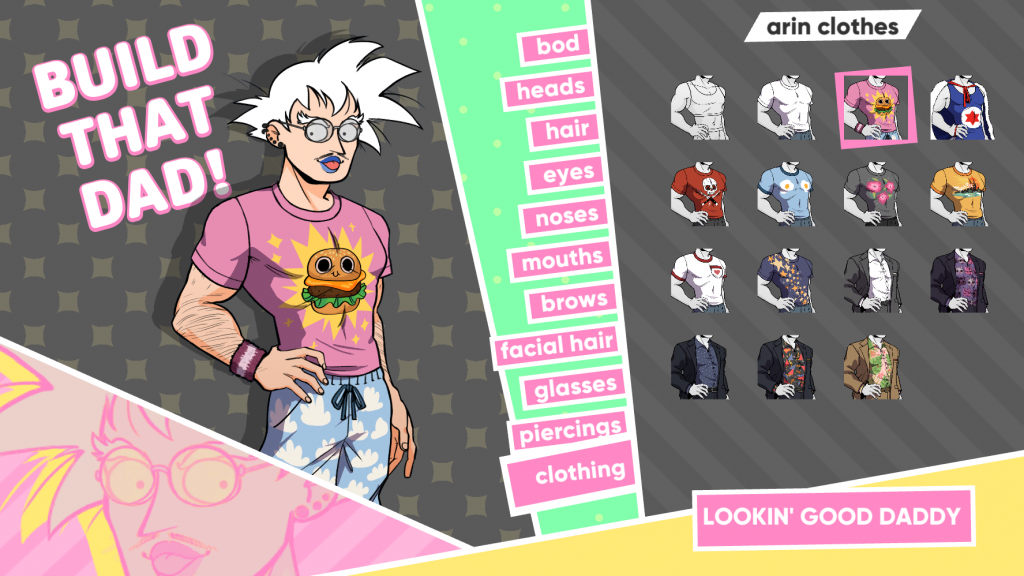 I began to notice things I hadn’t caught onto before. For instance, when the characters talk, they write in ellipses where the pauses are, but . . . each of the pauses adds an element of realistic pondering at just the right time. They were used to poke fun, to emphasize awkwardness, and even to add in a dose of sentimentality between the main character and his daughter. 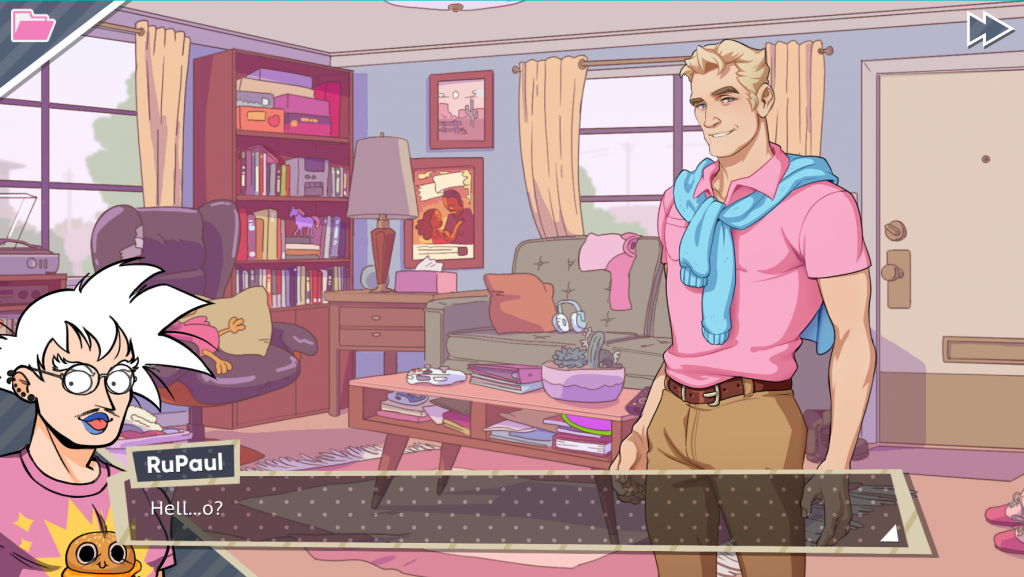 But that wasn’t all. There were a variety of references, from the Tegan and Sara gay reference, to the Biggie Smalls (R.I.P. Biggie, stay Notorious) coffee. 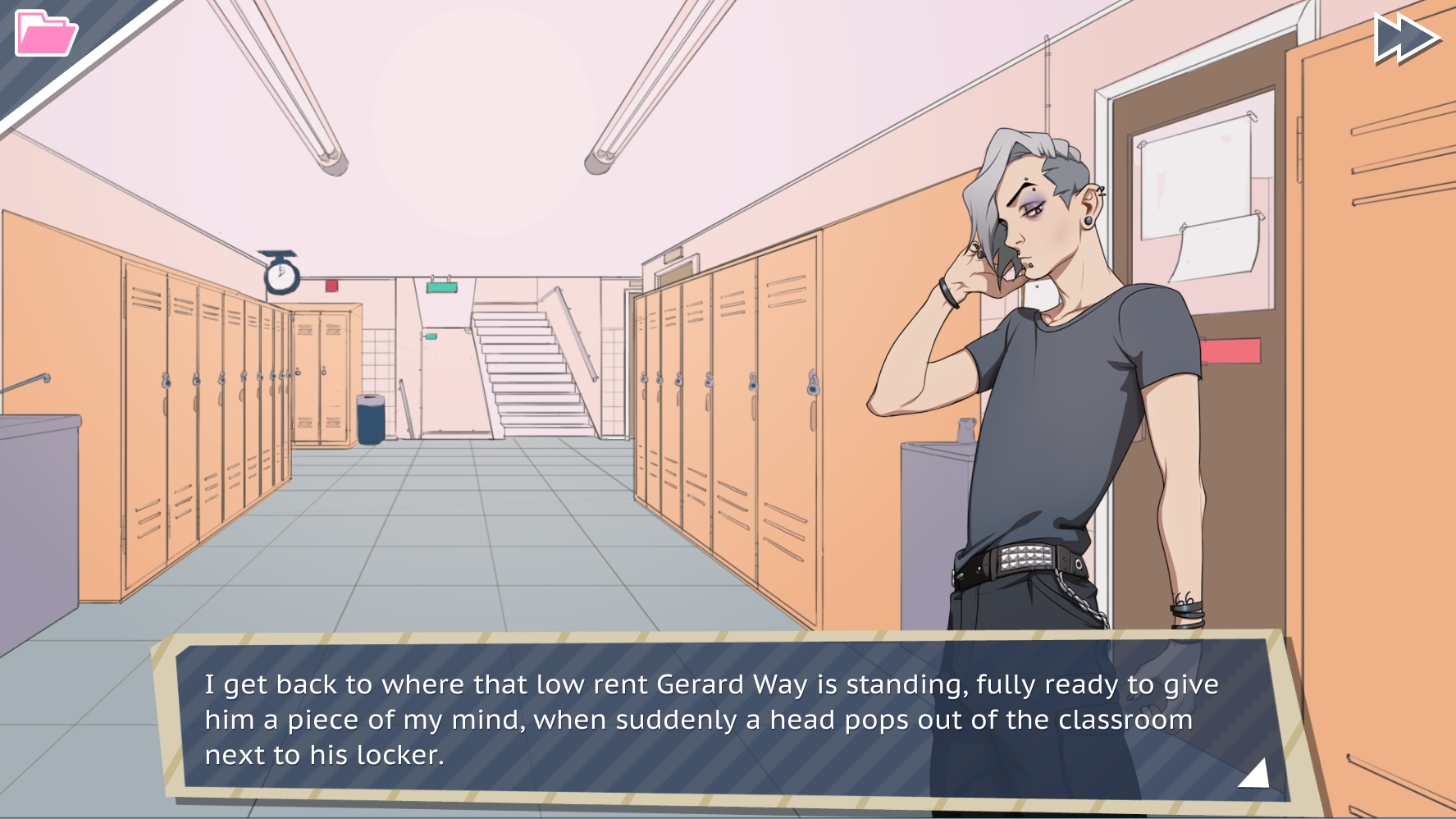 Gameplay That Stands Out

Clearly, there was more to this game than I had originally thought. It was funny and it was quirky, but it was also supremely well-written and fun to play.

Speaking of playing, the gameplay can be summarized by one word: addicting. Every single thing the game throws at you as a player works in conjunction with something else, creating a seamless experience. And nothing feels tacked on, second-guessed, or desperate.

To explain further, the objective of the game is simple: build a relationship with those around you, from your daughter to the available men in your new neighborhood. You’ve just moved, your daughter is going to college soon, and suddenly there are some available men, each with their own personality, that seem like suitable candidates for a dream daddy such as yourself. 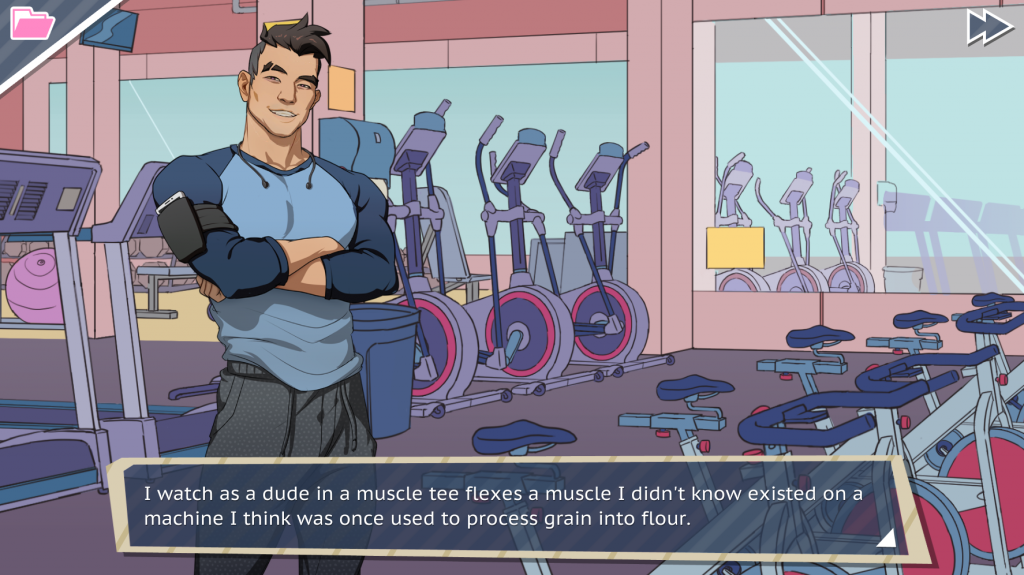 You know that one time you tried dating someone you don’t share a hobby with? That was fun.

As such, every decision you choose and everything you choose to say dictates whether the guys like you or not (and if they do, there’s a bunch of heart and eggplant emojis that pop up on the screen). That means, much like in real life, you choose who to whoo, and who do act like a goon around with reckless abandon.

This presents a unique spin for the player. If you’re someone in a committed relationship who hasn’t played the field in at least a year, you’ll connect with the playable character so much more than someone who’s currently mingling. The main character is actually pretty unsure—hesitant, yet super excited to meet potential prospects—so not currently being single makes you put yourself in his shoes. You might think, “Oh wow, this takes me back to that weird time!”

Of course, that’s not to say that single people can’t connect with the main character. They can use their dating skills, the ones they sharpen daily in real life, and apply them in the game as well. They can look at one of the available daddies, whether it’s the gothic Damien, the intellectual Hugo, the gym rat Craig, or any of the other ones, and think, “No, not him, but the other guy? Yes!”

On another note, just when you think you’re going to be clicking the screen just to progress the narrative, Dream Daddy throws mini games at you. They can be retro, like the one below, or they can be cute and compelling. 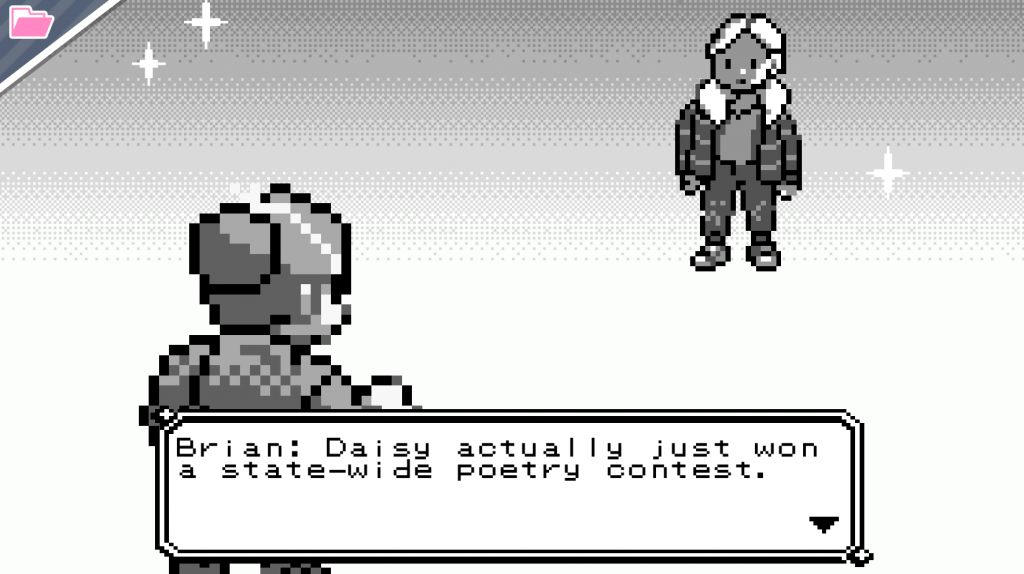 The dad bragging contest: Who will win?

Speaking of Connecting with Characters

The main character is a world of his own. He’s quirky, sure, and hilarious, but also, he knows how to be a great dad and friend to his daughter. He doesn’t scold her, but he does try to pry when she’s texting and laughing and denying liking her new male friend. He doesn’t nag at her, but he does attend meetings with her teacher and aim to help her with her issues.

It actually made me think of a weird blend of my own father and a close friend. On one hand, he very much knows how to be a parent, but he also pokes fun, responds to “Dadtron 5000,” and asks his daughter to explain memes to him. 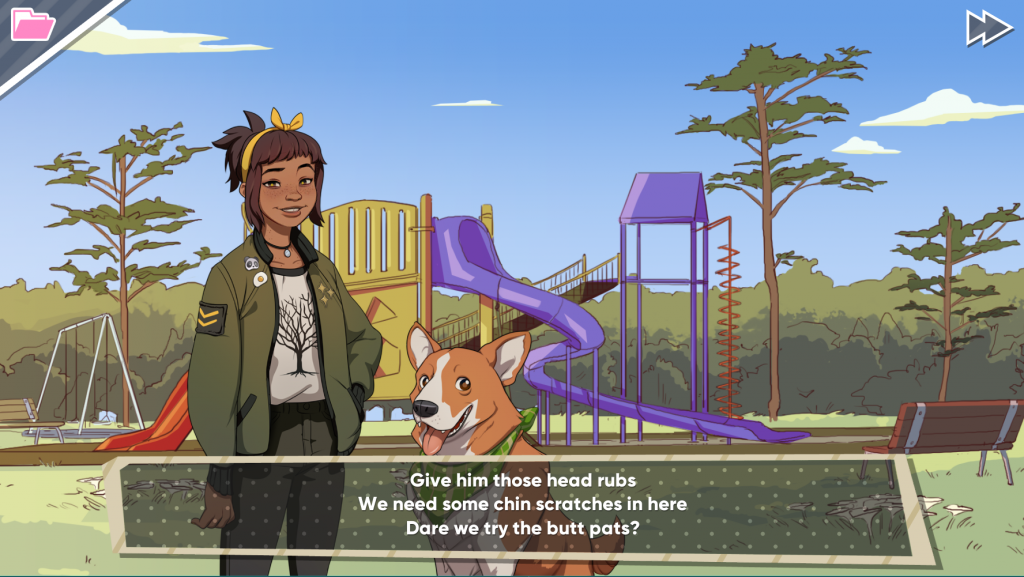 When I saw Maxwell the Corgi, my heart fluttered.

He’s old, he’s witty, but most of all, he’s a relatable character. But then again, the rest of the characters are also quite relatable in their own ways too. And the dialogue and story line have a lot to do with that.

The narrative just flows so well. Nothing feels artificial, nor fabricated in a fictitious way. The characters all talk like regular people. It’s not only nice to read, it’s also immersive. As a player, I found myself caring for them, caring about their story lines, and genuinely captivated.

Putting It All Together

What began as a hyped up dating sim that I was excited to play but didn’t take seriously turned out to be, hands down, one of the most polished games I’ve ever played. And I’ve been playing video games since 1994. Between the immersive story lines, the memorable characters, the realistic dialogue, and the addicting gameplay, everything flowed effortlessly. Nothing felt like an after thought, and nothing felt out of place.

So, yes, even a quirky hook like “Hot dad dates other hot dads” can be a success as long as the gameplay is memorable. And this one certainly was!

But what are some things you can take away from this? What are some actionable tips you can learn from Dream Daddy?

Seriously, unless an element works in conjunction with other elements, thus providing the player with a seamless gameplay experience, don’t add it in. It’s just going to detract from everything else.

2) There have to be elements of cause and effect.

In real life, every action has a reaction. Dream Daddy is the king of applying Newton’s Third Law of Physics, only not physically. It’s all about choices. Anything the player chooses to do or say will either have a negative reaction (another daddy may not be so infatuated with you) or a positive one (now he’s infatuated). In other words, the player should have to beware certain things, while aiming for other objectives.

3) Give me freedom or give me death.

We live in a world where the LGBTQ community—and straight players—can feel super at home with a game like Dream Daddy. A world where a kooky concept can be taken seriously once proven successful, largely as a result of exceptional design, writing, and overall gameplay. It’s only natural that players should be given a choice in how they play. The freedom to pick a daddy of their choosing, of saying what they want to say, and deciding whether or not to go to the gym with dream daddy Craig.

The beauty of Dream Daddy is that none of it ever seems like it took too much decision making. Everything goes together so well that it all comes off as a series of logical choices. Do we want the game to feel like a dating sim, but also come off as super girly to play up the dad factor? Yes. What color scheme is girly? Pastel everything. Should people be allowed to choose which daddy to go with? Definitely. Then they should be allowed to design the playable character however they want!

None of it is rocket science. It’s just smart thinking. Be super logical—and stay focused.

Speaking of focusing, immersion should be the ultimate goal. The thing that hooked me on Dream Daddy was the fact that it made me forget about the outside world. I was RuPaul, and I was thinking of what daddy to get to know. I found myself asking if Craig could slow down enough to not be such a gym rat, and I did question if I could steal Maxwell the Corgi from his owner, Brian (another dream daddy), because I didn’t want to date him.

Even narrative-based games like dating sims can have much more to offer. With The Sims, it was about interacting with the world while trying to date and work—and everything else for that matter. With Dream Daddy, the focus may be the writing, but the mini games provide a nice little break every so often. 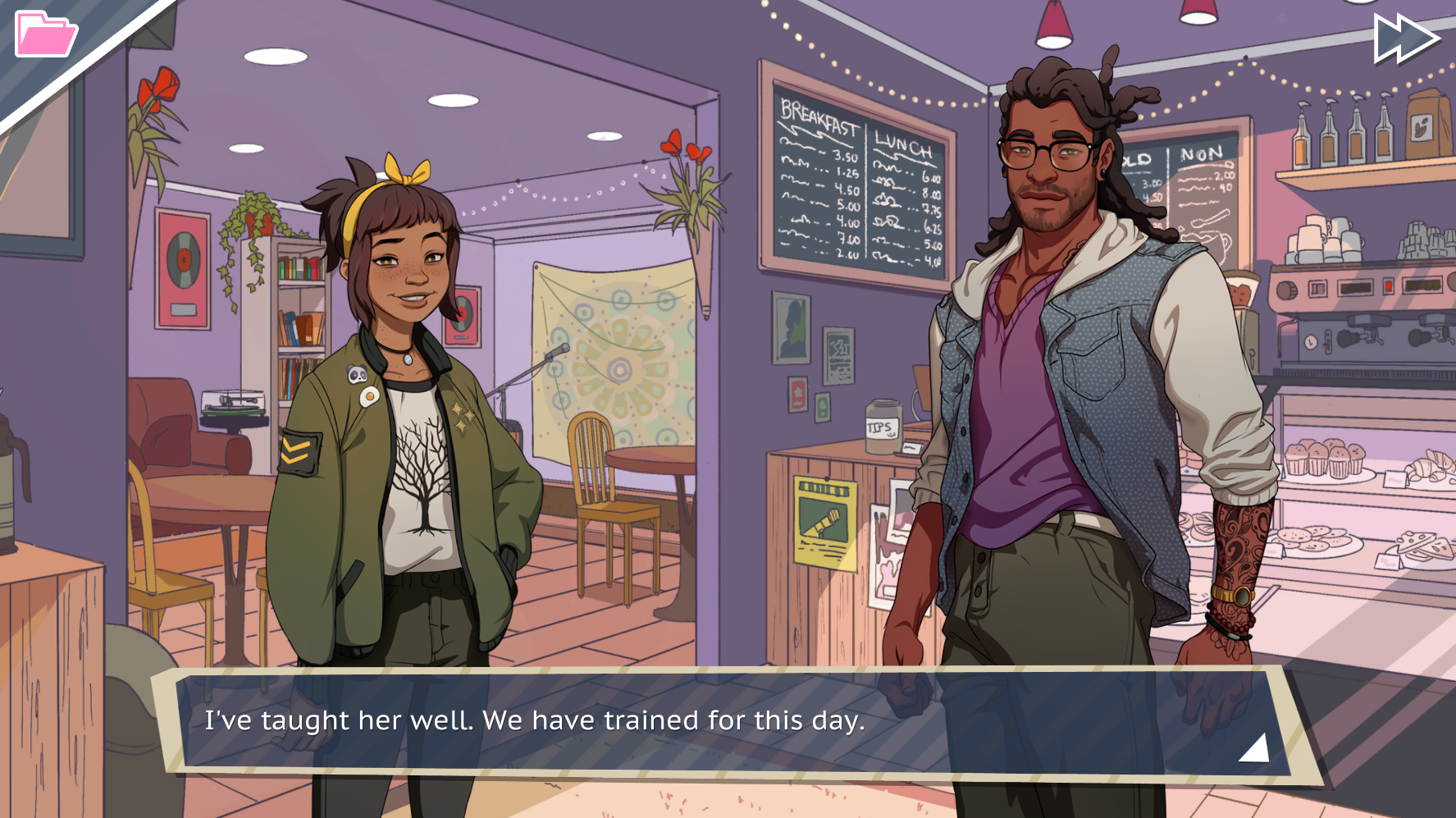 Like the saying goes, “Never judge a book by its cover.” This game has a ridiculous hook of dads dating dads, but overall, the game is polished. It’s an immersive, hilariously good time. Players who get the game just can’t be disappointed. And you know what? That makes the mini delay all the more worthwhile. Rather than deliver an unfinished game, Game Grumps communicated with their player base, wore their hearts on their sleeves, and spoke honestly about needing a little extra time.

Playing the game now, the time paid off two-fold and then some. There is so much to learn from this. This! A dating sim about dad crushes. Developers would be wise to analyze the game for themselves and figure out how to replicate the formula for themselves. Just remember: this game is unbeatable.

If you enjoyed this article, go ahead and retweet it! We love making new friends here at Black Shell Media, so don’t be a stranger.