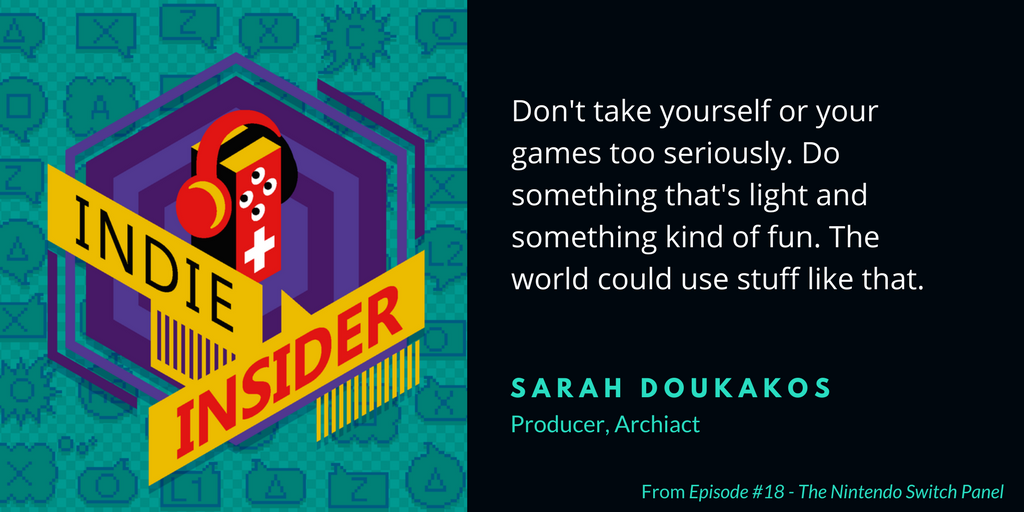 On the eighteenth episode of Indie Insider, host Logan Schultz leads the first Indie Insider Discussion Panel! Mark Soderwall of Indie Game University and Sarah Doukakos of Archiact return to the show, along with new guest Raghav Mathur of Black Shell Media, to discuss the newly presented Nintendo Switch. The panel shares their thoughts on Nintendo, the pros and cons of the new hardware, and what this means for indie developers!

Raghav Mathur is a social media marketing consultant, public relations professional, author and serial entrepreneur. He has been an integral portion of several startups, including a video game development and publishing studio, a photography business and an independent news website. As Co-Founder of Black Shell Media, Raghav has helped ship over 1.5MM copies of video games (SanctuaryRPG, Overture, Dungeon Souls and more.) He has also consulted for and published several independent games on major platforms such as Steam, the Apple App Store, and the Google Play Store. He is the producer of Indie Insider.

Mark Soderwall is the founder of Indie Game University, an exclusive online mentoring vehicle that prepares those who have the real desire to see their game developments & business realized & flourish, as well as the CEO of Adjoy, a reward activated marketing platform for video games. In addition, Mark has over 20+ years of professional game development experience in AAA, Mobile and Console spaces, and has provided game art and creative direction on AAA brands such as Star Wars and Star Wars Clone Wars, LEGO, Dungeons & Dragons, Indiana Jones, Terminator, Matrix & DC Comics IP. He was a guest on episode #13 of Indie Insider.

Sarah Doukakos is a game designer and producer at Archiact, an immersive reality studio specializing in virtual reality game development, publishing, and business solutions. Most recently, Sarah produced the game Waddle Home for the HTC Vive and PSVR. She has also worked as a game designer and producer for companies such as Nickelodeon and Cartoon Network, working on major IP such as Spongebob and Teenage Mutant Ninja Turtles. Sarah Doukakos, along with her colleague Andy Bacon, was a guest on episode #7 of Indie Insider.

Indie Insider, presented by Black Shell Media, is the podcast that dives into the independent video game scene by speaking with indie developers, publishers, and industry professionals about their projects, stories, and thoughts on the hottest current topics! Indie Insider airs every Monday on BlackShellMedia.com and podcast hosting sites everywhere.

Black Shell Media is a publishing and marketing firm dedicated to helping independent video game developers reach massive audiences, publish financially successful titles, and turn game development into a career. It’s our mission to help game developers get more of what they want out of a rewarding opportunity in the game industry: more fans and sustainable revenue to keep them moving forward.