5 Physics Tips You Can Apply to Game Development

Physics are everywhere, from the way your main character moves and jumps to the way elements collide with each other. And because it’s everywhere and is a core component of most gameplay, it’s also a crucial component to nearly any video game. As simple as that. You can have bad graphics, no music or even boring levels, but if the physics on your video game doesn’t work perfectly and smoothly, your players will run ragdolling to the hills. Nailing the physics behavior is not an easy goal. You can never be 100% sure that you’ve tried all the possibilities your video game world can offer. However, I can give you five tips I learned during the development of a platform video game regarding this topic. May the physics be with you, my young padawan:

Assuming your video game is completely new, you’ll probably need to go through the difficult decision of picking up a game engine before implementing anything. Think about the characteristics your video game needs and check which engines give you that by default. There is no need to reinvent the wheel. Once you have made up your mind, feel free to spend as much time as you need in proofs of concepts with the candidates to make sure they suit your needs in different scenarios. The more parameters you can configure in an engine the better, because you will be able to fit it exactly to the gameplay. If you’re still undecided and want to have other issues in mind, feel free to read this great article by a colleague.

If after researching and testing far and wide you conclude your video game needs a physics so particular you need to implement it from scratch . . . be careful! Developing a whole physics engine is very complex and will increase development time more that you can imagine. Furthermore, people are used to gravity working top down and a body not taking the same space as another one simultaneously. After all, that is what we are used to experiencing every day. That is why if you want to include innovative physics you need to make it coherent and intuitive to your players, or they will find your game so disturbing they will play it never more.

A good example of a video game that has used innovative physics to make a difference (and has done it successfully) is the Super Mario Galaxy series. Mario can circumnavigate round or irregular objects. Is this realistic? No, but players understand right away that Mario can walk around planets without falling into the space. 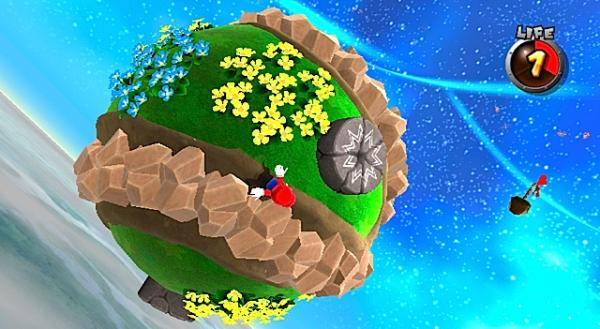 2. Game in the Fast Lane

If your video game falls in the category of action games, you definitely have to make your physics as agile as possible. And agility means speed: you don’t want your users to press the walk button and get bored while the character reaches his destination. Measure distances in your levels according to your character’s speed and always choose the highest possible value. The faster you go, the higher the adrenaline rush for your players as you lose control. That’s why people prefer sports car rather than bikes in the GTA series for example. Try to achieve the average point between speed and control in your physics world.

Agility also means not getting stuck in slopes or between tiles or trespassing walls that should be solid. If your player needs to move from A to B, make the elements in your level to cooperate to make the transition as fun as possible. For example, which one of the following paths do you think improves gameplay agility? If you think it’s the left one, re-read the paragraph and try again. 🙂

Game developers’ main goal is to turn players away from boredom. To achieve that, levels need to be dynamic and varied between each other. To emphasize that difference, do not be afraid to include elements that modify the physics rules of the game.

Remember the underwater levels in Super Mario Bros? They were hard as hell, but players still remember them because the common platform physics were modified to emulate underwater behavior.

Sonic’s speed shoes power-up is another good example. This burst of speed modified the normal agility/control dynamic of the game and sent things into a fun, fast-paced race through the level. I told you: players love when things go quickly!

It is always a good idea to include elements that modify your character’s speed or gravity or even prevent them from colliding with bullets or enemies. That will make your video game much more dynamic. Try to make it clear enough when that state change is taking place so the player is not disoriented.

The character your player controls is not the only one who is affected by physics. In fact, everything should be affected by physics. Well, sometimes floating coins need to stay in the air—it is the only way they have to draw attention. What I mean is that NPCs should be under the same gravity, frictions, and collisions as the main character and should follow the same movement patterns.

One common mistake mostly noticed in low budget video games is that the behavior of NPCs are repetitive and predictable. Just by looking at them for a while, a player can anticipate what their next movement will be. This lack of detail is mostly noticed in the enemies’ death animations. In old—and not so old—video games, no matter where you shot the enemy, they would always scream, fall, and die following the same pattern. These are the details that reduce the quality of a product. Try to put attention to them and not make your NPCs feel like solid tree trunks.

A recent and funny example of NPCs not following the same physics criterion is GTA V—despite it being one of the best games when it comes to NPC intelligence. Just follow one pedestrian randomly and you will be surprised about how different everyone behaves. Fans of the series do not understand why trains cannot be driven as bikes, cars, and boats can. In fact, trains are unstoppable, which breaks any common physics rule because . . . what happens when two unstoppable trains collide?

Maybe you have included an obstacle too high that makes your player go through another path to finish the level. If afterwards you decide that the game experience improves by making the character jump higher, you cannot make sure all of the levels maintain the same difficulty because your character now may be able to jump those obstacles. It can happen the other way around, too. A level you already tested can become impossible because new physics changes make it so. For example, if you make a vehicle more slippery on curves, it may not be able to make it to the finish lane of the time you first specified. Level design and construction phases are long and complex enough to make it worse by modifying the core of your video game too late.

Try to design a Zero Level where you test all the different combinations your final video game will have: enemies, power-ups, springs, speed-ups, etc.. Do not keep advancing in the level design until you are completely sure all the combinations work and you have a final fluid game play.

There are a lot of video games that were successful because they proposed a different physics world: Portal, Just Cause, Dead Space, the list goes on. However, many others just try to emulate the real world and have been successful as well. The important thing is that you and your team are always aware that physic is your foundation. Be careful, because if you cannot keep the foundations free from bugs, the building may end up falling apart.