3 Ways to Find the Journalist That’s Right for You

The most quoted advice for PR newbies is to make sure you are pitching your idea to the right journalist.

When you fail to identify the right person, this happens: 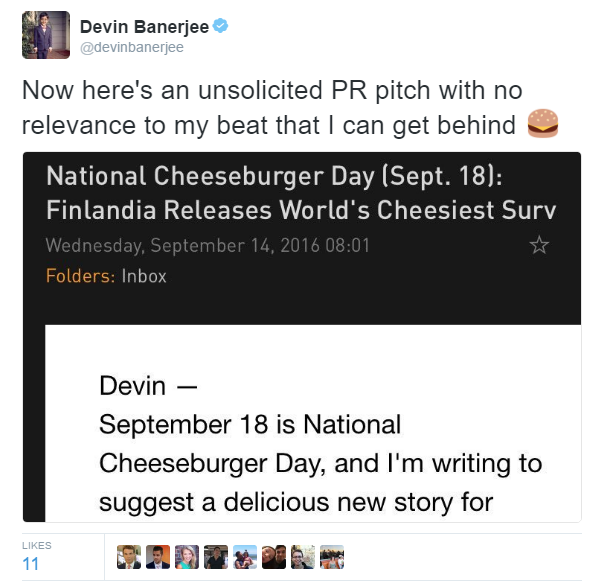 Devin Banerjee writes for Bloomberg Business, and not . . . Bloomburgers.

Failure to recognize a journalist’s beat can result in them deleting your email. Or worse, mark you as a spammer so future emails will never come through. Journalists are busy people.

Former game journalist and director of Stage of Development, a web series about the indie scene, Russ Pitts mentions that as a writer for video games, it was common for him to be composing 3,000 words a day (about 6-8 articles). When reporters are under the gun to push out so many articles, they’re looking for only the best pitch and delete everything else.

If your game aligns with the journalist’s beat, your email will get higher priority.

In this article, I’m going to share three ways to identify journalists who would be interested in your game. When you do reach out, they’ll be more likely to give you the attention you deserve.

With this approach, you’re looking directly at various sites that review video games. Explore the site a bit to make sure that your game is a fit. Then, look around for a contact form or an email address.

While you’re exploring the site, there are two questions you should be asking yourself:

Releasing a game on Steam? You’ll be wasting your time hunting for journalists on PocketGamer.co.uk, a gaming site for mobile games.

2) Are there stories similar to your game on their site?

Find proof that journalists on those sites review games similar to yours.

Writers on the main gaming sites frequently write reviews for big budget games. If an indie game does get a reviewed, there’s a possibility that the game was covered elsewhere.

Find the right type of site that matches your game’s style and genre. Look beyond the big gaming sites like Polygon, Kotaku, IGN, and Gamespot. There are much more sites out there that are smaller and cater toward very specific audiences. Smaller sites, if the alignment is right, are more likely to pay attention.

Method #2: Identifying Journalists Based on Their History

In this approach, you’re looking for articles that relate to your game’s genre. Before I share how, I want to give you some background information on how the press works.

Like the example I mentioned at the beginning of the article, journalists have a beat that they follow. A reporter who caters to only MMOs and the e-sports scene has no interest writing about your mobile RPG.

Let’s flip the tables. Imagine you were a video game reviewer. I just pitched for you to play my game, a modification of  the board game Go, but with a twist. If you don’t know how to play Go and don’t care about Go, then you probably would have tossed my email without a second thought.

So here’s what to do:

Journalists need game developers to write articles, and game developers need journalists to get press. Since reporters are on a deadline, you’ll have to bring your goods directly to them. The benefit of identifying journalists through online research is that you might discover writers who report to many sites.

There are a few strategies for finding the right journalist online:

1) Through Twitter searching
The most obvious method is to use twitter’s search, and type in words like “game + journalist, contributor, editor, writer, etc.” Explore their twitter feed for any proof that your target reporter will be interested in your game. If you find one that’s a perfect fit, make the connection via twitter!

Additional method: other indie devs may have already done the hard work and created a Twitter list with journalists. Look to your indie peers that have similar games and dig into their lists—after asking first! 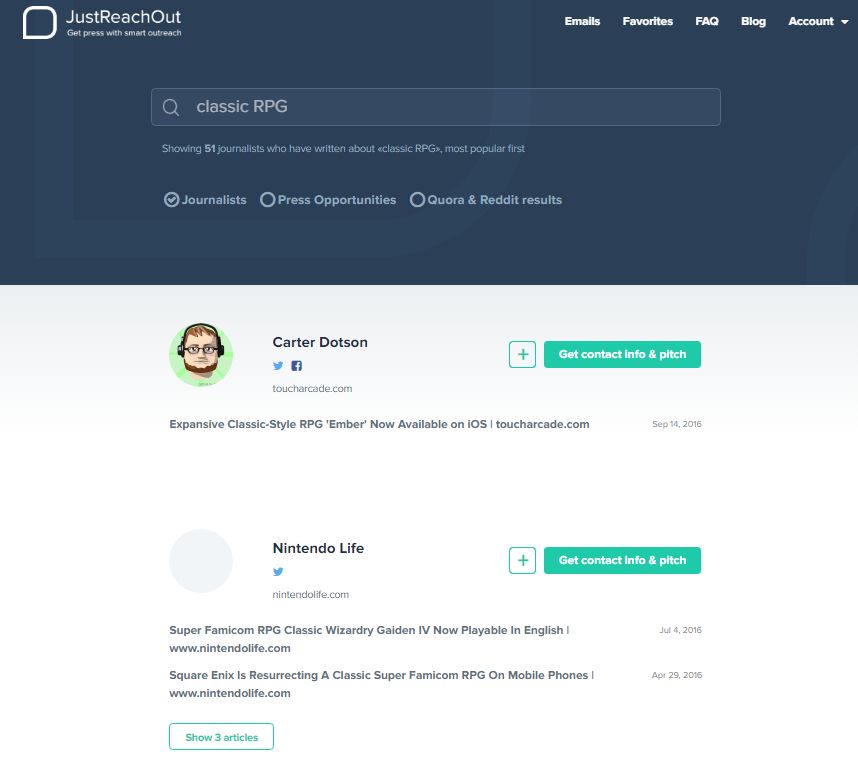 2) Using a journalist search engine
The two sites I recommend to find game journalists are https://justreachout.io/ and https://www.hey.press. They’re free to use (up to a limit). You can search for your genre (example: classic RPGs) and find journalists, their most recent articles, and their contact info.

From there, you can look into their history to see if they’re a good match.

Understanding what journalists are looking for is one of the keys to getting press for your game. Be aware that identifying the right journalist is only the first step—building a relationship is what’s next. Go out and make those connections!