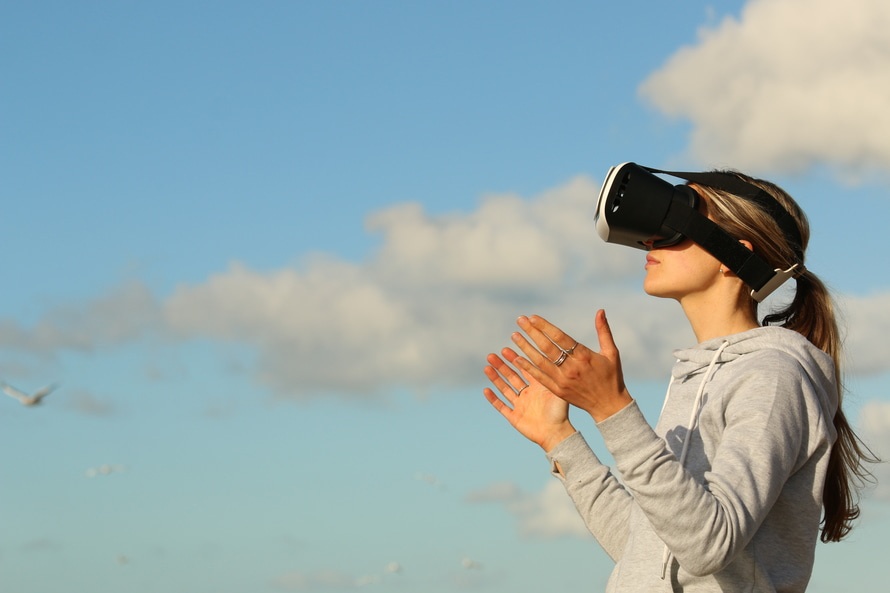 Virtual reality seems to be the next big thing in the entertainment industry. But VR is not that new, and maybe it will not be as popular as experts predict. With a quick look into our own past and the origins of VR technology, we can identify important failures and achievements to date and compare them to the current technology. Is VR something we can imagine our children playing in the future, where instead of glued to the TV, they’re glued to a pair of VR glasses?

Virtual reality refers to any kind of software that generates the illusion of a real environment. But this doesn’t mean any realistic video game is VR. It is widely considered that any VR contains at least one of these elements:

It can be considered that the first attempt to combine VR and computers was in 1968, when Ivan Sutherland and his student Bob Sproull built the first head-mounted display (HMD) system connected to an external CPU. Their prototype was called “The Sword of Damocles,” because it was so heavy that they had to suspend it from the ceiling to track the head position. The coolest—and only—thing you could do with the headset was moving a 3-D wireframe cube around the room.

The first serious try to put VR on the market came with Sega. The company had just launched Megadrive in the early ‘90s to great success, which led to important earnings that were invested in R&D. That’s how Sega VR was born: as Megadrive extra hardware. It was presented as a prototype in several exhibitions, where it did not convince those who dared to try it.

Sega VR was a device similar to Oculus Rift, with the main difference that the screen only displayed 320x224px with a low frame rate. The poor quality image—which was a result of the technology limitations of that time—made the users feel dizzy and disorientated after playing. Along with this, video games had to be implemented specifically to support 3-D vision, increasing the development costs. Sega had to consider VR was not a good idea after all. The device never went public and was only released as an arcade video game. 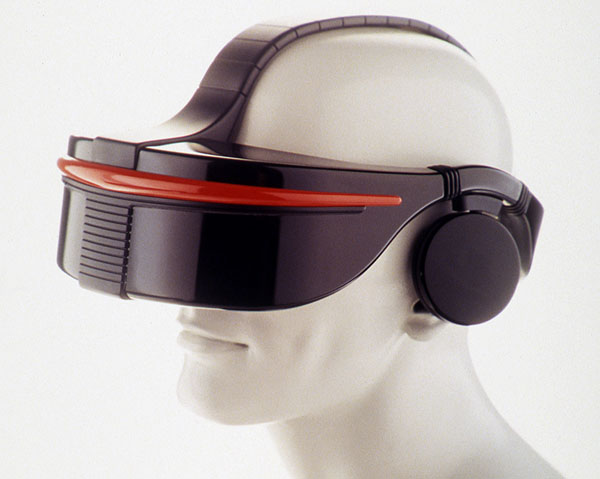 Nintendo’s chance to blow up the market with VR happened in 1995 with a console called Virtual Boy. This one is considered one of the worst video consoles of all time so, as you can imagine, it was not a success either. Players had to look through a headset that was fixed and did not track head’s movement. The 3-D effect was achieved using a red monochrome display that, according to Nintendo, was the best choice for keeping the price of the final product down. Imagine people’s disappointment with the graphics when you compare them to the Playstation 1 that was launched the same year.
Another good reason for its failure is a constant in VR’s history: vision problems with extended use. In fact, Nintendo implemented a software timer that suggested users to rest every 15 minutes.

Other old and forgotten glories

Cybermaxx by Victormaxx, iGlasses by Virtual I-O, and VFX1 Headgear by Forte Technologies were all HMDs launched by smaller companies that were not successful for the same reasons as Sony and Nintendo: technology was not advanced enough to create a complete immersive experience that satisfy all players. In fact, most did quite the opposite, causing eye strain and nausea.

Companies buried the idea of virtual reality very deep until a “crazy” guy decided it was time to unearth the concept and make it attractive once and for all. His name was Palmer Luckey, and he founded Oculus Rift with John Carmack in 2012.

Oculus Rift’s first product version saw the light of day thanks to Kickstarter, where it collected more than $2 million in backing. For the first time in years, the world demanded VR on a massive scale, and Oculus Rift was the first one to notice and answer the call.

The product is a Head-mounted-display (those are the magical words to any VR device) that connects to the computer through HDMI. The display uses an OLED panel for each eye and the headset contains integrated headphones. A 6-degree tracking system was a patent from Oculus itself.

This product generated a big hype over the last years, and people started to feel disappointed after the release date was postponed over and over again. Thankfully, Oculus reacted by launching an early version called Development Kit. It had lower specs but helped with the long wait and, what was more important, encouraged players and companies to start experimenting and developing special video games for the platform. The consumer version was finally launched on March this year, with the best display technology, better positional tracking, and having improved comfort. Recently, touch controllers have been included in the most expensive pack, which are used to interact with the scene as if you were doing it with your own hands—but users will have to wait until December to receive them. 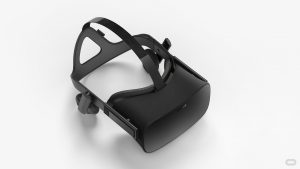 With the Oculus Rift finally in the worldwide market, its games library is constantly growing. Some of the best examples are Chronos, Eve:Valkyrie, and Dragon Front.

The folks at Google are smart and took advantage of Oculus’s delay, proving that VR is not that difficult to achieve. They noticed how far mobile technology had arrived and put a device inside a cardboard box . . .  and voilá! Google had made VR affordable for the first time in history.

Using any mobile’s gyroscope and half of the screen for each eye player gets immersed in the game, although the experience depends a lot on the mobile resolution. After Cardboard, the internet was full of headsets in different materials with a better or worse finish.

An improved version of the same concept came with Samsung Gear VR. The main improvements are the professional quality of the headset and that the user has a way to interact with the software using a touch pad placed on the right side. User can tap or swipe, which was an important lack in Cardboard. Furthermore, this product has been powered by Oculus Rift and some video games can be played on both platforms.

Some cool video games demos that can be downloaded for free in Google Play and enjoyed in Cardboard or Gear VR are Lamper Cardboard: First Flight, Titans of Space Cardboard VR, and Incell VR.

HTC Vive, the Most Powerful and Complete

HTC Vive is the result of cooperation between software developer Valve and phone manufacturer HTC. Valve was cooperating with Oculus Rift originally, but some discussions about how VR in computers should be like ended up in Valve betting on its own product.

The innovative thing that HTC Vive has are the controllers. Until that time, users just could move their heads to see around the virtual world. Vive includes a pair of intuitive motion controls that increases the game possibilities exponentially when the user has them in his hands. We have to keep in mind that Oculus will not offer this seemingly obvious piece of hardware until December.

Another distinguishing feature that the other products do not have is positional tracking. Thanks to two cameras the user has to place in the corners of the room, player can walk around and the game reacts accordingly.

Steam has a specific VR section to download video games compatible with HTC Vive. Some of the most recommended are Arizona Sunshine, theBlu, and Space Pirate Trainer.

Finally, the newest smash hit that was put up for sale on October, 13th: Playstation VR. The Japanese video game giant has bet on VR with an incredible market campaign. The complete Playstation VR set consists of a headset, motion controllers, and the Playstation camera, although there is a cheaper package that only contains the headset.

It is still too early to determine the success of this product, especially keeping in mind that the specs are a bit lower than Vive or Oculus. Why is it a good alternative then? First of all, it is the cheapest one if you already own a Playstation 4. Secondly, Playstation is considered a world-class video game publisher, which almost ensures AAA video games, not just experiments or playable demos. 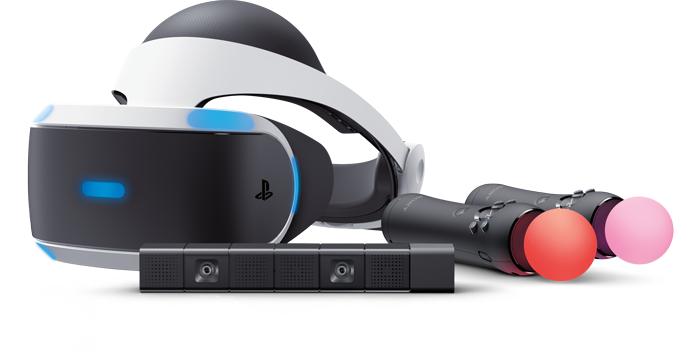 The best video games are yet to come to this new platform, but for the moment, the following have gathered a lot of good reviews: Batman Arkham VR, Tumble VR, RIGS: Mechanized Combat League, and Playstation VR worlds.

What Will the Future Hold?

Now that we have put into context what virtual reality has left behind, it is time to look ahead and ask ourselves some questions:

Who Will Be the Market Champion?

You already know their names, their strengths, and weaknesses. Now, it is up to time and buyers to determine if some (or none) of them achieve success in the games industry. You can compare some of their features at a glance: 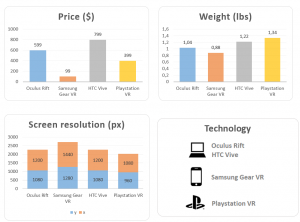 Despite the important evolution of VR throughout history, there are still some pending issues:

What are the Odds?

We are living in a historic moment in terms of virtual reality. This year is the year that this technology is going mainstream. The problem is that predictions were much more optimistic than reality. At the start of the year, the analyst company Superdata estimated that VR was going to achieve a worldwide revenue of $5.1B.  Last April, the amount was cut down until $3.7B, although it is still high in coming-year predictions.

Like with anything, there are supporters and haters, but most of the time nothing is black or white. Now, VR’s main problem is its price and that only early-adopters are giving it a try. I personally think VR will reach its peak in a couple of years but will still not convince the most traditional players that will prefer to play sitting down and using their controllers. The technology will continue to improve, but I’m afraid that when the novelty has passed, the market will shrink, as it did before. I really hope I’m wrong, because I consider myself a fan of VR and I believe in the great possibilities inside and outside the video gaming industry. Maybe we’ll see VR find more life in gameified experiences, educational programs, or adult entertainment. Only the future will reveal the truth.