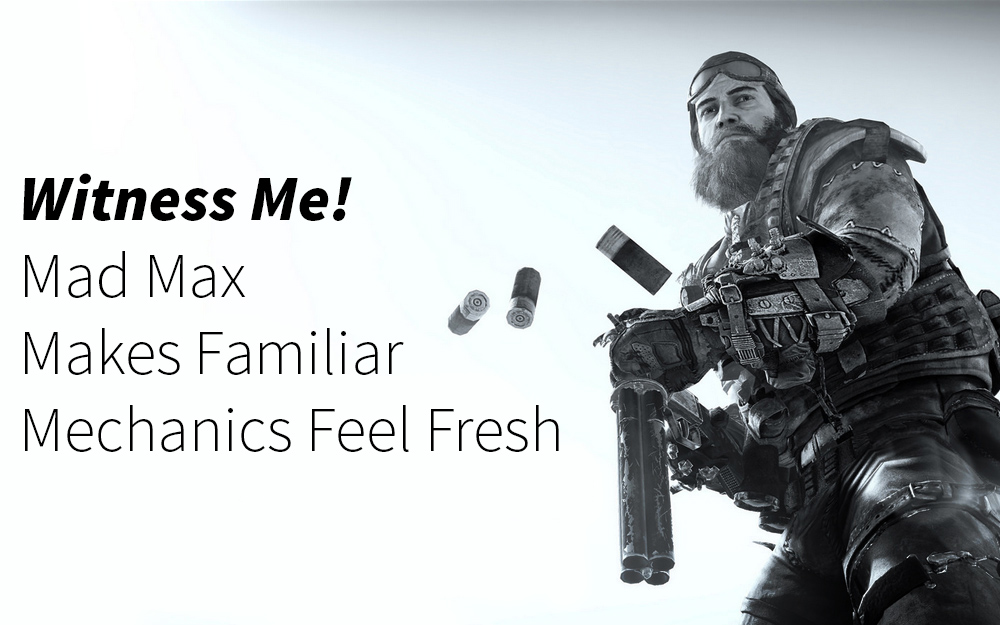 These days, movie-licensed games don’t usually offer much when it comes to unique and refreshing game play and experiences. Games based on movies normally don’t sell well and likely end up in the bargain bin the year of release. So when it came to a game adaptation of the movie icon of Mad Max, Avalanche Studios had one hell of a task on their hands.

The design of Mad Max focuses on atmosphere, vehicular combat, and exploration of a post-apocalyptic wasteland. The development focus was on atmosphere for the apocalyptic wasteland, surviving on an open road in vehicular combat, and exploring a desolate, open world filled with an infinitesimal amount of sand and rocks.  A key annoyance with open world games is the chance of it becoming a repetitive experience and feeling lackluster before the player finishes the core story content. Players even class many open world titles as “fetch quest simulators” and “collections” based on the fact that repetition and completing a checklist are amongst the main elements of game content. This type of game content tends to work as filler between main story content whether intentional or intentional. They stray away from the norm,  Avalanche Studios stuck closely to its source material with deep immersion and game world and story ambiguity.

During the last 15 years, the open world design format has evolved to follow similar game mechanics that are shared between different games. They incorporate an environment where a character gets places into where you the player have the options to venture out into any direction activating and completing missions and quests..Exploration is a key focus with the open world genre. Depending on the design of the game sometimes larger world may also have loading zones. Open world games sometimes get criticized for being repetitive and lacking originality. Many games borrow various game elements from other games. The Batman Arkham Series, Assassin’s Creed franchise, and Far Cry games are amongst some of the games that have used various elements of each other in one way or another. Whether it’s having a large checklist to complete, similar combat elements or quests that add nothing of value to the game experience. All the while making the whole experience tedious and tiresome.

Encountering Griffa, a wise survivor who acts as a character upgrader.

Detracting From the Mundane

Aside from visuals, gameplay, and content provided to a player, immersion needs to be of equal importance. There is definitely much more flexibility when it came to the source material, even though there is not a lot to work with through the films. The developers took the source material and extrapolated it to explore the characters, the world, and what happens in a hypothetical “Australia Post-Apocalyptic Wasteland.” Mad Max’s wasteland is a daunting and harsh environment. This provides a unique experience for players for fans of the films and even newcomers. Continuity is not a big issue here so it’s suitable to play the game before watching the films. The game comes with usual open world format mechanics, quests, collectables, exploration tasks, and unrestricted freedom. Mundane tasks like this are common although become less dull when mixed in with random AI encounters and an amazing rustic and desolate visual design. It blends well into the world, atmosphere and sound design Avalanche Studios created for Mad Max. 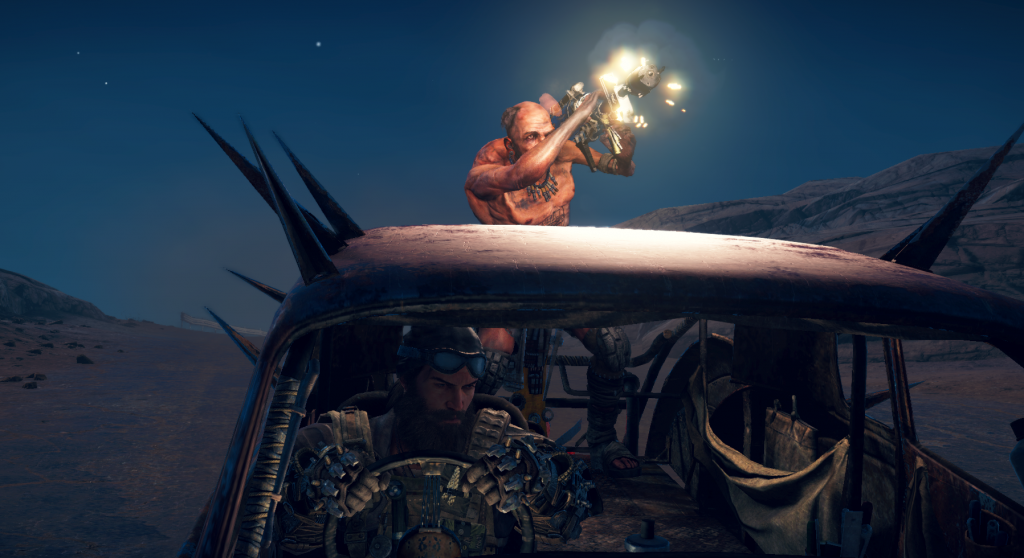 Gameplay designed within Mad Max relates to its source material well. Real world physics affect vehicles, and different surfaces change how you traverse the game environment. Adding armor to your vehicles changes how heavy you are, which changes handling and also acceleration. This incentivizes constant customization of your vehicle to suit the gameplay or the situation you are in. Driving through the wasteland, you have the chance to have random AI encounters. These usually consist of bandits or mutated survivors who are there to kill you. On top of that, combat within Mad Max respects the rules of real life combat. There is no animation cancelling when countering enemy attacks. In games like Batman Arkham or Shadow of Mordor, there is instant feedback from your character when countering. But in Mad Max, countering does not cancel your animations, leaving you open to attack. This leads me to believe that this feature is part of why the game does not have a difficulty setting, as melee combat is not the only thing available to the player to use.

As an Australian, I had an eye on this game when it was announced but become worried after watching some early gameplay. I was unsure of how well designed the vehicle combat could be. I was curious due to Avalanche Studio’s car handling in the Just Cause series and how it would fare in the Mad Max universe. I avoided coverage of the game and preordered it one day before release, fears subsided upon my first hour of gameplay. I looked into more of the marketing and it was clear there was a greater focus on vehicle traversal and combat rather than the standard on foot combat. This is where the game shines as the on foot combat is familiar on a base level to other games.

A bandit “boarder” transfers from enemy car to Max’s car

The Genre is Evolving…

Giving a player something to do is one side of the coin, and fulfilling all the other elements to immerse a player is the other side.  If players are interested in the world around them, then completing tasks, even of a mundane nature, are less of an annoyance without that immersion. The open world genre is evolving and changing for the better, albeit slowly.

Developers can look at the ideas spread out in Mad Max to improve general immersion in their own games. Many open world games have you playing as one person going around by yourself, doing the various tasks and general exploration. Mad Max incorporates an NPC buddy of sorts, a mutated hunchback human known as Scab, who operates weaponry on your main mode of transport. This character essentially takes out the feeling of loneliness when traversing the game world. Even though scripted dialogue will eventually end up repeating if you stay in one area for too long, the presence of another person is something that adds to immersion and does a good job and will bring a big smile to many of the players.

Mad Max still has the many traits that players are more likely to loath in some situations. The game supplies the player with a checklist of collectables and challenges, which does act as optional filler. Due to the focus on immersion and the goal of using the source material in the best way to match what worked in the films in terms of visuals and story, this checklist is less tedious. This should be a top priority for developers borrowing ideas and mechanics that are shared in many of these open world games.