The 4 reasons Guitar Hero got so popular

In 2005, Activision published a music rhythm game that made waves throughout the US. Guitar Hero allowed anyone to grab the controller and become a rock star, throwing themselves into the shoes of Slash, Jimmy Page, Ritchie Blackmore, and others. In the years that followed Guitar Hero’s release, Activision published several sequels and spinoffs; to date, the entire series has earned $2 billion USD worldwide. 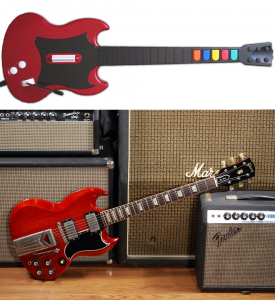 So what led to Guitar Hero’s stardom? What are the components of the recipe that launched 25 million copies and created countless living-room legends?

Guitar Hero appealed to more than just those initiated in the gamer crowd. Anyone who hadn’t touched a controller before could get engaged—and invested—in making music on the Guitar Hero stage. The 47 songs in the original game include well-known and well-loved acts such as Queen, Black Sabbath, the Red Hot Chili Peppers, and Judas Priest. Giving gamers and non-gamers alike something that they could identify with allowed Guitar Hero to hit more targets and make more connections. And with four difficulty levels that included six tier-levels in each one, it was easy for newcomer and veteran alike to find a place to start.

2.     The Controls Are Delightfully Intuitive

Since the beginning of video games, the dream has been to make sci-fi-like controllers that immerse the player in the action, allowing them to do more than just press buttons on a standard layout. Unfortunately, many of these dreams ended in the scrap bin.

Guitar Hero’s controller is a dream come true for the gimmick controller. The dual-hand action closely mimics that of a real guitar, meaning that most everyone who picks it up will have a good idea of what to do. The big fret buttons are easy to find by touch, and the other hand has an easy time flicking between the strum bar and the whammy bar.

Even seasoned guitar players have found the imitation to be satisfyingly close to the real thing in terms of feel and hand positioning. When you take time out of playing the real thing to play the mimic, it’s a sign of success.

Any game does better when it can be used as a way to get people together, and Guitar Hero doesn’t disappoint there. Players can choose between lead guitar, backup, or bass, which means everyone gets their own role. It’s a much more engaging setup than everyone having the same sequence repeated for each player: we love our individuality. Guitar Hero also strides a fun line between competition and harmony. You want your band to sound good, but you’re also striving for the highest score. In Guitar Hero III, a “battle” mode was added for the more competitive souls, allowing players to interfere with each other as they played through “distractions”—a real battle-of-the-bands environment.

Simply put, it’s a great party game (and the soundtrack is jammin’).

Guitar Hero goes out of its way to make you feel like a real rock star. The controllers are modeled after specific Gibson guitars, which significantly ups the “awesome” factor—especially if the one holding it is a true rock aficionado. The hand movements feel authentic, and slamming the whammy bar to get yourself that extra star power is really satisfying. Cheering crowds react to how well you play, and the on-screen visuals are vibrant and help tie everything together into that whole package. Forget the sex ‘n drugs—Guitar Hero is pure, distilled Rock ‘n Roll.