Three More of the Worst Gameplay Mechanics in Popular Games 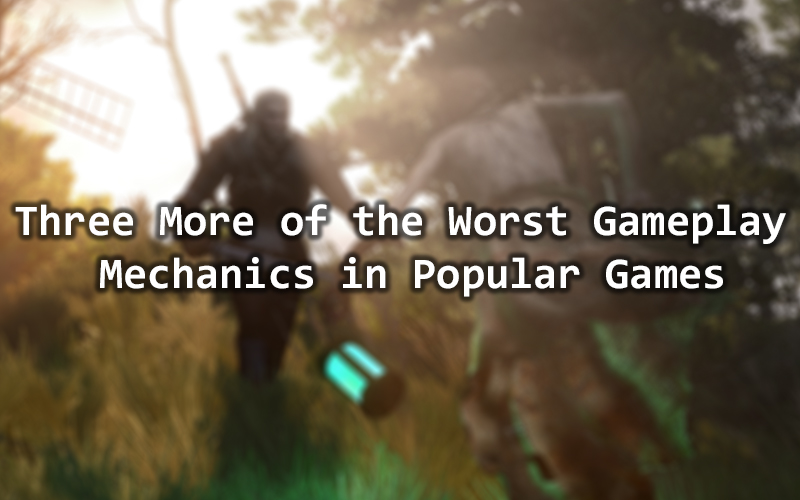 Over the years with choices in game development, we learn what works well and what doesn’t. Sometimes game design choices get mimicked or improved upon and sometimes those choices are repeated and end up having fewer issues depended on the type of game. There is always a crux to most game mechanics and many can be analyzed although I will cover three more common game mechanics that have proved to have issues in many popular games.

The most annoying thing in any game is playing for long periods and achieving various challenging tasks but ending up dying, only then realizing the game’s checkpoint system has sent you back through hours of gameplay. This happens too often in games where it shouldn’t happen. In many role-playing games, it is important to develop a save system that can allow for manual saves, quick saves, and autosave, with the possibility of fixed checkpoints related to story content. Many games do have this in place and it is always welcome to have these features as it gives players full control over their experience without any shift of pace when playing through hours of content. In some cases, however, we get games that rely on autosaving or checkpoints to the detriment of the player’s experience. It can happen way too often where a player is sent back for a minor screw up (or even worse, RNG), penalizing them by hours of progress.

A contrasting example of a game where it became apparent the developer understood this is in Hitman Absolution. It used a save system that changed with difficulty but only allowed for checkpoints and autosaves, which restricted a lot of freedom in gameplay. It forced the player to play extremely carefully, which sucked much of the fun from the game. The new 2016 (self-titled) Hitman brought back the ability to manually save in the main story mode of the game. Even though it is only allowed in the main story, it brought back the opportunity for players to experiment with their target elimination process, which is very important for this type of game.

A perfect example of where saving is used correctly is in the S.T.A.L.K.E.R. series. You have the ability to bind quick save and quick load buttons, save manually, have autosaves and even save using a console command ( ~ + save “savename”).

Hitman (2016) now has a manual save function

Why Are Some NPCs Slower Than the Player?

It’s an all too common occurrence where non-player characters tend to walk/move slower or faster and never match the player’s movements. This happens in many genres of games, from first person shooters, and third-person games, on escort missions in tutorial sections, rarely do we get games that accommodate a player appropriately.

Many Bethesda RPG games have had mods made where NPCs will match a player’s movement speed precisely which makes things a lot easier due to the three movement speeds available to the player. In The Witcher 3, NPCs will start moving dynamically when the player is close and try to match the player’s speed, which is the best example of proper NPC movement. And in Red Dead Redemption, players were given a keep pace button during travel dialogue with NPCs. Although in a plethora of other games, the player isn’t so lucky. In the Call of Duty franchise, nearly every character you have to escort or follow throughout a campaign mission will have a set speed which is different to the player’s default movement speed or their scripted navigation path is so erratic that it’s a chore to keep up with them. This will usually confuse many players. Good NPC movement only adds to immersion, having bad or awkward character movement only takes the player out of the game world and diminishes their experience.

Control of an in-game camera is normally an extremely important aspect of many well-known games, and it can usually kill a player’s experience of that game. Sometimes a game is so good in all other aspects that people excuse any poor camera controls.

An example of this is the earlier Resident Evil games, in which there was essentially no player control of the camera instead each area had a fixed camera which usually would be in different and unusual places and directions. The major issue with this mechanic is that when a player enters a room, the movement controls sometimes needed a change in direction to match which angle the camera was in or else the player would simply move in between camera triggers, making the whole experience very clunky. A more modern approach to fixing this common issue in fixed camera games would be to add a short delay to the movement of a player’s character so that the player can self-adjust on the new camera change without the confusing camera switches. Making sure it is only a short delay or else it may interrupt the flow of gameplay and be a detriment to the player.

Another popular game series, Ninja Gaiden, suffers from some poor camera control implementation, as a third person hack and slash, you would expect a lot more freedom with the camera. Instead, what we got was a somewhat familiar fixed design but in this case, the fixed camera would follow the player and try to keep them in the center of the action. This became a problem in many situations as the camera was prone to glitching out on walls and in heated battles. Many players would feel the need to attempt to adjust the camera with the right thumbstick on the controller, although that would only switch their view to a first person surveying mode, which would interrupt your gameplay. Many more modern games fixed these issues by allowing freedom of camera control, allowing the right thumbstick to control an orbiting camera around your character, leaving them within the center.

Why Is This Important?

These examples are staples of mechanics that many players agree need to be implemented carefully within games. Adding them into a game without prior thought or planning to how it is used and what it is used for can be disastrous. Being meticulous about how your mechanics function under various conditions will eliminate any impractical elements in your game. Making sure everything a player can encounter within a game is of some importance to the overall game is integral to a quality experience.