Four Games to Turn to for Inspiration 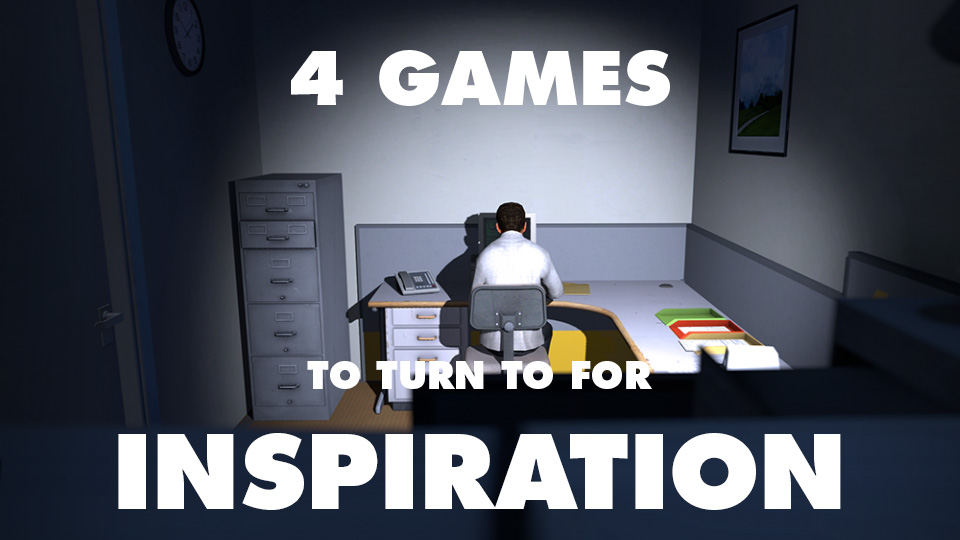 Inspiration can be a fickle thing. Even if we’re trying to work on that beloved pet project of ours, it’s perfectly natural to run out of steam or motivation at any given time. For anyone out there who may need some help to jumpstart their process (whatever that process may be) here are four games to turn to for some quick inspiration.

This instant classic might be just the kick of motivation you need to keep developing that story idea of yours. In addition to its astoundingly beautiful art style and streamlined gameplay, Journey features a surprisingly emotional storyline and expansive lore, especially given the fact that there is no dialogue, whatsoever. The actual amount of information there is to explore is, of course, limited, given the game’s lack of text or direction. But the atmosphere of the game generates the feeling that something epic happened in this world, and that something epic may happen, yet again, thanks to you.

Life is Strange: This choice-based game is an impressive cinematic experience, despite its deceptively modest setting and characters. With an intricate tapestry of details and easter eggs to discover throughout the environment and a kick-ass gameplay mechanic based around time (I won’t say more than that), this is a game you don’t want to skip over if you have the time.

Soma: This first-person thriller is not your average horror game. Rather than focus entirely on jump scares and gore, the game chooses to instill chills and fear in the player’s soul through deeply troubling moral dilemmas. Soma accomplishes something incredible by telling a truly disturbing and thought-provoking story.

The Way: From alien worlds, through ancient ruins, to killer robots, this intriguing 2D puzzle platformer features an uncommon approach to environmental storytelling, as well as an interesting approach to text-based dialogue and interactions. Useful for those looking for an alternative to the standard text-box we see in so many 2D games.

Simply put, The Stanley Parable features exemplary level design. In this witty yet cerebral game, the player usually makes choices by deciding what path to take throughout the map. This makes it especially important for level design to be clear and accessible. Should the player become lost in a game like this, the entire crux of the experience is put at risk. The Stanley Parable is a game that empowers players with the choice of where in the map to go, while still maintaining a highly controlled sense of linearity, wherever the game should progress. Furthermore, the game’s environments evolve in atmosphere and design over the course of the game, subconsciously complimenting the player’s choices.

Civilization V: For a different perspective (literally!) on Environment & Level Design, Civilization offers an excellent look at how a game can portray and organize vast quantities of information along a single map. The many tiles of your average Civ game are filled with data on everything from resources, through yields, to worker improvements. Civ V gives us a look at how user interface and level design can come together in harmony for a quality experience.

Uncharted 4: A Thief’s End: Yes, of course this is an excellent source of inspiration for narrative design, but to really experience that, you’d need to play the whole game. Instead, we can look at this epic conclusion to the beloved franchise as an excellent example of level design, as well. The game’s environments gracefully lead the player towards their goals, without the maps feeling too linear or constricted. The Uncharted series, in general, has a way of making us feel like we’re exploring an open-world. And then, when we seamlessly find our way to the right spot, we feel that much more accomplished.

The balance of challenge, chance, and control are difficult to achieve. It’s what makes games so impressive and so difficult to design. If you’re looking for good inspiration on designing systems for games, you may want to check out Hearthstone. Card games, in general, are almost always entirely system-based, so understanding the mechanics of how players succeed, fail, and maneuver throughout the experience is sure to be vastly educational. In addition to its heavy focus on strategy, this quick-paced card game features beautiful art and lore from Blizzard’s celebrated Warcraft universe. Not to mention, it’s free.

Pokémon: We’re all familiar with Pokémon as an RPG, where we battle trainers and collect these strange but wonderful creatures along our journey. But it’s important to remember that there’s an entire system of statistics at play underneath the hood that are dictating all of our successes and failures. Taking a look at all the numerical complexities that exist behind some of our favorite pokémon and trainer items is a great way to further understand the complex balances that must be achieved in good Systems Design.

Dungeons and Dragons: There’s something beautiful about the idea of imagination based around math. This game system (and most tabletop games) establishes a set of rules dictated mainly by simple numbers and percentages. From there, the game’s only other variables are the chance of a dice roll and the players’ collective imaginations. It’s no wonder that this system launched an entire industry within gaming.

Chess: A classic for a reason. It’s a game almost all of us have played at some point in our lives, but have never taken the time to analyze. What makes the game so successful around the world? The balances between piece-strength, the simplicity and adaptability of the board. If you’re looking for some inspiration in Systems Design, look no further than the all-too-familiar 64 black and white squared game board.

Inspiration for Game Design in General (There is No Game)

(Screenshot of There Is No Game)

Sometimes, it’s nice to just be reminded why we enjoy making games in the first place. If you’re struggling to find a concept or just struggling with a desire to continue developing in general, check out the game (and yes, this is what it’s actually called) There is No Game. This 2D not-puzzle game is a humorous and enjoyable 4th-wall-breaking experience, where the goal of the game is to actually run the game. In a weird kind of way, the very act of playing is a victory in and of, itself. It’s hard to say much more than that, you’ll just have to check it out, HERE. But just in case you find some trouble getting started and need a hint, don’t forget to click the “O”.

Portal 2: Like its predecessor, Portal 2 is one of those rare games that makes us proud to be working in this industry. It’s compelling and challenging enough to satisfy even some of the most hardcore players, but light-hearted and accessible enough for almost all demographics to pick up. Beyond that, it’s an enjoyable and even educational experience. It’s likely there are at least a few people out there who don’t like this game, but honestly, I have yet to meet a single one.

Your Favorite Game: When we spend so much in development, it can be easy to lose track of our inner-player. When you have some free time, pick up a game that you find compelling and ask yourself why you feel that way. What is it about this game that draws you in? Find the answers to that, and you may just find inspiration where you least suspected to find it.

It can be easy to dismiss other games by saying, “My game is nothing like that.” Or maybe, you feel a sense of responsibility to generate your own ideas and motivation, internally, without relying on external stimulation. But take a moment and think of it this way.

Finding inspiration in games isn’t just about kicking your own creative juices into gear. It’s also about continuing the collective push on what is possible with games and human experiences. Revisiting some of the greatest games that have been created might spark a new idea that you’ll develop. And that new idea will go on to inspire future generations, afterwards.

Inspiration is the fuel for initiation, but it can also be the first step for innovation and collaboration.