7 Popular Game Features that started out as Bugs 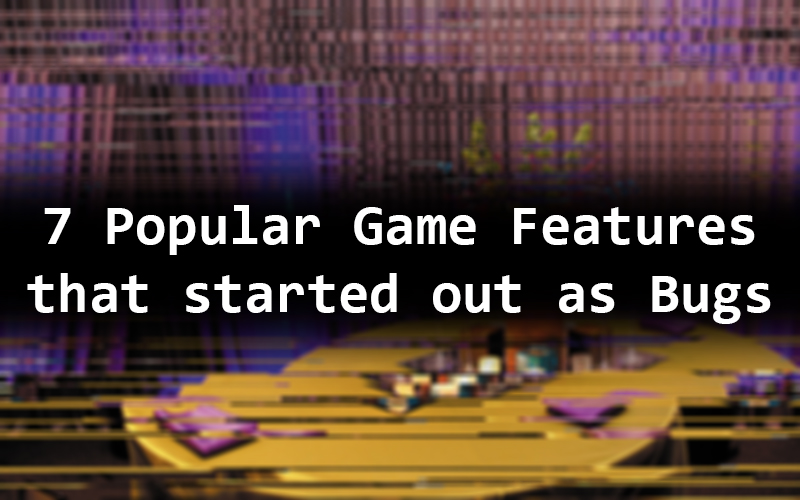 Gaming is rife with ideas, technology, and stories, but sometimes even unintentional flaws are the basis for new features or can spawn new branches within a game’s community and benefit to its longevity. Some of these mechanics and features were noticed before release, and sometimes a simple screw up ended up being featured within the game. It probably has happened multiple times in many games, although this list covers some of the most popular games to contain features that originated from development mistakes or bugs.

Probably the most iconic creatures of Minecraft, The Creeper is also a mistake of the popular survival game. The Creeper is a creature that silently moves around the game world and once in closer proximity to the player makes a hissing sound just before exploding. It is probably the most hated of the various enemies in the game because of its silent presence and the fact that it can damage things you have built when you least expect it.

In an attempt to create the first passive mob during early development of Minecraft, the creator Notch, aka Markus Persson, made some code to construct a pig character. Instead of inputting code for the length of the body of the creature he modified the height instead. The result ended up as the creeper—at the time with a blank texture applied instead of the green we see today. Due to the unique nature of the mistake, it was decided to leave this in the game as an enemy.

Rocket boosting, also known as rocket jumping, is the technique of using a rocket launcher’s splash damage underneath a player whilst jumping to extend the distance and height of the resulting jump. There is a massive risk and reward element to this as shooting underneath yourself will, of course, take away a severe portion of your health points. This tactic is rarely used within public online games and more often seen been used within the speed-running community.

Rocket boosting wasn’t only seen in one game: the most popular appearances were in the Quake series and also Painkiller games, with a recent appearance in the newest release of DOOM (2016).

A bug was discovered in the retro classic of Street Fighter II by its producer Noritaka Funamizu. This bug was dubbed animation canceling because it allowed for certain attack animations in the game to be interrupted by issuing other attacks. Players would use this advantage to chain attacks together allowing them to initiate a continuous flow of attacks, although a lot of practice was needed to pull this off successfully. Funamizu thought that due to the difficulty of making the canceling bug reoccur, he would never need to fix it. It wasn’t a bad decision, though, as once people learned how to use animation canceling, it allowed for players to have a chance in any tight situation of play.

This small bug revolutionized the fighting genre for years to come and become common place within fighting games. Of the latest fighting games, combos are seen as the bread and butter of gameplay and some games make it required for players to learn basic combos to be able to compete online. In high-level play and esports championships, it is of utmost importance to know your characters extensively and that includes all combos for the characters used.

Street Fighter Franchise along with many other fighters utilize combos

Bunny hopping and air strafing are features that have appeared in multiple games. It first appeared in Quake engine games (by idTech), most commonly used by players within multiplayer to gain additional speed. After Valve forked the idTech engine to create the Goldsrc Engine, it became vital to learn bunny hopping and air strafing techniques in the total conversion mod Natural Selection. Once it caught on in Natural Selection it then started becoming natural with many players and was amongst the first things for newcomers to learn in most source engine games, Quake 1, 2, and 3 and also in the Painkiller franchise. Air strafing, in particular, is hard to master, but can benefit players in huge ways opening up more pathways through levels.

Bunny hopping and air strafing has been seen in:

Surfing today is now popularly known as a custom map type which consists of, in its most basic form, a level full of triangular ramps. The aim of such a strange level design is to strafe against these ramps in a curved motion in which you gain momentum and speed and each level can be designed as an arena, a race or even multiple areas with increasing difficulty. This idea came about due to the wacky physics at play within Valve’s Source Engine, as early as the first Counter Strike people discovered that surfing was a means of movement along certain slopes and given time people would formulate a method in which that mechanic could be turned into a separate mode of play. An important note to make with Surfing is due to certain default game configurations in the Source Engine moving your character whilst mid air is a difficult task. Within Source Engine there is a command known as sv_airaccelerate, which controls the amount of movement allowed whilst mid air and not touching anything. This value is normally changed to make surf maps easier to play, and this value normally would be different between different server tickrates.

As years went by maps increased in complexity and can essentially be split into multiple stages and different types. The most popular types of Surf maps are:

A well-known character from Team Fortress called The Spy has the ability to disguise themselves as one of the enemy team, allowing for sneaky infiltration into an enemy base. Back in the original Team Fortress mod for Quake/QuakeWorld, there was a glitch which made players sometimes appear as the opposite team. The development team for Team Fortress liked this idea so they made it so players can use that glitch’s side affect as an actual power used in normal gameplay. If it wasn’t for that bug we may have never seen The Spy.

Now the last feature that I want to talk about is very uncommon and I don’t find many people that know about it. In Counter Strike Source, there was a map type that cropped up labeled as trikz_ that took advantage of a few very specific bugs. Two of those bugs are as follows.

Flashbang jumping is an exploit of a strange and specific bug that involved throwing a flashbang under a jumping player so they can jump on top of it whilst it has upwards momentum to give them a huge boost in height and distance. As you may have noticed this would sound counter-intuitive due to the effect of a flashbang, although players developed plugins which disabled the white screen that normally would follow due to a flashbang being used.
The stack jump as I prefer to call it (to this day I don’t think it had an agreed upon term) involves stacking one person on top of another then running toward a ledge at the same time and then both jumping giving the top player a boost, similar to the flashbang jump only designed to eliminate massive height gain.

Maps such as trikz_ helped with the improvements on level design and scripting within the source engine, maps usually were laid out as stages or campaigns in which teamwork was necessary. Mapping tricks were learned by players who simply wanted to push the boundaries of setting up obstacles and challenges. What was learned could be used in any source engine game as the tool used is the same for most source games, the Hammer tool under Source SDK.

Flaws Can be Great

It’s clear that throughout the years of game development, mistakes happen. But it doesn’t always mean it’s a bad thing. Sometimes a fault within development can benefit the core of a game or it can extend years onto a game’s longevity. Flaws can be great, but of course, it is never recommended to make mistakes on purpose. At the end of the day as a developer, you can learn from these popular mistakes/flaws. It gives you insight on what players enjoy and their perspective on issues within games. Many games today wouldn’t exist if it weren’t for little things such as player intervention with a game bug or developers picking up on useful additions brought about by glitches. Always be cautious when encountering a bug, and instead of disregarding it at first (depending on how it affects gameplay), analyze it and see if it can benefit your product.