4 Reasons Why You Have No Excuse Not To Make Games 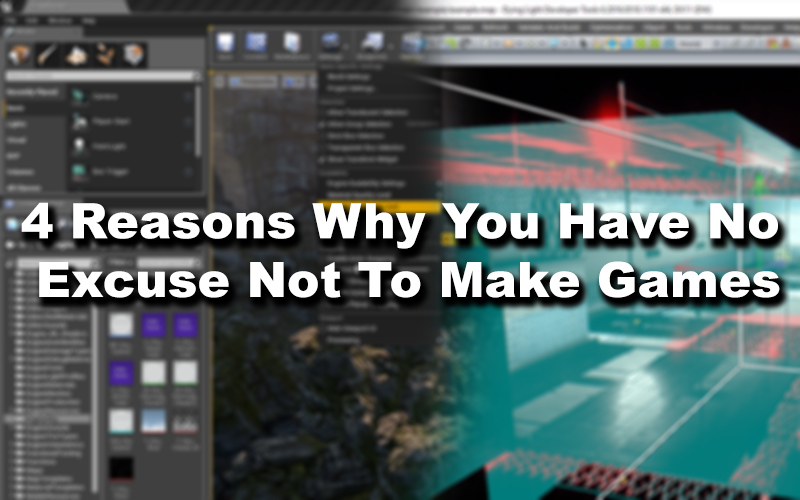 The last ten years in game development have been quite the rollercoaster with the constant update to game engines, the ever-growing independent developer community, and the major push in education for game development. Over that time it has become easier for everybody within a larger age bracket to start creating 3D assets or even a full fledged game from scratch and the accessibility for development tools is on the rise, especially with the free release of various development toolkits.

Developing a game may be a daunting task for most when the idea is first approached, although with the various avenues that people have access to today, it is extremely easy to get started. Over the past few years, many developers have released software and full engine tool-kits for the public to use for free. This is an amazing thing for the game industry as it allows for people to get a taste of the inner workings of development and as more people do this the more progression we get to see within game development and the more content that gets made, whether it is new titles or even just game assets. The most popular engine released over the past few years is Epic Games’ Unreal Engine 4 which only starts to charge you 5% royalty after you start making a minimum of $3000 for your game. You get full access to the development kit and even the entire source code. It is also extremely appealing because Unreal Engine is extremely flexible and can deliver amazing results on top of it being one of the most used engines in gaming. It has been utilized and modified for a plethora of games and has seen many interesting changes. Developers have even gone beyond the standard envelope of developing with Unreal, Rocksteady and Ubisoft have created custom builds for some of their games. The Batman Arkham games have used a custom Unreal Engine 3 build that has been developed along with the game series and Splinter Cell has also used a custom engine build that started out with Unreal Engine 2.5.

Due to changes over the years, the use of this technology isn’t limited to AAA developers. The game The Vanishing of Ethan Carter, developed by small Polish team The Astronauts, was created on Unreal Engine 3 and was later was updated to Unreal Engine 4. What is different, however, with this example, is The Astronauts used a technique called Photogrammetry. Photogrammetry in the context of game development is used to survey and capture real photographic data to be added to the game world to achieve the most accurate and realistic details possible. The process involved taking photos of real world objects at every possible angle and that data was then put through a software called Photoscan and then turned into game assets. Another two popular engines that are used often are Unity and CryEngine. Unity can be downloaded for free for personal use although to use commercially you have to pay a fee. Crytek’s CryEngine however only can be accessed through a ‘Pay what you want’ payment model.

2. You Can Be Your Own Team

With the ever-growing independent developer community, getting help with your project is very easy. Tutorials and information resources are scattered all over the web and are literally at your fingertips. Even starting out as your own boss is a viable option: many developers have taken that route when it comes to development and it has become extremely profitable and rewarding for them. There are quite a few developers that have already gone this route and have garnered positive reception in doing so. Elliptic Games’ Brendan Anthony is a prime example of such a developer. Brendan designed, produced, and programmed the game known as Rodina. Another developer is Cyril Megem, who created the more recent title Warshift, and there is also Tom Francis, creator of the highly popular Gunpoint and the in-progress game Heat Signature.

These games aren’t simple either, they offer some great range in genre and gameplay which shows that even one person can create something special. Rodina is a space flight adventure with slight simulation gameplay that uses large in game distances where you have to end up utilizing faster-than-light ship speed to travel in-between planets, with planet sizes that range up to a ~4000 KM radius. Warshift is a hybrid strategy game that utilizes third person gameplay mixed in with real-time strategy elements with multiplayer and single-player modes, it also looks beautiful. Gunpoint is probably the most popular example, it is a 2D pixel art stealth action puzzle game that has elements of hacking added in. With the above examples, it’s easy to see that even with one person it is possible to create a successful and functioning product.

Valve allows for independent developers to submit game project ideas or concepts to Steam Greenlight. Steam Greenlight is a service run by Valve in which you can pay a fee of $100 USD to submit a game concept in the public spotlight. You will get feedback on whether potential players would be interested in buying your game. As of writing this article, there have been over ~8500 projects that have being green-lit with Steam Greenlight and ~4000 of those have been released to the store for sale. Greenlight will allow for you to identify your core audience and get input on how you can further shape your game. For a successful submission on Greenlight, you will require an informative yet concise description telling players about your game and what you plan to put into your game. Creating a showcase video is also required to give players a good idea of what you are making, even if it is early in its progress. This is key because many people will judge your product based on a video alone. Once you have included these things finish off with a quick rundown of your product with bullet points of the most important things and if possible add any positive press you may already have received about your game.

Another option supplied by Valve is the Early Access option which will allow you to submit a game for sale and develop it whilst the community can support and have ‘Early’ access to it. As a developer, you have the ability to connect with your community early, get crucial feedback and bug reports from hundreds of early purchasers, and you have access to update and patch the game at your own leisure. It’s probably good that you have a somewhat playable product for Early Access as that will show confidence with players who browse your listing on the store.

Steam Greenlight as seen on Steam

If you aren’t up to creating an entire game you can do the next best thing and creating in game assets for a game that already exists. As most of you will already know this is normally known as modding and be done in various games albeit it normally relies on either official or third party support with access to certain game files. There are a few key ones I’d like to talk about.

There are many other games in which you can mod for its also a great way to extend the longevity of a game’s community given there are enough people making content for it. An insightful note to make – when modding is to never do it with the aim to make any kind of profit, even asking for donations would be a mistake. My recommendation is to establish a project, work on it, communicate with any fans and show that you have a passion for what you do, and later on once you have established a fanbase for what you have created add in an option somewhere for people to donate to you but only subtlety put it out there for people to see. Modding is never really about the money, its always about creating more for a game, it is about community and sharing what you know so that others can join in too which then adds to the longevity of that game and its community.

Modded Screen from ‘Stalker Call of Pripyat’, Stalker has one of the most active modding communities

You’re Out of Excuses!

As of today, getting into game development has never been easier, with the tools and support that everyone has access to for free or at a low cost it shouldn’t be difficult for anyone of various ages to get started.

I have listed some of the available tools you can get, which platform they support and what their pricing model is: