Storytelling, Conflict and You: An Interview with Christopher Brendel (Lifestream) 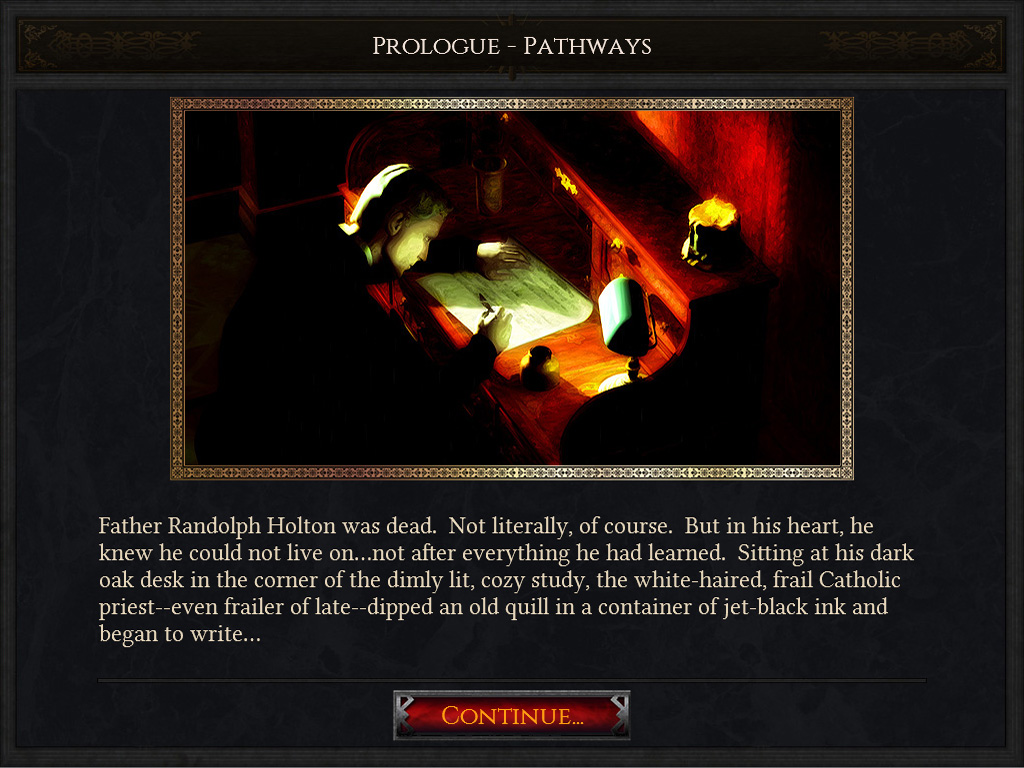 We’re working with Christopher Brendel on his project Lifestream, now on Greenlight, and had the chance to ask him a few questions.

1) Tell us a little about yourself!

My name is Christopher Brendel,  I am an independent game developer (one of the “original indies,” according to the adventure community) and owner of the indie studio Unimatrix Productions, which has been around since 2003.  I knew that I wanted to make games when I was only eight years old and played my first computer game, Police Quest:  In Pursuit of the Death Angel by Sierra Online.  I grew up feeling drawn to games that focused on quality storytelling rather than flashy graphics and fast-action gameplay, such as those found in early adventures and interactive fiction.  And so I spent my childhood and teen years teaching myself how to draw, how to write, and how to program.

When I was still in high school, I started designing my first adventure game, which would ultimately become my first commercial title, back in 2004–this was the original Lifestream, upon which my current release is based.  It was a first-person adventure game, in a style similar to classics like Myst.  Since that, time, I have released two other commercial adventures, Shady Brook in 2005 and The Filmmaker in 2010, and one interactive fiction title, Treasure Seekers of Lady Luck through Choice of Games, LLC in 2013.

Having gotten a taste for writing interactive fiction with my latest title, I decided to combine my love of adventure games with interactive fiction to create the brand new Storycentric Worlds game engine, which features a unique hybrid of both styles of gameplay.  The culmination of that endeavor has been the release of my current game, an expanded remake of Lifestream.

2) How long have you been working on Lifestream?

Not counting the development time associated with the original adventure game upon which Lifestream is based, development took approximately two years.  The bulk of this time was spent developing the Storycentric Worlds engine itself, which works natively on the PC, iOS, and Android.  An HTML5 version of the engine is in development, as well.  Once the engine was in a stable state, Lifestream itself–the gameplay, script, audio and visual assets, and testing–took around six months.

3) What’s the biggest challenge you had to overcome in development? How did you do it?

The biggest challenge a developer faces anytime he is making a hybrid game is making sure to balance a game’s mechanics so as not to alienate the fan base of either of the two genres featured in the fusion.  In this case, Lifestream is a fusion of adventure games and interactive fiction.  Deciding how much of each genre to implement into the engine took a good deal of testing and feedback.

For example:  traditional interactive fiction does not feature artwork, but traditional adventure games rely upon visual storytelling.  So I had to ask myself:  how many visuals should I feature, if any?  Should the visuals contain animation?  And so on.  Deciding upon the right balance is essential to the success any time you try something new, and so I relied heavily upon feedback from testing to achieve that balance.

4) Tell us about a funny story, bug, or situation you got into during development.

Lifestream is my first cross-platform game, and so its release was the first time that I have ever worked with both Google Play and iTunes Connect.  Prepping my game for the platforms was not problematic, and setting up its release on Google Play turned out to be quite easy.

I had a bit of a scare with iTunes Connect, however.  After setting up my game’s store page (description, promotional images, etc.) and uploading the first build, I chose to have my game release to the public automatically on the exact date I had announced.  I then clicked the “Publish” button, presuming that it was the iTunes Connect equivalent of “save changes.”

Little did I know that clicking on that button bypassed the scheduled release date and instead immediately put the game on the store!  Two minutes later, my game was live, and I started to panic!  After all, the game wasn’t supposed to be released for another two weeks.

Luckily, I found a way to remove the game from the iTunes Store, and so everything worked out for the end, and I now have a much better understanding of how to work with iTunes Connect.

5) The game has a lot of very distinct, dark thematic elements. What inspired you?

I have always preferred dark, character-driven stories over the types of things we typically see in most mainstream games.  To me, the most intriguing tales are those that feature internal conflict rather than external.  Despite the fact that hundreds of new games are released each week in today’s industry, few actually take the time to focus on storytelling.  This, to me, is a lost opportunity.  I believe that, while gameplay is, of course, a central component in game design, it is a game’s story that sustains a player’s interest throughout the game.  Yet storytelling is also the weakest aspect of the vast majority of today’s titles.

My goal is to change this.  One of Lifestream‘s protagonists is a Catholic priest–this is something you do not typically see in games.  The central conflict in the game is not that of an external threat but that which exists only in the priest’s mind:  it is a conflict of faith.  The protagonist is morally-grey.  His internal struggle fuels the story and gives players a personal connection, so that when external conflicts do arise, we feel them alongside the characters.

This is something that is seldom done in games, but I believe that it sets mine apart from the mix, and so far feedback has been fantastic.  It is my hope that other developers will ultimately begin to focus more on storytelling, as well.

6) Where do you see the game going from here?

Lifestream is the first in a series of games that I am producing with the Storycentric Worlds game engine.  Each game, while featuring a standalone plot, takes place in the same universe.  Those who play each title will discover crossover elements–characters, references, foreshadowing, and plot points.  These will culminate over time with the release of a title that tells an epic story featuring plot points of each of the preceding games.  So while players can, theoretically, play individual games in the series and not feel as though they have missed out on anything, those who play each game will discover that larger things are going on in the background.  Imagine putting together several jigsaw puzzles.  Each, when finished, shows a distinct image…but when the puzzles are all put together, you discover that all of the images combine to achieve a much larger, more detailed picture.

Ironically, Lifestream, while featuring dark elements, is actually much less sinister than several of my upcoming titles.  My next game, Shady Brook, is a dark mystery about a writer who moves to a small town with a disturbing secret.  It features conspiracy and elements of the occult, but it is also first and foremost a drama in the style of Twin Peaks.  Shady Brook is scheduled for release late this summer.

7) If you had to give one piece of advice to indie game developers, what would it be?

Not to sound cliché, but my first piece of advice is to “follow your dream.”  More realistically, I believe in the saying, “Keep your head in the clouds but your feet on the ground.”  The key in making games is to start small:  make a game that you can realistically finish.  Don’t worry about the quality of the graphics–focus instead on making the game’s mechanics good.  Then release it (for free) and expect to hear a lot of feedback–both good and bad.  Listen to that feedback, don’t be hurt by the negative comments, and improve your skills as a result.  Then keep making games.  Eventually, one of them may be good enough to sell.

One of the biggest mistakes I see new indies make is to release your very first title on Steam Greenlight.  Don’t do this, as it will only turn gamers off.  Instead, focus first on developing your skills and drawing in an audience with free titles.  Wait to go onto Steam and other similar services until you’ve made your first hit.

Don’t get discouraged (it isn’t easy in the early days!), and eventually, with a lot of hard work, you will find your success.

Make sure you check out Lifestream on Greenlight!