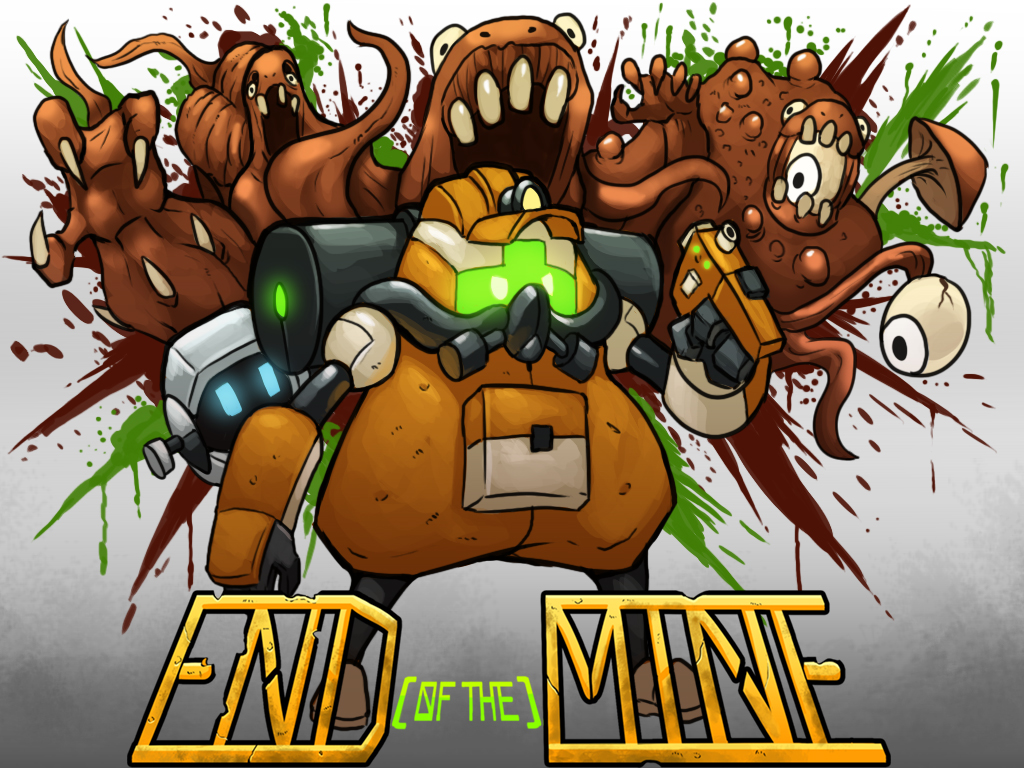 We’re working with Joseph Bussey and his team at Skirmish Entertainment on their project End Of The Mine on Kickstarter and Greenlight. I asked him a couple of questions about his game, team and journey!

1) Tell us a little about yourself and your team!
My name is Joe and as a child, I was introduced to many of the popular consoles such as Atari, NES, SEGA, Super NES, etc. It was something about this digital world that captured my attention and challenged me in new ways more than anything else I had been exposed to at that time. As I got older, I began working at a job I had no passion for, followed by 8 years in the service. I decided to make a life change and try to make a living doing what I have always loved: video games. I reconnected with that digital world and began to pursue a degree in game art design. After going to school and making connections with a sharp group of like-minded individuals we decided to go for it and pooled our collective talents and passion into development of this game. Our team is all heart and passion, we do this because we love it, we do this because we want to make it better, we do this because we have something to offer and we aim show the gaming community what we have come up with.

2) What motivated you guys to start work on End of the Mine?
We started developing a character that was a concept of our art director, Chris Humphries. After brainstorming the world he came from and what his purpose was, we knew we had something special. As we got deeper into development things just kept falling into place as if it were meant to be. There’s a feeling where you just know everything is right. Every day as we put concepts together, assets, animations, levels, etc., the atmosphere became electric and we pushed ourselves and each other do more and be innovative. It’s the freedom of developing a project that is your own that makes you want to do more and strive for the best that you can do.

3) What games or concepts influenced development of the game?
We’ve seen a few mining games here and there and we decided to take a spin on the traditional mining game. We decided add horror elements but with a comedic twist. With this unique blend between sci-fi horror such as predator and aliens and comedic hijinks we hope to bring something new to the table.

4) What would you say is the #1 challenge you’ve faced in developing End of the Mine?
We have faced many challenges as a team and I think the number one challenge is the unknown. We can’t tell the future, don’t know how things will turn out and at times it can be a bit daunting but we have encouraged each other and pushed the extra mile to face that challenge every day. End of the Mine at the end of the day is a labor of love from everyone on our team and when you love something you want the best for it and for it to succeed.

5) Why have you guys turned to Kickstarter for funding?
Kickstarter was one of many choices but at the end of the day we know they have a great community following and that’s what we’re really after, we want to reach out to people and show them what we’re doing. We felt that Kickstarter as a platform could provide that and we hope that it reaches as many people possible to showcase what we have in store for the End of the Mine.

6) Do you think Kickstarter is the best way for indies to get funding nowadays? Why? What other options do they have?
As far as if Kickstarter is the best way for indies to get funding I can’t be sure that it is one way or the other. I think the main thing is social presence, there’s only so much any website can do and it all comes back to us and how we promote ourselves to our true success with Kickstarter or not. I have seen some great games get funded 10 times over and I’ve seen some that miss the mark and to me and are still successful; the difference has been social presence. Certainly there are other crowd funding sites to use as an indie developer but social presence is key, you have to reach as many people as you can and get the word out for your project. At the end of the day you have to put in the work to be seen and that’s the most important part.

7) What kind of preparation did you do before your campaigns, and what advice would you give another developer looking to launch a Kickstarter/Greenlight campaign?
Before we started our Kickstarter we did our research. We wanted to know what other successful Kickstarter campaigns have done to help mold our campaign in our own way that works for us. We talked in length about what rewards we would offer our backers and what things they could look forward to if we reached our goal and then some with our stretch goals. We made and prepared all artwork and attractive images to introduce our game to the Kickstarter community. In short for you future developers out there make sure you take your time and do your research and bring something to the table that you will be proud of to introduce your game. If you are truly passionate about something, it will show through. So, be passionate about what you are working on and keep moving forward. You don’t get everything right the first time, but eventually you will begin to get it right.

1. Everyone on the team is a volunteer, yep… No paid salaries here.

3. Our website is live and can be seen at www.SkirmishEntertainment.com